Tonight I tested the adhesion of 7 glue sticks,

Tonight I tested the adhesion of 7 glue sticks, 2 wet glues and 1 hair spray.

Since I’ve successfully printed ABS on mirror glass at a temperature of 70C using UHU Stic for quite a while now, tonights’ tests were done under the same conditions. The adhesive medium is applied to cold glass.

Here are the contestants;

Only two were usable under the set conditions. 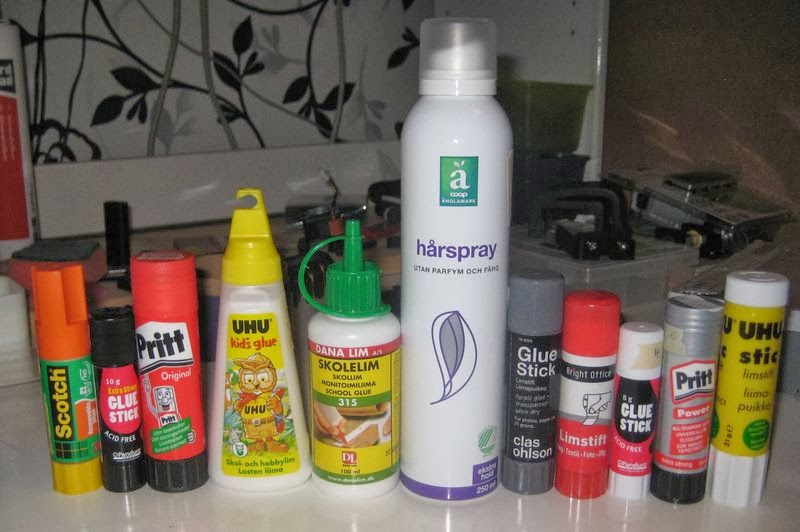 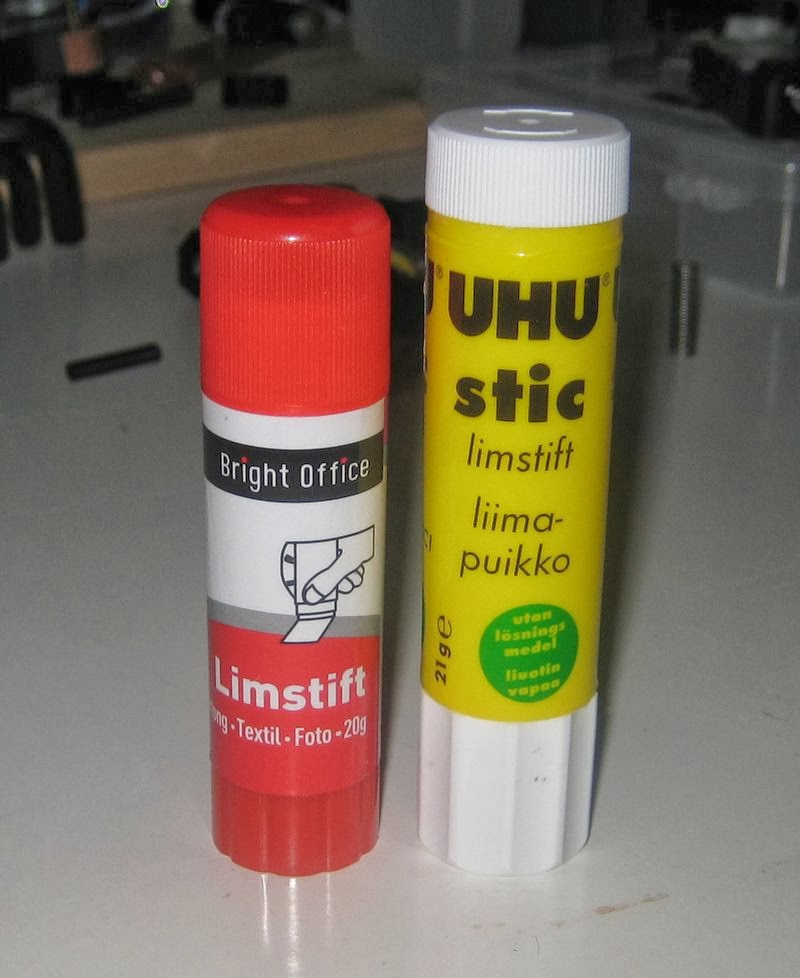 It’s interesting you tested the Pritt power glue stick. I know some people who swear by it. I have tried it myself with less than stellar results.

So you are saying that if you use UHU stic on glass (applied when cool and let to dry) you can print ABS at the low temperature of 70 degrees. If I can find some today I’ll give it a go tonight.

One question: for your first layer, do you have the head really close to the bed and squish the ABS down hard?

Only really cheap extruder hold Hairspray works ime, the expensive stuff has too many additives

Try this once. Go to the auto parts store and buy cheap window tint. It’s tricky to put on, like a big vinyl sticker, use water with a couple drops of dishsoap in it to wet the glass and adhesive. Once it’s on, I print pls, abs, nylon and pet on it, SUPER clean bottom layers. ABS at 90, PLA at 60 and pet at 69 nylon at 85-100 depending on part size. Lasts until you scratch it off. Best to let it cool completely first

I noticed that Ultimaker send a stick of Staples glue with their machines. Should be easy to find a Staples almost anywhere I guess? @J_O11 I think the window tint is PET. Tried the cheapest one from “Biltema” but that was not PET

Sticking to diluted PVA for now. Will pick up a glue stick at Staples next time I’m there.

@Ben_Jackson some of the other glues I tested hade minimal-to-some adhesion so they might actually work at higher bed temperatures. I’ll post a link to a bit more details later on.

Yes but I’ve found that I get the best adhesion with UHU Stic if I apply a couple of layers, and then add another prior to the print for a couple of prints. If I print big objects I usually apply some fresh glue before the print. It can be applied at 70C too.

UHU stic is a bit cloudy, hard and non-sticky to the touch when dry and the surface gets pretty rough over time due to layer build up. That’s why it’s currently second choice on my list.

The current number one on my list Bright Office is interesting. It’s clear and got a sticky rubbery feel when dry. I found the object stuck very hard to the bed but as soon as I got a thin knife under the edge it came off easily but not in an instant pop but rather slowly and controlled. The object left a visual imprint on the surface but that area has still got the sticky rubbery feel so I will continue testing it and see when/if glue needs to be reapplied again.

I am currently using a QU-BD nozzle which is very pointy and lacks a flat area around the orifice which I find a bit unforgiving compared to those with flats so I can’t be too far from the surface. However I don’t feel I am running any closer to the bed than normal when using glue stick. I am just barely able to slide a 80g A4 paper under the nozzle.

With UHU stic I run my first layer slowly at 20mm/s to get good bond. I also use the brim feature when slicing so that the first layer is expanded in all directions. This is awesome for adhesion regardless of bed material.

@Tim_Rastall Änglamark is cheap, no colors or perfume but didn’t work at 70C. I did see some adhesion so maybe if I had gone hotter.

@J_O11 thanks! That’s alittle hotter than what I aim for but maybe I’ll go talk to the local sign maker and see if I can get some plastic film scraps. With any luck they even know what material their different films are made of.

There is no Staples in Sweden but if it’s amazingly good it could be worth ordering in big packs.

I haven’t seen the Bright Office stuff here. Have had a go with UHU, but it was only one layer. The failed during the first print layer. Will apply a few more layers of glue and try again.

@Ben_Jackson I’ve contacted a reseller to see if I can get hold of a data sheet or list of the contents.

Good idea. It would be great to figure out what it is to actually make it work. I’m trying to replicate your finding here. If it does not work for me there could be more variables involved.

Keep up the good work!

Having great luck with a Staples glue stick on glass at 80C. Would probably work fine at lower bed temperatures but haven’t tried yet.

Second attempt with the UHU also failed. really early on (around the fourth layer). I used a few layers of glue and the glass was quite cloudy. I left it to dry for about an hour. but noticed that when hot, the glue was still a bit tacky.

Third time lucky. I used a lot more glue this time and heated the bed to 75 degrees. There was a tiny amount of lifting, but it didn’t really leave the bed. You can just see where the glue was stretched a little.

@Ben_Jackson staring to look good. As usual in 3D printing there is probably a number of factors at play too. What temperature are you extruding your ABS at? I’m printing at 240C (not measured physically).

Have you tried these vs. the 3D Systems Glue Stick? I kinda hate 3D Systems as a company but the glue stick is amazing in my daily printing.

@Chris_Milnes no. Could you describe how it behaves? Can you go as low as 70C?

@korpx I use 245 degrees for ABS, so there is not much difference there. So in my previous photo you can see how thick I applied the glue. Is that how thick you had it?

When I look at the part, the bottom layer is not as flat as when I use Kapton. Obviously the first layer is being embedded in the glue and not quite getting squished hard up against the glass. The lines of the first layer are still curved, this gives it a bit more surface area for the glue to contact with.

I also think that the shape of the item has a lot to do with it’s adhesion. That object was pretty square and not very high. I did previously try an object that had a lot of overhang lower down.

What object were you printing in your testing? Perhaps I can test with that as well.

@Ben_Jackson it’s not easy to compare exactly from the image but I think it looks about the same. I might even have it a bit thicker.

When printing real objects I normally tend to touch up the surface with the stick prior to an actual print evening so the glue is building up over time, but since it’s easy to switch glass plates when it gets too much that’s no problem.

You are right, the bottom layer doesn’t get the glossy finish you’d get on Kapton or straight on glass. It’s okay with me though. I am not really a fan of having one side glossy and the rest matte/rough.

In the test I printed a very simple object to get a fast print and a reasonable initial test to see which of the glues would be worth experimenting with further. The test object was a approximately 15x60x1mm plate where one end has straight edges and the other end is a circle shape. A bit like as if you cut your thumb off and view that piece from above. There is a smallish hole in the middle of it to include a small perimeter.

I have used the UHU stic for quite a while prior to the test printing real objects like the Airtripper bowden extruder with no problems with warp/lift. As mentioned earlier I usually add one layer of glue at the start of a printing session to be sure to get no corner lift/warp. I do not wait until dry for normal prints.

I busted another print plate tonight so I decided to give the glue stick a shot on the next one. I used an Avery Permanente Glue Stic that we bought in bulk like 2 years ago during a back to school sale. I’m doing some ooze calibration after replacing the extruder gear and so far after about 15 prints in the same place on the plate I haven’t had to replace the glue yet and I’m not getting any lifting whatsoever. I have been starting the printbed 75 just so I don’t have to wait so long for the bed to heat up then crank it up to 90 for the rest of the print to hold it. As soon as it drops to around 60 it just pops right off.

I’m not getting the nice smooth shiny surface which I do enjoy, but if I really need it I can always use a fresh sheet of kapton tape for special prints. This is soooooo much better than the ABS glue I have been using forever. 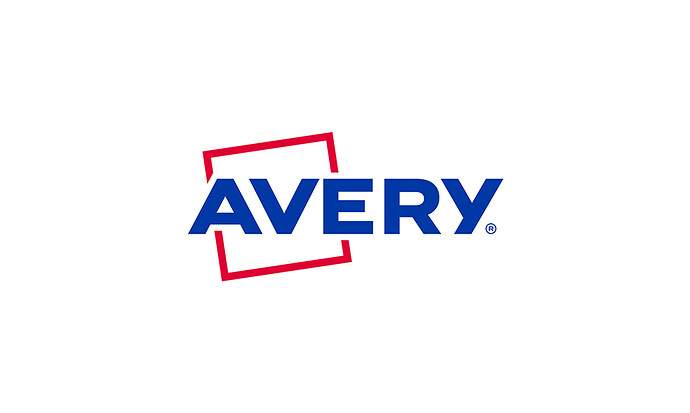 At Avery.com, you'll find office supplies and products such as labels, dividers, notetabs and binders. You can also browse our website to find ready-made templates, great project ideas, free downloadable software and more. Get started now!

Got a little lifting on one corner of a tiny cube no brim so I may bump the first layer back up a little. Was printing it at 240 but I’m trying to work out a few issues.

One last thing, I put it on cold then heat it up to set.

@korpx I have been printing with ABS for a while now. I have changed to an 80 degree bed and have had some really good results. The last thing I printed had zero warping and once the bed cooled, when the job was finished, it popped off the bed all by itself!

I simply add a little more glue after each print. I’m getting pretty consistent results.

Big thumbs up for UHU Stic!

When I run out of that glue I might try some others. The key for me seems to be that you need a think layer.