I recently ordered my K40 and I am currently waiting for it to arrive. I will be keeping it in my garage/workshop. That garage has exterior walls on three sides (rear of house, side 50 feet from neighbors house, and front yard). At this point my plan is to use rigid duct pipe and an in-line fan to vent to the outside with the fan just before the outside vent. Would a six-inch inline fan be sufficient? The specs say it is “160 CFM free air to maximum boosted air 250 CFM”. Anything else I am forgetting?

Hi Dustin and welcome to the Forum! A 6" in-line fan is usually sufficient for a K40. That’s what I’m currently running.

Awesome, thank you! I have a 27 gallon tote with a better pump for cooling and a compressor for air assist. I am looking into installing interlocks and am going to add an analog current meter (coming tomorrow).

Please feel free to share what you make or if you have any other questions let us know.

As I prepare for my laser to arrive, I am setting up my work area. I plan to use a table in my workshop that is adjacent to my exterior wall. I will vent through the wall. The original plan was to use rigid duct pipe. Could I consider using PVC pipe? I like the ease of working with PVC vs the duct pipe.

Folks that have run corrugated ducting materials suggest that with a lot of use they get pretty dirty. Therefore smoother surfaces are probably better for flow and cleanliness.
I know for woodshop use PVC can build up static charges and are grounded to prevent wood dust fires. Don’t know if that is a concern in this use case but you can search on vacuum systems for woodworking and get some ideas on grounding.

Interesting point. I was unaware of that potential problem. Grounding it wouldn’t be an issue for me. I have not worked with duct pipe before. That’s the main reason I considered PVC.

I would suggest smooth metal duct rather than PVC, with semi-rigid metal duct where you need flex.

BTW the comment on dust explosion in pvc vacuum systems was not intended to scare you off of using it. It was just an FYI.

I use have used pvc for dust collection for years and have had no problem and it does not corrode, seals and fabs with ease.

When it comes to grounding, there are lots of disagreements in the woodworking community about explosion hazards from dust. I decided it was easier to run bare ground wire through my vac system and connect it all to ground than it was to come to an independent judgment that explosion hazard was impossible, when I keep my shop as desiccated as possible, and get shocked every time I touch my mill because I stand on interlocking foam blocks for foot comfort. I have made no independent judgment that the explosion hazard camp is right, I just figured that a spool of bare copper is a cheap way not to worry about it.

I just like metal where there’s any fire hazard, and metal duct is really not expensive.

Better safe than sorry is mostly a good approach.

Dust explosions are not a fantasy they do happen! I think the debate is over what causes them and how to prevent them.

I am not entirely convinced that a wire is enough to stop a spark in an insulating container lined with dust. In fact in some ways I wonder if it can cause a spark inside of the piping by creating a differential and a place for current to flow. I don’t know :).

I have seen charged sawdust stick to just about anything including metal.

My approach is simple I insure I run the vacs long enough to clear the lines and that leaves the PVC free of dust. I suppose that a spark could still happen while vacuuming but there is not that much to ignite. I also insure that dust is cleaned up after every session.

This is one of those things where one weighs the situation and decides what is reasonable risk.

Dust explosions are not a fantasy they do happen! I think the debate is over what causes them and how to prevent them. 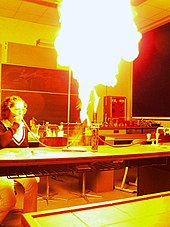 I grew up in the midwest, silo explosions were well known and still feared, and the Washburn incident from 1878 was still cited. The questions I saw about shops were asking for documentation of home shop wood dust explosions attributable to lack of grounding in PVC vac systems. My cyclone is translucent PE, and it’s super clear that charged sawdust sticks to the inside of it. I don’t have grounded copper wire dangling into it and have been wondering about adding that too.

I don’t think that a significant dust hazard would exist in a laser exhaust system; I’d expect the most flammable byproducts not vented to coat the wall and be thermally coupled to it so that they might add to conflagration but be unlikely to start it, and I don’t see how there would be dust explosion hazard with a laser.

I have not worked with duct pipe before. That’s the main reason I considered PVC.

It’s not too bad. It’s mostly slide together and seal with aluminum foil tape, put short sheet metal screw through to fix in place. The rigid pipe has a seam the long way to make sure is closed, and I’d seal that and every other gap at least on the exhaust side of the fan (and, for me, the exhaust side of the laser up to the fan, too). The main concern is sharp edges; I still have a childhood scar from handling a sharp piece of custom-cut ductwork. But the pre-fab pieces you can buy at the big box stores have in my experience less sharp. I’m still just as careful though!

What I definitely don’t like is the plastic flex hose. One fire in there and you’re setting who knows what kind of plastic on fire.

Ultimately, I personally think dryer vents are a bigger fire hazard than laser cutter vents. If you’ve ever used lint as tinder to start a fire, you’ll know why. Catches quick and easy and burns very hot. I won’t use plastic flex hose for a dryer either.

Excellent information from all! I believe that I am going to keep my K40 on a table that is in the corner of my garage. This means that I can vent it through the adjacent exterior wall. So, distance from vent to wall (not including routing and all) might be as little as two to three feet. 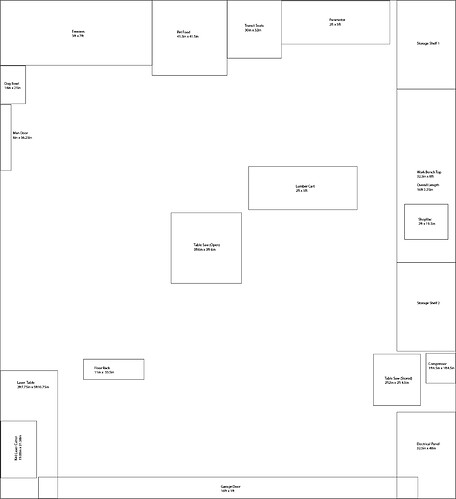 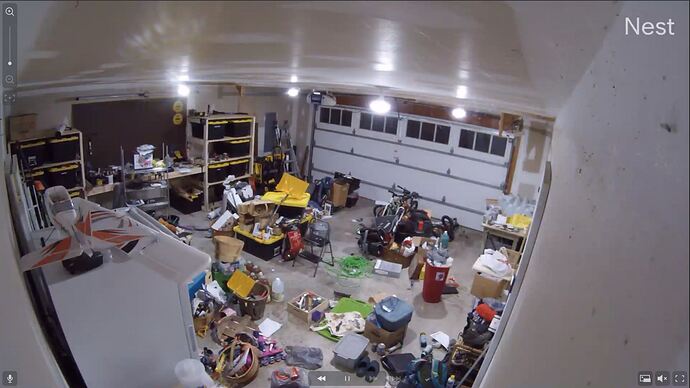 I did not use PVC for my laser simply because it is in the garage and I had to be able to move out of the way for a car.
I used corrugated flex pipe (metal) with clamps so that I can disconnect it from the window exit and store it in front of a car.

A clean shop is an unused shop ;)!

BTW, one of the other pieces of advice I saw somewhere, probably here, was that the wall outside your vent will get dirty from the smoke. I’m trying to decide whether to extend my vent away from my wall, or just put a sacrificial layer of something over that bit of wall to avoid “painting” it with combustion products.

I was thinking about that. How far is far enough?

That is probably a cube law thing (because volume, _he waves his hands around vaguely) and might depend on whether you use a louvered vent. Computational fluid dynamics is not my thing. I’m guessing it depends on how turbulent the flow is. I bought a louvered vent before thinking about this. Now I’m thinking about a powered gate on the inside of the wall, and something to try to generate laminar flow at the exit. Packing it with short segments of small-diameter thin-wall stainless tube?

The more length you add the more impedance you have, too.

No answers from me, only more questions!

Michael, way more things to think about! I would love to run the duct all the way up to a stack 3 feet taller than the peak of my roof, however, I don’t think that is an option… So, I will have to have some sort of sacrificial material. And, to avoid inciting the neighbors, I might save stinky cutting for when it is night time.

Unless are right next to your neighbors (really close) the smell usually is not much of an issue from what I’ve been able to determine.