those savvy with programming please help.

those savvy with programming please help. I need to SSH in to the BBB so I did and was able to use debian for login and temppwd for the default password. is there anything else I need to type in before I can do “updatedb” ? how do I locate redeem.py?

ok found it. I think this is where I need to be

yes, but remember to do make install if you modify the sources there. The code isn’t run from that location.

ok did nano and added a new line I call it “DELTAPRINTR” all c values taken from steinhart calc.

so I’m not quite there yet? what do I need to do “make install”? sorry I’m complete noob here

you only added it to the original source files, not the actual code that is run. execute ‘python http://setup.py clean install’ in the redeem folder

Which redeem? The top one?

done. did exactly that line and I can see the new thermistor line I put in. Thanks! 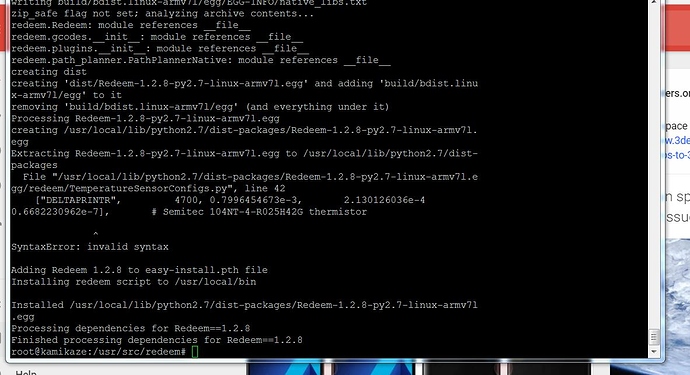 I think I will change my values to follow the number shown there.