I started work piecing together the frame. I started to regret making it only 1 meter high, though 1.5 meters would be absurdly high. I compromised by making 3D-printed plugs that fit the bottom of the 4040 extrusion and add 20mm. They also hold a metal socket for locking 60mm casters that will add another roughly 66mm (with stem) to the height, so the overall lift will be about 86mm to the total height. Then I realized that I wanted some sort of cap on the top to hide the sharp edges, and if I made those caps 10mm thick I could slide all the horizontal extrusion up 10mm without any real change in overall rigidity, which ultimately moves the bed up another 10mm — almost 100mm total height increase, so that’s an improvement.

I designed a set of tap alignment jigs to make it easier to tap and used polished spiral-flute taps to power tap with my drill set to slow and alcohol as a lubricant. Worked great; never worried that I was going to break a tap, and it was fast. Then the caps on top are attached to the posts with 5Mx16 flat-head screws. I think it’s a nice look. The top caps and bottom plugs are printed in PETG.

Ultimately, the bed will still be a little lower than I want, but not enough for me to buy 1.5 meter 4040 and then cut it down to size. If I ever change my mind, it’s just changing out a bunch of screws, one corner at a time, and I’ll be set. And it’s tall enough to fit the Q800 refrigerated cooler underneath with room to spare.

Here it is with a tensioning strap I used to hold it together tightly while fastening the middle c-beam: 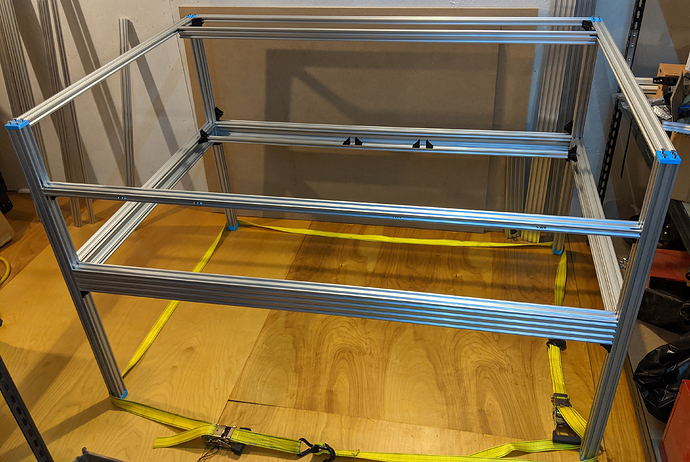 I had the 1.5 meter c-beam sitting around. In retrospect it wasn’t a bad idea to add that stiffness but if I were doing it again from scratch it would make more sense to use 2060 and add stiffness when I bolted a panel underneath.

I’ve realized that if I add 1mm shims on either ends of all the horizontal parts, I can use 1.5 meter extrusion for the lid and front access door, rather than having to cut 2mm off each of them to fit. 1mm (or 0.04 inch) aluminum sheet costs rather more than I would have expected. Maybe I could 3D print a dozen custom shims with plugs to align the with the ends of pieces; that would save cutting 2mm off 5 pieces of aluminum extrusion. Or maybe that’s a silly idea.

So really, pretty much all the rest of the pieces require cutting, and therefore I really need to commit more precisely to dimensions. There’s only one more piece that doesn’t require cutting (assuming I trim the door pieces), but it mounts to pieces that need to be cut, so I’m to the point of needing to decide and commit.

At least one of the 1.5 meter 2040 extrusion pieces came from OpenBuilds with a big ding near the end, and another one came so badly bent that I can’t get a t-nut into the slot. That was a disappointment, since I thought OpenBuilds was considered premium.

The only piece that actually needs v-slot is the 4040, because I’m running wheels in it; everything else could be t-slot. I think that when this prototype helps me nail down the sizes, the next person will be able to upload a cutlist to misumi and might be happier. Don’t know if that would be cheaper though.

The Lasersaur BOM uses Misumi profiles because at misumi you can order each profile in the exact length that you need. You can even have threads on the ends or holes if you need.

Looking good! Are you considering any sheets as siding, or maybe diagonals? This will obviously stiffen the frame even more, making it less prone to vibrations and defacts in the cutline.

and Claudio, we also bought from a dutch shop who cuts and taps as you ordered. Damen CNC, a great supplier for all serious stuff for CNC milling / turning / lasercutting etc.

Are you considering any sheets as siding, or maybe diagonals?

Bingo! This is in fact exactly why I switched back to working on rebuilding the CNC router: to get ready to cut side panels from masonite to which I can bond aluminum sheet. That should make it quite stiff.

Encasing the Monocle without breaking the bank Laser Engravers/Cutters

I’ve looked at the prices for acrylic sheet as case material for the Monocle and my heart shrank. If I’m paying that much for acrylic, I want to be shooting it with a laser to make something useful or beautiful. Heavy-duty aluminum sheet isn’t cheap either. But it needs to be encased to be safe, of course. What can I do? A CO2 laser won’t cut through aluminum even when it’s focused, at least at the power range that could possibly be installed in this machine. It won’t even cut through aluminum…

Rebuilding the CNC router involves drilling a bunch of 2.05mm holes (#46 drill) to tap M2.5 for limit switches and terminal blocks. Managed to break a #1 center drill last night for the first time. Felt silly doing that in aluminum; I was just careless. Left the tip inside, so I had to turn the piece over, re-align, and drill out the hole from the reverse side with a cheap 2mm bit before going back in with the #46 bit and then tapping M2.5 which is basically never fun. I have another 20 of those holes to drill and tap in three more plates before I call it done. I might skip tapping the holes that I’m not sure I’m going to use yet and can get to later if I change my mind, but I’m going to drill them all before I put the plates in place.

That was going really well until I got a bit too comfortable and snapped my M2.5 spiral flute tap. I haven’t been doing enough small work lately and got a little ham-handed. Fortunately, I did this in a hole that is not absolutely critical, and I can drill another hole nearby, but I still feel dumb. And I’ll always have the tip of the tap stuck in my router now as a reminder to take it easy.

Switched to #45 bit for the remaining holes (.03mm wider), discovered that I really wanted that set of holes moved a bit anyway so the broken tap isn’t in the way, and learned about alum for dissolving steel out of aluminum, so I drilled the holes where I really want them and might try my hand at dissolving out the broken tap.

But my new tap doesn’t get here until Monday. Haven’t yet decided whether to risk my straight flute M2.5 tap on the rest of the holes in the mean time. Tapped the remaining holes with a 3-flute straight flute tap. Went carefully, used tap magic, got them all done without disaster.

Decided not to try using alum, because that will delay getting the router functional again, and I have zero need to use the hole that I broke the tap in.

Ordered the aluminum sheet for making the side panels. Should be hear within the week.