Temporary until I got my mount done. Now adding belts and then it's electronics.

Temporary until I got my mount done. Now adding belts and then it’s electronics. 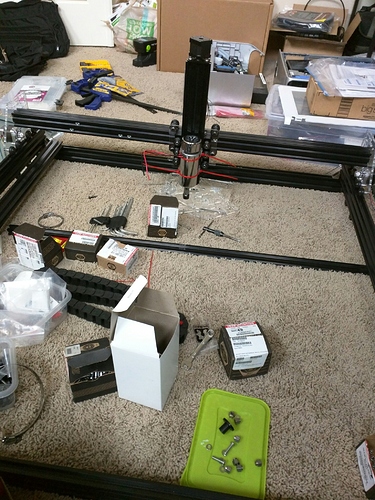 This looks sweet. It feels like the rigidity on this is better than Shapeoko on the Z axis. I still get worried about timing belts not being as good as lead screws, but of course timing belts are 100x easier to deal with.

The OpenBuild z-axis is supposed to be inspired by the Shapeoko one so I don’t think it is more rigid. There is only one threaded block holding the z-axis thread screw to the x axis.

For the OpenBuild one, the size is definitely great. 1000m x 1000m is easily achievable. I think if someone would start submitting z axis that incorporate chinese components, this type of machine can be awesome.

That thing is HUGE brother!

Sorry I missed you on Saturday. We can try after this week. I will need to play with feeds and speeds on that material, but should make for a nice mount!

Deflection? Might need a slightly harder surface to tell…

Really still loving the look of the acrylic plates!

Family happens. I am looking forward to better plates with your help @Brandon_Satterfield ​. My current build is simply a means to an end.