I’ve been playing with a design for a DIY laser cutter, and I’m looking at an idea for a moving bed.

My design uses openbuilds v-slot, and I’m using openbuilds wheels and gantry plates to constrain X and Y movements of the bed. For X, I’m considering suspending the bed from lines wound onto a drum turned by a worm gear. I’ll probably route the lines over v-groove wire pulleys like these:

Spectra / Dyneema (oriented UHMWPE) is stronger by weight and size than steel, and has very low stretch. It seems ideal for this purpose.

Is anyone aware of anyone trying a design like this before? I couldn’t find anything, here on MakerForums or elsewhere, on a suspended bed design.

UWMWPE is chemically polyethylene, which means a low melting point. It occurred to me that as a safety measure, I could design it so that if the bed falls, most likely due to excess heat, not only is it moving the work away from the laser focus, but also it punctures the seal on some safely-retained CO2 cartridges to flood the enclosure with CO2. It’s not a replacement for keeping a fire extinguisher handy, it’s belt-and-suspenders. Does this seem crazy?

Not sure I understand your vision. Would this be for z travel?

Precisely. It would be “hanging from a thread” at each of the four corners, but would be constrained front-to-back and side-to-side by wheels.

Sorry, I’m not quite to pictures of what this would look like; I’ve been fighting Solidworks to get Y and X motion platforms modeled before I add in Z.

Just consider that you cannot have ANY movement of the bed during carriage movement. I would imaging that cables would not provide enough positional stability.
BTW there are lots of bed lift designs out there already checked out … :).

This is the most used adjustable bed design out there. Threaded rods and a belt to move the bed. Even my 3’ by 21/2’ uses it. The picture is just an example and not a suggestion. 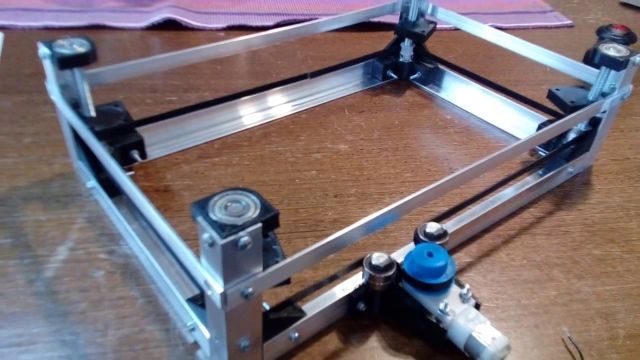 Just consider that you cannot have ANY movement of the bed during carriage movement. I would imaging that cables would not provide enough positional stability.

It’s not dangling; wheels constrain X, Y, and yaw movement completely. The cables constrain the four corners in Z, which means that they constrain Z, pitch, and roll. That should take care of all 6 DOF.

BTW there are lots of bed lift designs out there already checked out … :).

I’m aware of some other designs that already exist:

Note that using screws doesn’t magically constrain X, Y, and yaw; you still should have a form of X/Y/yaw constraint not associated with screws. Lead screws are not linear bearings.

This is the most used adjustable bed design out there. Threaded rods and a belt to move the bed. Even my 3’ by 21/2’ uses it.

To use belts, I would have to stack up pulleys and sync three or four belts; one belt around each side syncing the two screws on that side, and then one or two belts around the back screw on each side to a single Z motor.

I’m not going to use 2 or 4 motors on multiple stepper controllers; besides the reason above, one driver goes bad and you rack the bed and/or the screws and it’s never the same.

I know that four points is technically overconstrained for a plane, but it’s a compensation for the large bed here, and I’m not idiologically committed to an exact constraint design.

And part of the joy of this for me is to come up with something new and try it out. I am using the space below the laser for all the electronics, except that I’ll create a “wart” off the side for the display/controls. I’m going edge-to-edge with the gantry internally.

Oh, yeah, control electronics in the wart up front, for sure!

Last night I got closer to a design that I could capture images of to make this clearer.

This shows a randomly-colored frame with the basics of the design, looking from slightly to the rear of the right side of the unit, since that gives the best view of the belt paths, I think. 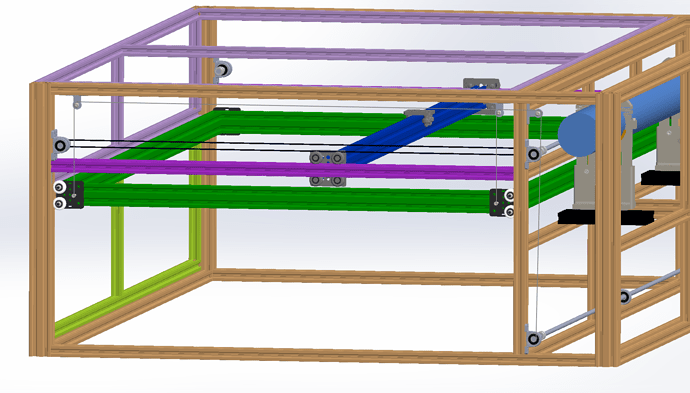 The black belt from front to back, the Y belt, is intended to be an open belt that is clamped in a belt block to the gantry plate at the end of the (dark blue) X gantry beam.

The thin gray lines from the gantry plates on the (green) bed frame go over pulleys hanging from the top of the frame, then over a pulley in the back, and down to a rod that here is modeled at the very bottom but is likely to be right below the laser shelf instead; I’m still playing with that. Those lines are intended to be 100lb test spectra. The bed is attached to four gantry plates, one at each corner, each of which has two wheels which ride in v-slots in the frame. Really for exact constraint it should be just one wheel at each corner. I don’t have a good reason for two beyond redundancy and ease of assembly (it will be easier to line the gantry plate up in the bed slots this way, I think). The lines will go through holes drilled in the (fuschia) Y rails, but those are 2060 and the lines won’t interfere with the wheels on the gantry plates for the X (dark blue) gantry.

I haven’t modeled running the X axis just yet; I’m still deciding whether to use the gantry plate or just buy a 1500mm chiwin rail. Robotdigg has 1500mm MGN20 for $90. But I have the gantry plate already, so I might start there. I might end up mounting it underneath so that I can run drag chain right on top of the gantry for carrying air assist.

The blue cylinder is a bounding cylinder around the 80mm laser tube.

The torsion rods are 8mm, run through four KP08 self-aligning bearing blocks. They aren’t really 1500mm long; they are really two rods joined with diaphragm couplers that I didn’t model. But with the four bearings spread out, I don’t forsee any problems with the torsion rods whipping; neither is going to turn fast.

I haven’t modeled any of the electronics, drag chain, or optics components. I have set bounds in the model to match the dimensions of the laser optics set I think I want to use, but for which I don’t have a model right now. There’s enough room that the optics set dimensions aren’t critical.

The model is terrible. I’ll share the solidworks 2019 files with anyone who seriously wants to play with this design, but ultimately if I make this my current plan is to convince myself that it will all fit together, order all the parts, and then re-do the model from scratch with a better understanding of how it will all fit together in the end.

One thing to consider is pully placement if you are going to have a pass through. Also specs for sizing cables for maximum weight bearing.

I’m not intending passing through the back, but the lime green in front is a lower door intended for pass-in. The belts are entirely out of the way of that, on purpose. I’m hoping that having a large cutting area reduces utility of pass-through. I’m trading that off for cutting width. There will be a wall behind it anyway.

The four suspension cords I have in mind are 100lb test braided spectra fishing line, and I could easily double them for a total of 800lb test. 3/32" / ~2.5mm polyester sheath spectra leech line has a safe working load of 380 lbs / 170 kg (nearly a ton ultimate tensile strength). Similar for unsheathed 7/64" braided spectra (e.g. amsteel), but braided has a little more stretch, and the stretch increases a bit with diameter. So not much stretch in braided fishing line, but it might be meaningful in the 7/64" which would probably be gross overkill. With the 5mm v-groove pulleys I don’t think I want to use 2.5mm line because it might bind in the pulleys that have to take two lines.

Even if I mount a rotary axis on the bed, it’s not going to be remotely heavy enough to matter.

I mirrored parts to the left side and added X hardware. I haven’t worried about belt clamps; that’s trivial to print or mill from aluminum.

I was going to show a more conventional view, but it turns out that the right rear quartering view shows the belts and rods better than, say the typical trimetric view. So here it goes again: 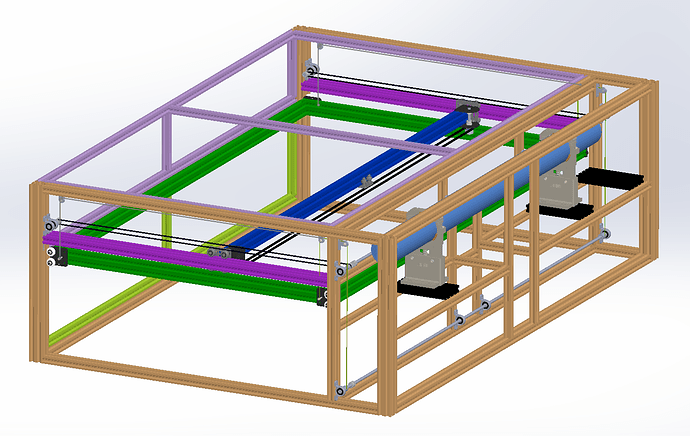 No banana for scale, but inside the 4040 corner columns are 1 meter pieces front-to-back and 1.5 meter pieces side-to-side, so lots of room for a true 80W tube.

I can make a STEP if anyone wants to look around in the model; let me know.

Yesterday, I started milling brackets for the v-groove bearings from 6061 aluminum, and made a small mistake. Reviewing the partially-completed work, I decided to change the design of the brackets to improve design for manufacture. In changing the design, I realized that the new design might work in plastic, so I made further changes to make it print better.

Last night, I printed a few test articles in PETG, with the idea that I could test strength, and at worst would have a model to keep handy to help avoid stupid mistakes while milling the new design in aluminum. This morning, I set up a test article to check strength. I maxed out my hang scale at 110 lbs / 53.75 kg without any obvious deformation or noises. In fact, I hope I didn’t damage the scale because I think I momentarily hung all 160 lbs of me. I damaged screw threads on the screw I was using for the axle but the plastic bracket was completely undamaged. So I think I have a successful design in plastic.

The cheapest vgroove bearings are 3mm bore or 8mm bore. I don’t really want to hang a 1475mm x 850mm bed from 4 3mm bolts, but 8mm feels like overkill. Yet $3/each is the lowest price I have found for 5mm bore, 22mm diameter, 5mm thick v-groove bearings, in 5 packs when I need 6 so of course I have to buy two, and it’s still cheaper than any other source of 5x22x5 v-groove bearings I have found.

I found that they are 625ZZ 5x16x5mm bearings with a 3mm larger outside radius with a v-groove cut in it. This gave me the idea that 605ZZ 5x14x5 bearings are a cheaply-available common size, so I could make v-groove sleeves for 605ZZ bearings on the lathe. (Mark Rehorst said that using spectra on printed idlers on his sand table damaged printed pulleys, I think.)

Or I could spend the extra $22 on just buy the right pulleys and have 4 left over.

They aren’t high-quality pulleys, but I’m not going to run them fast or far, so I don’t care if they make a little noise.