So when I download svg’s for laser cutting, a lot are setup with multi colored lines for cutting/engraving. Is there a way to use them as is in laserweb? Does it know the difference? Screen capture for a picture says a 1000 words. 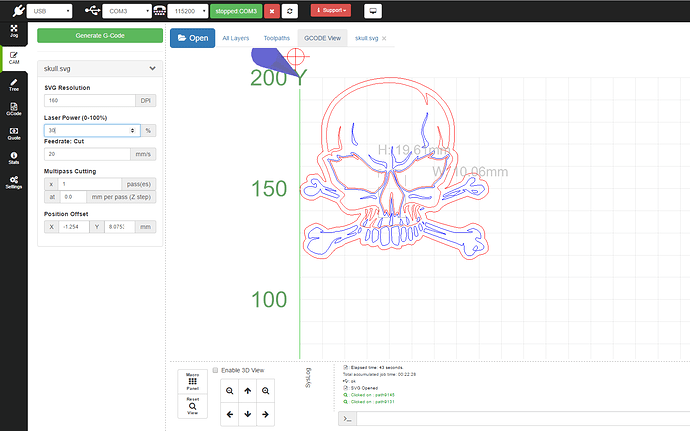 I think @Todd_Fleming is currently working on color identification. Take a look through some of the other posts here as it was recent he mentioned it I think

@Sebastien_Mischler is working on redoing the SVG parser for LaserWeb3. Not sure how far along he is with it yet, but it will do exactly what you want from what I have gathered.

Ahh, I new someone was. Todd has been posting so many changes lately I just took an educated guess that he was the one I saw post it

Alright, thanks for the information. That would make things amazing. Currently trying to set a job up and it gets frustrating as the files do not come in layers.

Currently, what you can do is save each color or layer as a seperate SVG and then open each one in LaserWeb in the order you want them to be processed (ie. engrave first, then cut etc.) set, each svgs settings for feedrate and power etc. then generate the Gcode and send it to the laser. The wiki has an example of how to do this https://github.com/LaserWeb/LaserWeb3/wiki/Workflow:-Setting-up-a-multi-step-job

We had that in LW1, at that time i could not use it much as i only had a diode. I really like this feature

Thank you @funinthefalls However, I was referring to downloadable content that is pre setup for some laser cutters based on color selection.

You can still seperate the file yourself, just select all the objects of one color, copy, and paste into a new file. Using the skull as an example, open it in Inkscape, select all the blue lines, choose copy, then paste them into a blank svg file and save it as blue.svg. Then repeat with the red and so on. 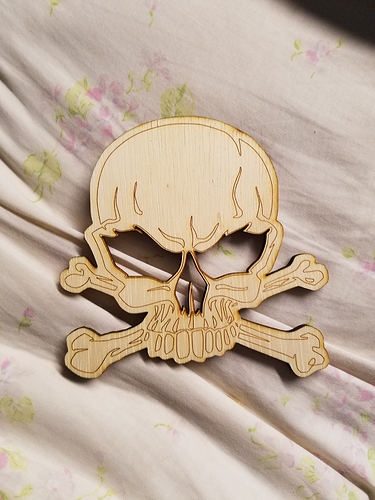 A tip for those jobs that have a raster engrave and a vector engrave / cut: place a tiny dot, or other object in the 0,0 position in each layer. This way the layers will line up easily when opened individually in LaserWeb.