So, it turns out the stuff I got yesterday (Liqui Moly) is no good

So, it turns out the stuff I got yesterday (Liqui Moly) is no good for the stainless marking. Even after leaving it overnight, it was still dripping wet. So I think @Scott_Marshall is correct that it is never meant to dry.

Today I purchased some Minehan Circle Spray. According to the MSDS, it has 40-60% MoS2 (Molybdenum Disulphide). This is much higher than the CRC Dry Moly & Quick Dry Moly sprays (they’re both <10%).

So this stuff cost me AU$23 odd. It is used for industrial purposes in general & there is a supplier of it semi-local (about 1/2 hour away).

Did some tests today with the new stuff & it works wonders. Also, cleanup is a breeze. Just used water & a nail-brush to scrub it off, with minimal effort. Closer to the text, I used the Dremel for about 10 seconds with a brush attachment to just get the last bit off that didn’t want to come off with the nail-brush. I used my vector engrave method, which is not really suitable for this, as it leaves gaps between each rectangle. Either that, or I need to decrease the spacing between rectangles.

Also, as a last test for today, I tried on a small piece of Aluminium plate. I sprayed the stuff on, hit it with the heatgun (couple of seconds to dry then) & then I lasered it. It didn’t bond, however if you look closely at the picture (last one) you can see some squiggly lines in the centre region where it did mark it, albeit super faint. So I imagine with either more power or more passes or slower speed (I used 20mm/s) it just might mark permanently & darker. That’s a test for another day. 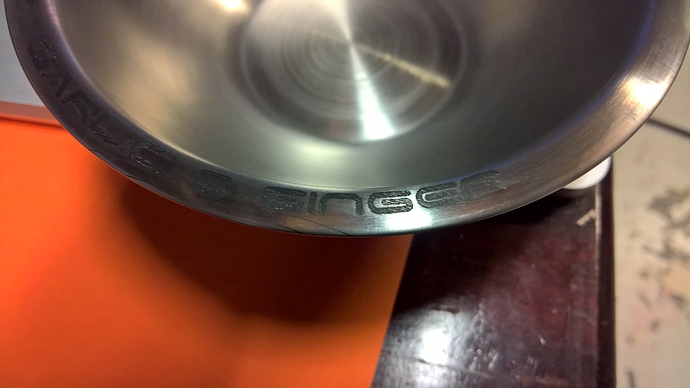 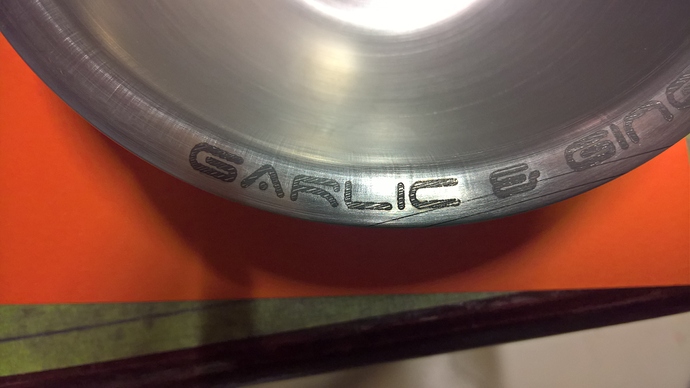 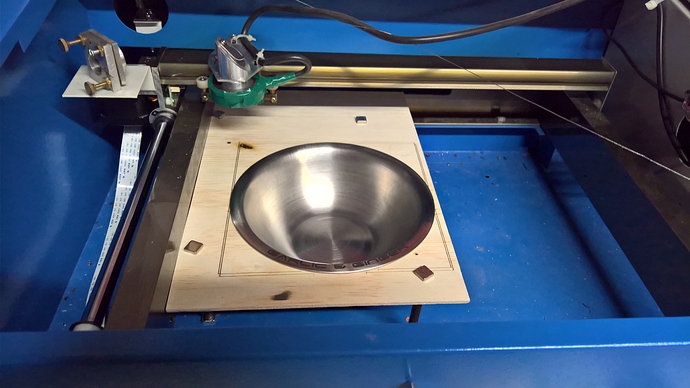 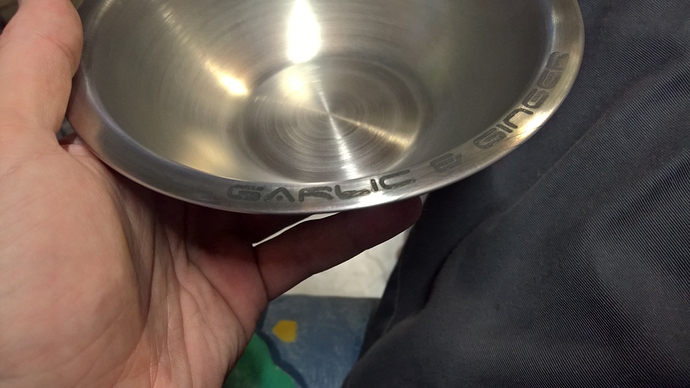 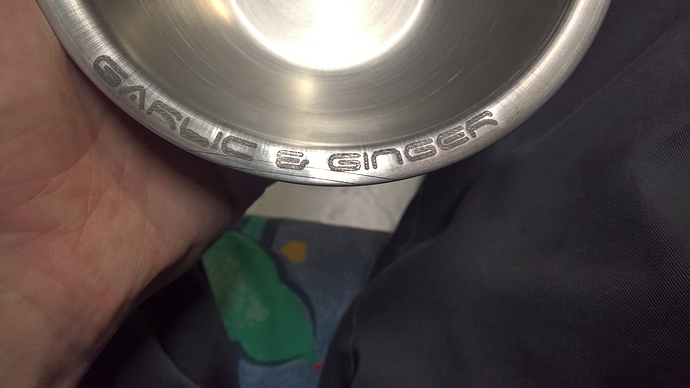 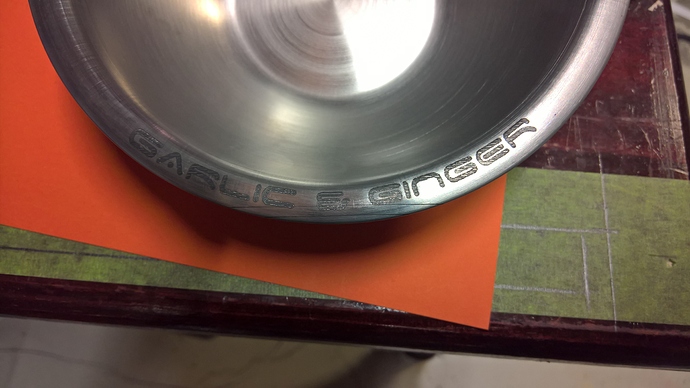 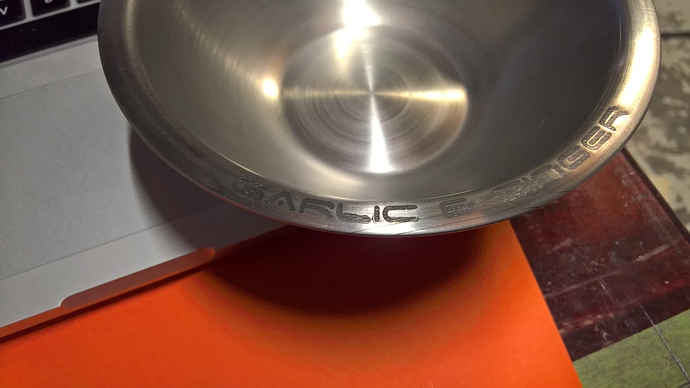 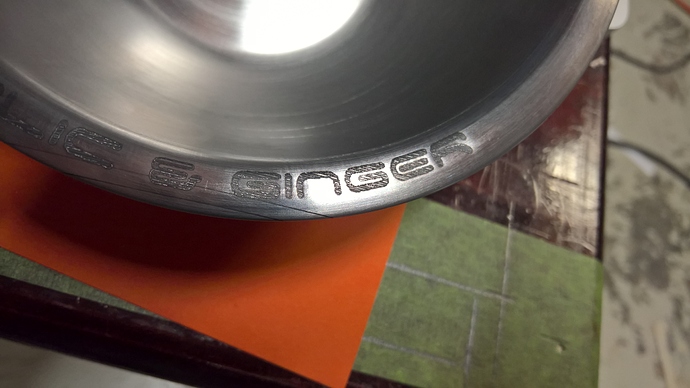 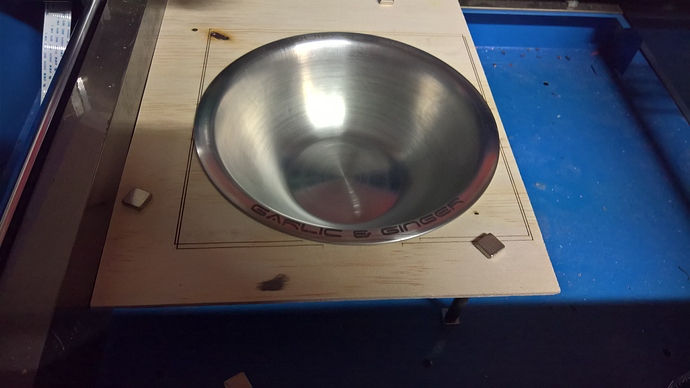 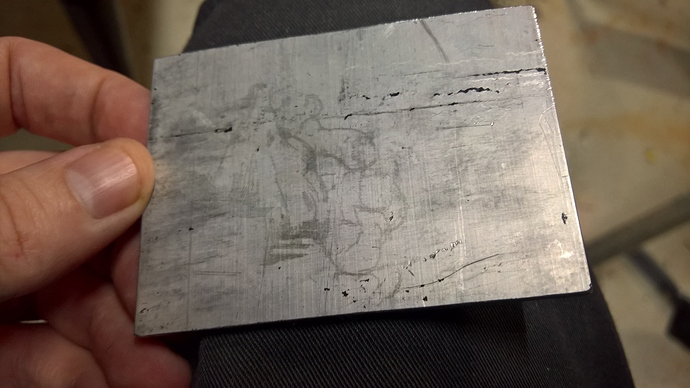 @Alex_Krause That’s an interesting concept. Might work. Could maybe test by aiming the heatgun at the aluminium while lasering it. I’ll do a test later sometime with the speed at say 1mm/s just to see what happens. Not practical, but it will show if it is possible to bond with more heat in the spot.

love the cutting table-what shop did you buy this stuff from?

@Phillip_Conroy1 Haha, my cutting table was just a dodgy setup to try get the bowl at the right height.

I got the Circle Spray from the Stapylton store of http://www.minehanagencies.com.au/lubricants.html#circlespray

They have a few stores, but all located in QLD.
Townsville, Stapylton, Airlie Beach, Mt Isa. Fortunately for me Stapylton is reasonably close.

I’ve also tried with some graphyte/MOS2 grease bought from local manufacturer, with no effect whatsoever, so I guess either teh MoS2 content is too low, or there are other factors, too. Not even a slightest imprint on stainless steel…
So I’ve ordered a spray on Ebay, will try and report if it works, if it does, this may me useful for people in Europe, where CRC shipping costs may be too high…
http://www.ebay.com/itm/131718003118

@Mishko_Mishko I’m curious what sort of settings you used when you tested the graphite/mos2 grease that didn’t work? I’ve been using around 10mA @ 20mm/s.

I don’t remember exact speed, but I think I didn’t go lower than 50mm/s. And I did crank it up all the way to 25mA in the end. Not getting even a scratch, I gave up quickly, I may try some more, as it’s really a shame, this costs next to nothing, 400 ml is around € 3,00,and if if did work, I’d simply apply it via some kind of stencil, to get even thickness, and remove it with a spatula after engraving. This way it would last a couple of lifetimes of intense engraving LOL.
Pure MoS2 is available on ebay as a powder, but the guy selling it doesn’t ship where I live. The idea is to encapsulate it in the sufficient concentration in whatever carrier would make it easiest to apply, but some sort of grease sounds as the way to go to me. Vaseline and similar stuff would work too I guess. If MoS2 is the sole component which makes engraving possible, which I have still to find out. Could take some time haha…

@Mishko_Mishko I believe MoS2 is the only thing that is necessary, because the stuff I got is only MoS2, Butane & Isopropanol. I am fairly certain the butane & iso are just for aerosol capability & carrier. I’d test that graphite stuff you have again at much lower speeds, try like 10mm/s. If it marks, then bonus due to the cheap cost.

@Allready_Gone Sounds like me. Once I learn a new trick for a material, nothing is safe anymore haha.

@George_Canfield Could be the case, but the aluminium plate I used is not really reflective. It is quite matte finish. But, what I see with my eyes may not necessarily be the case with a laser beam bouncing off it.

@George_Canfield I think it is used as a cutting bed due to lack of reflectivity in general. But I may remember incorrectly. I’m still a noob myself too.

For CO2 lasers with sufficient power to cut metal, aluminum is harder to cut than say C-Mn steel ot stainless steel, as it is more reflective, the molten pool even more so, and in rare cases it can reflect back throught the optics and even damage the laser. Copper is even more problematic in the same way, being an almost ideal mirror for this wavelength. But I don’t think any of that would apply to the small power laser like K40, no chance of melting, or even scratching metal…

@Mishko_Mishko Ah, so I had it backwards & aluminium is more reflective. Thanks for the extra input Mishko.

Yes, but I think that’s only significant when it’s molten, otherwise I doubt that has any effect with small power lasers. Also depends on th ealloy, for example the laser i worked on cut ALMg3 without problems, but wouldn’t even scratch Al2SiO3 , just a ton of sparks…

@Mishko_Mishko Ah, seems there is a lot to it. That’s interesting to know that different alloys of the same base metal will react differently.

Do you think this will work to mark metal?https://www.rocol.com/products/dry-molybdenum-sulphide-aerosol-spray
Contains more than 70% molybdenum disulphide
/Peter

@Peter_Jacobsen Most people are using only about 8% MoS2 with decent results. Check some of @Scott_Thorne 's previous efforts with it. If I recall correct he was using a CRC Dry Moly lube (correct me if I’m wrong Scott). Make sure whatever you’re going to use is “dry” moly. The liquid moly definitely does not work. I can’t say for certain, but I have a feeling that the product you linked will work equally as well as what I used. What I used was about 80% (or 88%) if I recall correct.