So I couldn’t help myself and I tore apart a perfectly working Eustathios to install a modified carriage that has mounts for a 40mm fan to quiet it down a bit. Of course, now I’m struggling to get it back to its former glory. The carriage movement isn’t quite as smooth, but not binding terribly.

In any event, circles are slightly out of round, and they’re fairly consistently out of round with a flat spot on the left and a bulge in the top right.

Below is a picture, but it will be hard to notice the issues. When printing figures or more organic shapes, this isn’t noticeable, but when printing circles, it becomes more obvious.

Here is a quick rundown of where my head is at right now, but if anyone has any “ah hah” moments, I’d love the help. 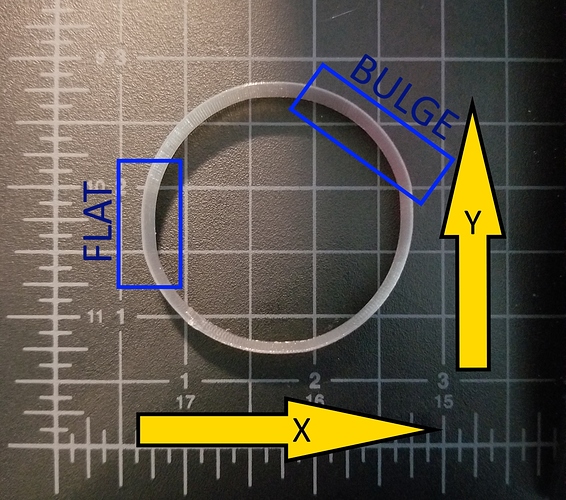 As you have noticed… The main culprit is your X-axis movement. The flat spot you are seeing is most likely because the coefficient of static friction is higher than the coefficient of kinetic friction between bronze and steel. This will be exacerbated by and misalignment in the system causing a side load on the bronze bushings. Essentially while its moving friction is low. But as the x axis reaches zero velocity (like is does at the apex along the left side of your circle) a friction force spike is imparted into the carriages motion. This causes a lag in the movement at the apex until it breaks through the static friction to head in the other direction. All I can say is align, break-in, test, align, break-in, test… Rinse repeat. It is the worst part of the build on cross-rod gantry printers. These large printers with tight tolerances, and parts needing to align with so many degrees of freedom… Well as you know it’s a pain.

But like I always tell people: keep at it. When it’s right… You will know. I know it sucks to feel like you moved backwards after the carriage change. But give it time. You will get there.

Another thing to check is belt tension. You can see similar issues on circles if you have an elastic system (i.e. backlash in the belts at an axis direction change).

Good point on the coefficient of friction on the apex/axis direction changes. I hadn’t thought of that. That makes much more sense that it exhibits the same behavior, regardless of how the part is oriented or where it so on the bed.

Belts seem good from a tension standpoint. I’m not noticing any backlash.

I’ve been running the break-in code at 150mm/s for the past hour. I’ll probably let it go for another hour, then run through the alignment process and use that opportunity to recheck for square on the faces just to be sure I haven’t torqued it in any direction after several iterations of loosening/tightening everything. My OCD is kicking in not having the motor belt guards on anyway

I’ll rinse and repeat a few times as necessary. Thanks!

Did you by change flip-flop the bearings or the rods? From other life experiences, even flipping them end for end, as they were part of a previously mated system could give you fits. I would not change them after are redoing the break-in. I would in the future mark them as best i could with carbide scribe on the ends and keep track of the bearings.

Brad- any progress on this? Curious how it worked out for you.

I did run the break-in code for a while, went back, loosened the lower rail mounts, and let it find where it wants to be, but I haven’t had a chance to test the progress. It feels a little better,but still not where it needs to be. I won’t get to work on it until this weekend.

BTW, good suggestion on marking the positions of each rail when you get it dialed in. I’m fact, I may swap them around and retry things if I can’t get it where I want it.

Sorry for the necro-post, but I wanted to get back to you @Dennis_P . I think my issue may have been that I squeezed the outer rods in a bit when tightening down the screw and captured nut that holds the gantry rods in the belt tensioners.

Either way, I swapped the gantry rods, ran the break-in code for 1.5 hours, and it’s much, much better.

Circles seem circular. I printed a nickel test fit at 75mm/s and at 40mm/s. Both came out well. Obligatory #benchy looked fine (steam stack at the top is nice and round).

Back in business. It seems like you’re making good progress as well. Best of luck!

@Brad_Vaughan thanks for the follow-up. I was hoping you had gotten everything figured out.

@Brad_Vaughan i am trying to sort out my own alignment and break in issues. Would you be willing to run the break-in cycle scripts I posted in the other thread?