Side question for you all regarding Arduino boosting data signal.

Side question for you all regarding Arduino boosting data signal.
I am so tired of having my NodeMcu data cable short to my neopixel.
Does any one know what is a good signal booster so I can get maybe 10 feet between the ESP8266 and the first WS2812B if possible?
Every time i try to go farther then say 12 inches, the signal get s

Have you tried using a CAT5 cable? 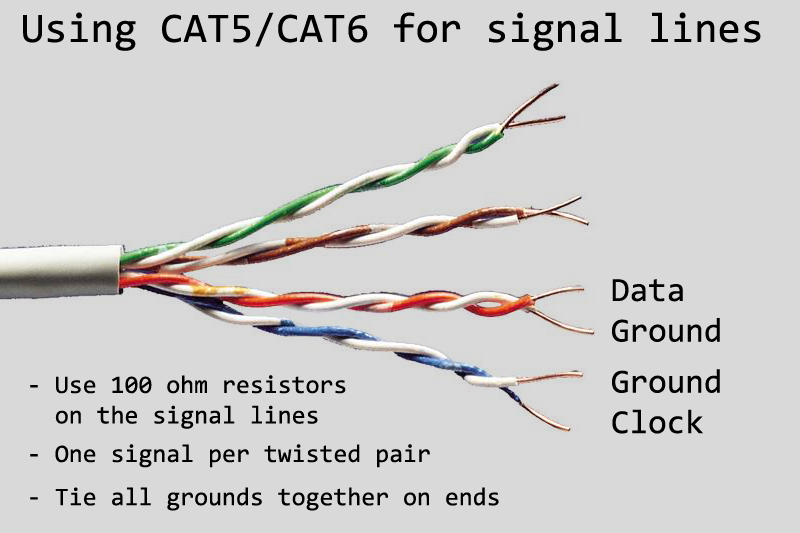 Yes Paul uses rs485 chips. You can actually get hundreds of feet with it. If you don’t use rs485 (Paul’s extenders) then the key is making sure you stay close or at 5v logic. I use a level shifter in my setup and I can get at least 30ft

@Chris_Rees brings up a good point. The LED strips are ideally expecting a 5V signal. For best results make sure that is what is being feed into the strip.

@marmil ​ you can buy ready assembled RS485 modules from the usual places for less than the price of one osh park PCB. They work great over hundreds of feet using 3 core .75mm mains cable (which is available in rubber sleeve). A 3 pin waterproof XLR connection on the end and jobs a goodun.

If you buy cheap RS485 modules, pay careful attention to the termination resistors. Even wrong, things will work well over short distances, but correct impedance matching gives you far better performance over much longer distance.

For rs485, shouldn’t the resistors always be 120ohm? Or can performance be gained drone measurement/changing resistor values?
Thanks.

Resistor values to the pixel?

Check this post out for resistor values. It’s a great read and should give you some ways to decide what to use

for long cable runs, its not simply resistance (voltage drop), but a capacitive and inductive effect along the run that has to be taken into account.
These are more pronounced at different frequencies. That length of cable can act just like a filter.

I mean the termination resistors for rs485 ps is talking about.

@Chris_Rees Thats a good read thanks.

That’s indeed a great thread, and I’ve been struggling with a similar topic, which is how to get long jumper cables in the middle of a run. I tested a coil of 100’ of Cat5e cable at home and it worked perfectly. Then I used the same cable for ~42’ of jumper at an installation and it didn’t work at all! Really frustrating. But maybe it comes down to needing the right sized resistor at the receiving end. And maybe I need to splurge on a scope.

@Ryan_Cush I just ordered a DSO112A which hopefully will be ok for this purpose.

Hey that looks pretty cool (and affordable), @Gibbedy_G ! I was just looking at a couple of slightly more expensive models. The first one would double as a multimeter. (Though maybe the others do too?)

@Ryan_Cush I like the sound of dso203.
I think I have seen a tear down of that meter scope and it wasn’t good.

Not sure if it’s a rebadge of this but this guys videos are good value anyway:

He talks about the one I ordered in this video. Ordered it a week ago actually.