Confession time. I never bought a tap follower, even though a Brown & Sharpe reversible tap follower is only $19.

I have previously just put a pointy object (made from a broken drill bit) into the quill and used quill pressure instead, which is hard when hand-tapping. It was clearly time for a proper spring-loaded tap follower. But instead of spending a reasonable $19 on a high quality tool, I spent a few hours in the shop.

I looked at my stock pile, and was sad that I didn’t have any quality ¼" round stock, just hot rolled junk. But I had cold-rolled ⅜" and ½" stock, so I figured I’d use that. I found a 5.55mm x 38.1mm spring with 25mm of compression in an assortment I bought a few years ago; 200 assorted springs when I needed 3, of course, because 200 was way cheaper than 3.

I went with imperial diameters because my over/under reamer set is imperial. But of course I did lengths in metric because I’m angry about imperial.

I started freehanding the pin. I decided on a 5/16" pin diameter, put the tip on, and then put 50 mm of 5/16" shaft, 5mm long ⅜" collar, parted off, and then stopped in a panic, unsure whether the design in my head would work.

I used FreeCAD and the Assembly4 workbench to try out my idea.

At first I had thought I would just put a set screw in the back to hold the screw in place, but I finally realized that there wasn’t a particularly obvious thread that I could cut into a ⅜" hole without single-pointing both sides, and I didn’t feel like it. I also realized that the narrow 5.55mm spring would buckle in a ⅜" tube, so I decided to make a 4mm shaft for it to run on and drill a 4.5mm hole in the back of the follower pin for the shaft to run into. I realized that if I just knurled and pressed ⅜" into the ⅜" reamed hole, I’d have a tight fit and a relatively permanent tool.

Back down to the shop!

The 4mm shaft 40mm long was a pain. I should have taken it all in one pass, and I didn’t, so I had to take many fine passes and finish up with file and emery paper. Serves me right for ignoring what I knew. Got it right in the end. Knurled 10mm, and parted it off.

Decided to blue the pin and the shaft to protect against corrosion and hold oil, and also to blue the inside of the body for the same reason. Sadly, I didn’t clean my fingers as well as I thought I had when I picked up the body, so one side of the body is a bit uglier than the other:

I put the pin in, put the spring on the shaft, pressed the plug into the back, then faced it off to try to blend the back end together. I could have knurled it deeper and/or used loctite, because when I faced off the back to try to blend it together, the plug moved slightly, breaking the illusion. Oh well. I should really have reduced the follower head diameter a thou or so and reamed the body undersize for a solid press fit for the plug.

If I were doing this again, I would also consider a thinner follower pin so that the spring fits in the body without support in the middle of it, allowing me to use a standard size of set screw in the back. That would also let me have two pins, one with a male taper for very small taps. I should probably find some ¼" drill rod on ebay one of these days.

I thought that the ½" body was rather stout, and that perhaps I should have gone with ⅜" for the body as well as thinner follower, but I then found that the B&S follower also uses a ½" body. So maybe serendipity there?

I’ve made a few design changes since based on what I’ve learned. In particular, turning the head of the follower undersize means reaming the shaft undersize and not having to knurl the plug for a press fit. Here’s the current drawing, such as it is…

Animation with these changes:

A little Mother’s polish cleaned the blueing smudge off the body, and it looks great. No trace of discoloration after a few seconds of polishing: 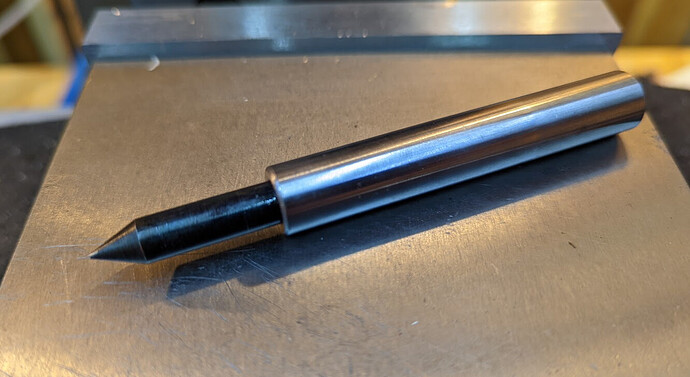 Mounted in the mill: 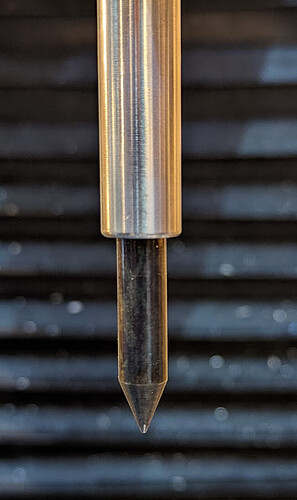 Of course, now I realize that most of the taps I use have points not holes, so I really need to make the pair to this one with a smaller shaft and a hollow point for those small taps. Probably 90% of my tapping is M5, and half of what remains is M3 or (rarely) M4. I just got some smaller drill rod in… 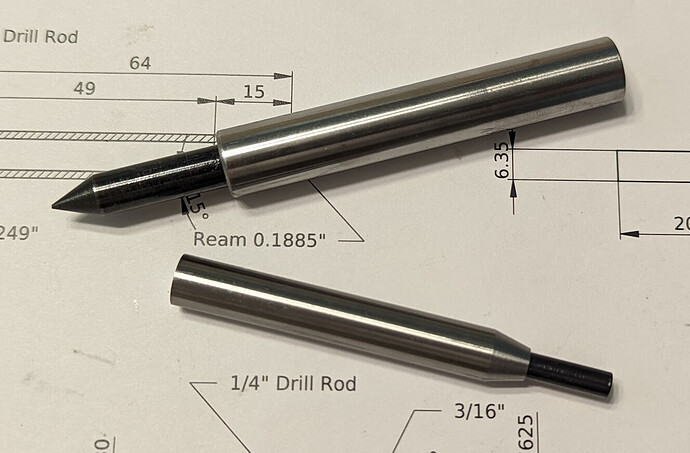 I had two challenges making the smaller tap follower.

This time I didn’t get any of the Oxpho Blue near the follower body, just the tip. The black surface of the plug is the untouched surface from the ¼" 1144 as shipped.

It’s smoother and tighter than the larger tap. I’m very pleased with the action. Now I need to make something that needs to be tapped again!

I used a #1 center drill for the tip of the follower, and it seems to work fine. 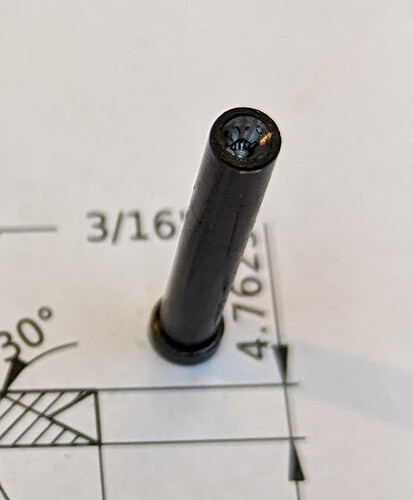 Here are the parts laid out ready to assemble: 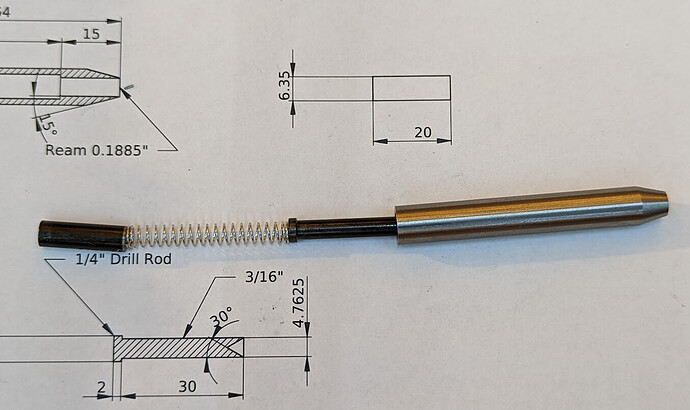 Close-up of the business end of the assembled tap (complete with tiny chips I didn’t notice and remove until after I had taken the picture): 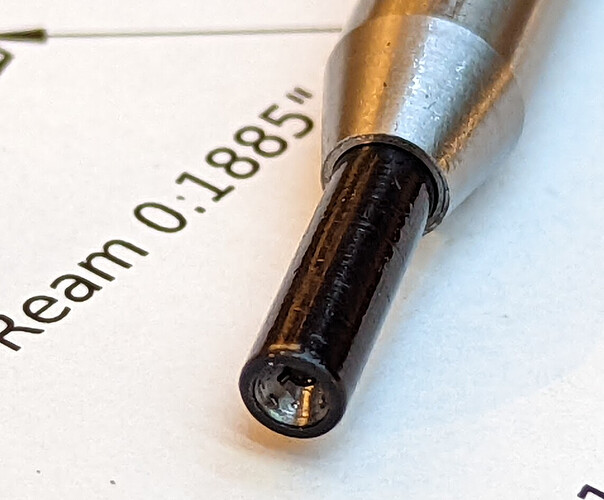 I’ve thought of turning these designs into a parametric design, but I think I’d rather go on to making something else instead for now.