My laser seems to have lost power overnight. I do watch my temps closely and normally don’t run over 20C.

I engrave hardwood blocks and have done several hundred in the past months. The last batch was fine, this batch not so much. I noticed the engraving depth was very poor so I cleaned the mirrors and lens. I also increased the power with no noticeable improvement.

I do notice the laser beam in the tube seems to be bending at the very end where it would exit, is this normal? Also if I do a 1-2 second test fire the beam is jumping all around and arcing. Is that normal?

I already bought another laser because I need to have one up at all times for my business but I want to try and diagnose this issue. Also the new laser isn’t as nice as my original.

Thanks in advance! PS, when I cleaned the lens I was surprised to see the outside edge was chipped. Just the very edge where I guess it seats when the cone is screwed in. I guess it’s possible this happened between jobs and could be the cause? But again the test fires seem pretty strong even with that issue.

Do you have a ma meter installed?
What is your tube current doing?

I do have a meter but I have no idea what to check or where. The tube has a purple light beam in it when test fired but it seems to be bending right at the very end, not sure if this is normal. It’s also jumping around and arcing inside if I hold the test fire button down.

The purple dancing beam may not indicate a problem.
The meter I am talking about is a laser current meter which came on the machine or was installed as an upgrade. This meter is in series with the lasers cathode and measures its current.
Post a picture of your control panel.

Have you performed a realignment?
Are you sure the lense is not cracked? 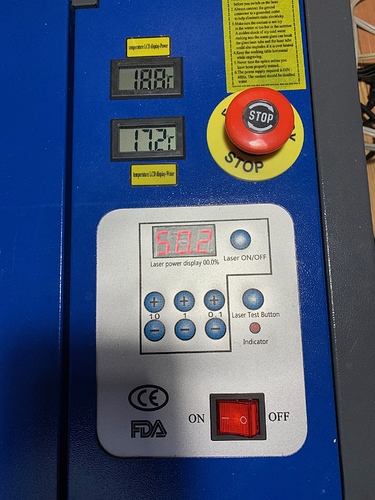 I checked the beam alignment at the last mirror and the beam was very close to center of the hole so I assumed that meant the others were close. I also took the lens out of the new K40 and tried it with no improvement.

I have another issue with the new laser, I may have to do a post about that. The ribbon going to the controller for the X and Y axis was laying in the bed when I opened the box…ughh.

There are many things that can cause a loss of power.

Optics, LPS, Tube, controller (in order of most frequent)

We will have to check them in sequence, optics first

To do this tape a target on the surface under the objective lens.

As the target gets further away the subsequent dots should not vary from the position of the first dot.

Objective not at the proper distance from objective lens

Thanks for all the information Don! I will be able to check these things later in the week when I get home from work travel.

Hey Don, I have not been able to look at this laser because I was working on the new one I got that had it’s own issues. But after reading some other posts I was wondering if my issue could be a bad mirror? It seems that in checking alignment with tape you could still get a nice burn on the tape at all points even with a poor mirror, and then when you go to do some actual engraving the poor mirror would not reflect the beam well enough to mark the wood. My laser went from good to weak to real weak rapidly, I wonder if a mirror could have failed? Note: I am on the road for a few days so maybe I should just order new mirrors, seems like they would be good to have since I have two K40’s now.

Its possible that it could be a mirror but when you look closely at the mirror you should see what is causing it. If the mirror is not reflecting the beam then it is absorbing it therefore you should see some evidence of damage.

Having spare mirrors is a good thing.

It hard to tell what your K40’s laser power is doing when there is no MA meter. This is why we recommend installing one. They all used to come with them.
We can also put a DVM in series with the cathode and measure it that way.