I came across someone who is funding a new cnc machine via kickstarter. OK, lots of these, but his machine looks like something suitable for the home workshop. The Samurai 120 CNC 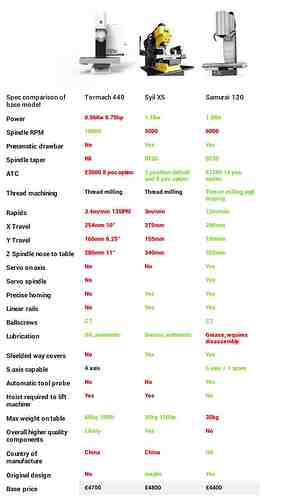 It’s tempting to invest, it could be great. I’m sure on here you have all seen lots of these startups.

A concern is that he lists “No” for “linear rail” for the Tormach in red. It would have been more sensible to list “Ways” on the left, and then in black instead of red/green listed “prismatic” and “linear rail” as appropriate.

Prismatic ways are strong, rigid, and capable of high precision. Linear rail has so much less contact area; a few tiny points along a few tiny bearings. I’d be happy using linear rail if I were mostly cutting aluminum, I think. But I think that the rigidity of prismatic ways is a benefit, not a fault. I would also expect prismatic ways to last longer. But then the Tormach has a faster spindle which you might reasonably want for cutting aluminum. Why use a slower spindle when going to lower-rigidity ways?

Agree, the prismatic cast iron ways on my manual machine are superb. They are super stiff and you probably get some damping with the sliding oiled joint.

I don’t know whether the oil damps vibration, but cast iron itself does.