My wife teaches math, and one of the tools she uses is the game of Set. However, our copy fell and the ABS box broke, but the lid survived. I designed a replacement box to interface with the original lid. I don’t know how consistent the game has been over time, so I don’t know whether this would work for others.

My replacement is made with FreeCAD LinkStage3 with the save-to-directory feature. The SetBox.FCstd file may work with upstream FreeCAD but the SetBox directory is the canonical location. I printed it in PETG because it should be tough enough if the set gets dropped again. 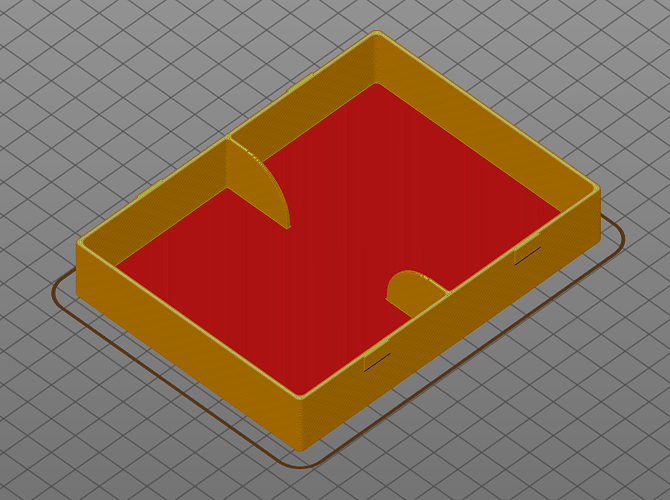 What printer do you have?
I use an Ender3, fully modified. It prints pretty smooth.
Is that kind of like an UNO card tray? Where the pull stack goes face down and the discard
stack goes face up?

I have two. One that I designed myself using the frame from a Tronxy X5S that was a piece of junk as delivered, and one SK-Tank that is really good except for the bed not being as flat as I wanted.

I’m slowly building a rather different printer on top of the skeleton of my Tronxy X5S. Previously I replaced the Z mechanism with a single motor and continuous belt driving synchronized single-start 2mm lead threaded rod, and milled alignment jigs to mount linear rail to the top of the Y axis and front of the X axis extrusion. Today I finished milling a set of gantry mounting plates out of 1/4" (6.35mm) aluminum plate to attach the X gantry extrusion to the Y linear trucks. My prototypes last …

@GeoffS’s New printer - corexy or not? post was so good, I’d like to do it again, but differently. I gave up on my Cantilever printer design based on leftovers and have decided that I’d like to buy a printer that someone else designed. I’m sure I’ll start modifying it soon, but I want to start from a tested design. I want to spend my design energy elsewhere right now. (If I get another working printer, I can afford to try out new experiments on my existing self-designed corexy, which is current…

I don’t know if it’s like an UNO card tray or if it would fit. It needs to hold 81 cards, which I think are the size of normal playing cards but I haven’t checked that. It was intended only for storage, not for game play.

Set (stylized as SET) is a real-time card game designed by Marsha Falco in 1974 and published by Set Enterprises in 1991. The deck consists of 81 unique cards that vary in four features across three possibilities for each kind of feature: number of shapes (one, two, or three), shape (diamond, squiggle, oval), shading (solid, striped, or open), and color (red, green, or purple). Each possible combination of features (e.g. a card with three striped green diamonds) appears as a card precisely onc In...

My Ender3 had a crown to it, I took a piece of 3/16 annealed glass and clipped it to the bed, then I put a Mag-plate on that with a Mag build plate. It’s as flat as a rule.