Things are progressing nicely (but slowly) with my outdoor house light installation. As each strip is added I run a quick test that goes from red to green to blue to white. One of the strips started flashing random colors as the white cycle started.

Everyone here is so helpful, but I think I’ve been taking far more than I’ve been giving so I decided to try and figure this one out “on my own”.

Since I had everything running with the actual hardware and wires inside my home before the installation started, I assumed I wrecked a connection somewhere while pulling wires. Spent about a week and a half opening up shrink tube and electrical tape to check connections. Everything seemed fine.

Then I wondered if I messed up or forgot a ground connection when running my signal wires in twisted pairs with a ground wire. Quite a few more hours and couldn’t find a problem.

On the outside of the house, the flaky segment is just a couple of feet away from the previous one, but via the attic (because of the way it’s constructed) it requires about 50-feet of wire to connect them. So creating an external “jumper” between the two segments was going to be the next step.

Then, while googling the issue, I stumbled on an 2014 post from Daniel Garcia that briefly mentioned too much power to the strip could cause the same problem.

Previous to this, I was always worried about supplying too LITTLE power, so I was tweaking my buck converters to put out just a hair over 5 volts (about 5.2 or 5.3).

I went up to the attic to access the buck converter for that strip, tuned it to just below 5 volts, and HURRAY, no more random flashing!

Now, back to the attic to double-check all the other output voltages.

You can ignore the rest… just want to throw in some key words in case anyone has the same problem in the future. WS2812B LED strip random randomly erratic erratically flashing flash behavior signal wire ground power voltage

Glad you got it worked out, and thanks for sharing! Just curious, what microcontroller are you using, and are you using any sort of level shifter on the data line?

@Jason_Coon Arduino Mega 2560 for now, no level shifter. Might upgrade to a Teensy depending on the performance once all the lights are up.

A level shifter, like the 74HCT245, would also probably fix this issue without having to lower your power supply voltage, right?

@devicer Agreed. I’ve used them in the past for 3 volt sensors on a Mega 2560 for a quadcopter. 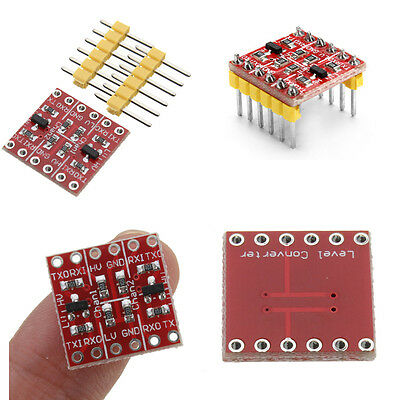 Find many great new & used options and get the best deals for 2 Channel Logic Level Converter TTL Bi-directional Shifter Module For Arduino at the best online prices at eBay! Free shipping for many products!

If I go with a Teensy, I’ll need one as well.

@allanGEE nice, anyone tried those with WS2812 LEDs? They’re shorter than the 74HCT245 I’ve been using.

may I please get the brief version of what a level shifter is? I would really appreciate it

@Leo_Bettinelli If you have a device (Arduino) that wants to send out and receive 5V signals, but a sensor that wants to work with 3.3V, the level shifter acts as a buffer (or translator) – receiving 3V and sending them out as 5V, and vice versa.

The opposite setup. but still using a level shifter, would be a Teensy running on 3V but sending signals to a 5V strip.