I can’t find any topics about this so I thought I should make one. I’m not too active in this community so I don’t know if this is a known and understood issue or not.

Basically I just got my “K40”. It was advertised as a newer, better and narrower(!) 40W laser. Unfortunatelly I didn’t put 2 and 2 together and what I received is a unit that has a 600mm tube installed. From most listings on Amazon, Aliexpress and such this size is indicative of a 30W tube. It does have a port for a longer tube but that’s not what I ordered.

Be careful when buying your unit

(before someone says it, yes, I ordered it on eBay, no, I’m not sure it’ll end favourable for me, yes, the tube was in TEM01 when I received it, no, I haven’t got any local sellers to use (the one shop that has K40 has it priced at just over 2000€ (no, I didn’t mistype the price)).

Here’s a few things I did before I remembered to test the output of the tube. It’s heartbreaking to have to wait for a resolution when I had so much fun with it just yesterday. 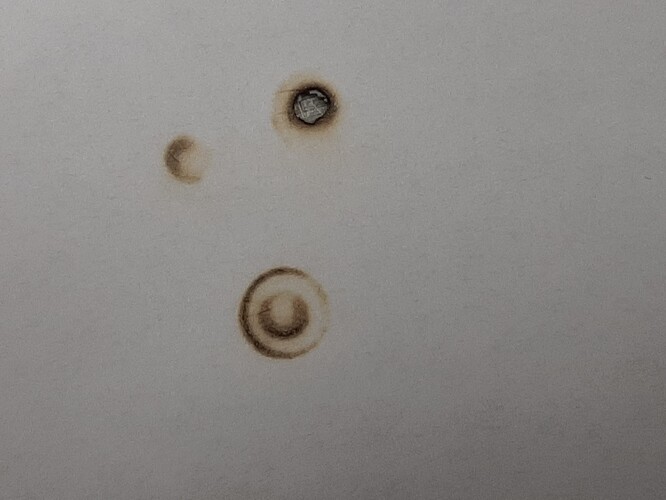 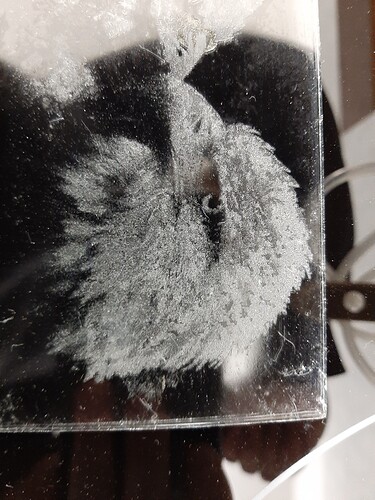 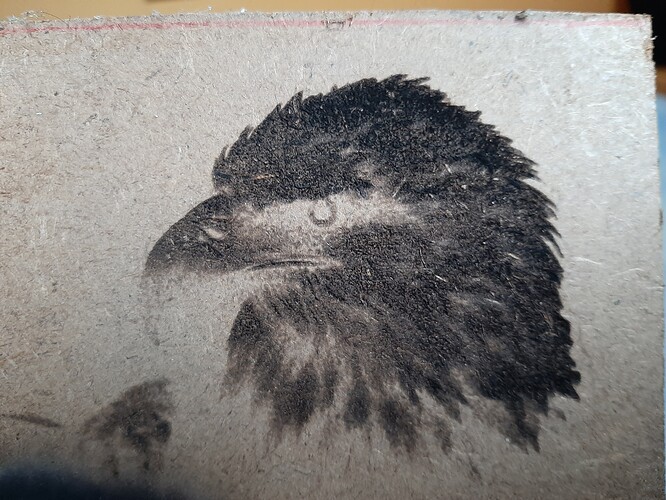 Have a better day than the one I’m having

Yeah, the K40 Intro linked from the top menu bar has a section that includes this:

Smaller (particularly, narrower) units have lower power. The power is a function of the length of the laser tube, which runs horizontally across the back of the unit. The “Mini-K40” is smaller and lower power. Even a typical “K40” is more like a 30W unit than a 40W unit; a typical Mini-K40 is 20-25W.

Not that it matters to you at all, but just for anyone searching the site for example images of degraded TEM, I think that’s TEM10. 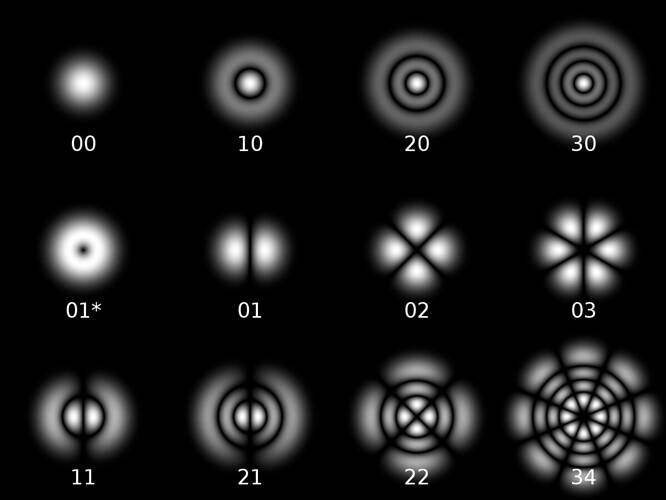 Well dang. I didn’t read it before buying

Isn’t white on the TEM picture representing the presence of light and black the lack of it (TEM00 being the good one pictured with a white dot). Tbh the two donuts confused me a bit but since TEM01 has no light in the center it felt more like what I see. Anyways…

I guess a good question to ask would be: Does this narrow version have a weaker PSU aswell? Asking just in case I get a partial refund and decide to buy the 700mm tube.

Thank you for the answer

It was my interpretation of the burn marks that they looked more like TEM10 than TEM01* because it looked like there was burn in the center. In any case, it doesn’t matter very much since any mode other than TEM00 has reduced performance at best…

@donkjr is most likely of our regulars to know whether it’s common to have a lower-capacity LPS.

I have never seen a lower than 40W supply.
Drop some pictures with model and part #s

And from what I know the standard “K40” is actually only 35 watts anyways, without the extension tube.

I did the samething. The amazon seller tried to convince me it was 40w.

I’m currently 2/3 of the way to a proper reimbursement (they offered 100€ ignoring shipping costs). I think another message should do the trick. I’m thinking of ordering an 850mm tube as it’s only 20€ more.

What I’m not sure about is if I need to upgrade the PSU. The one currently installed is 40W and the 850mm tube is the proper size for an actual 40W laser. Is this compatible or is the 40W PSU also actually 30-35W? I know the PSUs are crap but I did a repair job on my friends “50W” PSU and it looked the exact same as the 40W that is common on the 40W units (blue with fan and 3 green plugs).

Man, sometimes this chinese specs make me want to buy local. But then you look at the price tags and you’re back to your usual self

Thank you for help guys.

What I’m not sure about is if I need to upgrade the PSU. The one currently installed is 40W and the 850mm tube is the proper size for an actual 40W laser. Is this compatible or is the 40W PSU also actually 30-35W? I know the PSUs are crap but I did a repair job on my friends “50W” PSU and it looked the exact same as the 40W that is common on the 40W units (blue with fan and 3 green plugs).

The standard supply should work fine for 40W of light power assuming the supply is good.
A 50W supply should also work ok.
The only difference between a 40 & 50 watt supply “may” be the HVT’s rating.

Thanks for the posts. Don’t have a K40, but have a comment on supply ratings. Looking over the internet it seems that the output power is about 10 to 15% of the input power of the laser tube. I would conclude that a power supply would have to have an ‘input’ rating of at least 400 watts to supply the tube with enough power to produce 10% output or 40 watts. If it says it’s a 40 watt supply but with only 300 watts input, it couldn’t produce enough power to make 40 watts output. Does this make sense? Maybe a ‘back door’ to getting a handle on these supplies performance. Maybe what everyone needs is a laser watt meter… (8’)

Update: got a partial refund, ordered an 800mm Ten-high tube, installed it and it’s working great. Did about two hours of 2mm acrylic yesterday without a problem (well I ran out of acrylic so that’s a problem

Now I need to figure out how to provide enough input air to not starve my exhaust fan when the lid is closed without cutting giand holes in the front panel of the unit. Maybe holes in the bottom with flaps and fans to direct and bounce the air against front panel and back on top of the work surface.

@JKKDev Why not ‘kill one stone 2 birds’, Like here

Use the opening for the ability to insert larger material, that increase the air intake too. But if fume is a concern, add a brush (the kind of brush you put under a door).

Not a bad idea. I’ve got the brush handy too. I’ll see to it when I’ll have some free time.

I have considered getting a watt meter multiple times. Its cost prohibitive for me and after making measurements what would I do with the actual watt information? In cases where I need more detailed information have found that a piece of acrylic on edge does a good job of revealing relative power and beam shape.

I believe that the wattage rating on the supply means that it is for a 40 watt laser not that that it is rated at 40 watts of electrical power.
Generally the laser requires 15,000 DCV @ .03 amps to cut. This works out to be about 450 watts. If the laser outputted 40 watts that would mean (as you have suggested) that the optical power is about 10% of the electrical power. These are rough calculations as the actual output when a tube ionizes is a complex waveform. Published specs aside, from knowing the internals of the supply I know that the supply is capable of outputting 30 ma at 15,000 DCV … that is until the HV diode inside the HVT gives up.

Yup, 90% of the input energy is output as heat, and not the actual laser beam. Very inefficient devices. But majorly fun to play with

Yep, I was actually looking at Om Techs power supplies and checking out the actually input wattage to the supply from the mains of those that include it. Since I cannot go to OMTechs site (Linux Firefox won’t load it) I went to this amazon link.

I have screen shots of the supplies placard. Don’t know how to embed an image, unfortunately. The stated watts for a specific tube. What strike me odd is that output wattage seems to vary, sometimes the wrong way… I computed (correctly, I hope) the wattage of the various supplies with the HV and current limits or what should be available to the tube.

For some reason I don’t have faith in these numbers. Maybe it’s just Amazons typos.

I understand the truth is in the performance, but these discussions are difficult without some sort of instrumentation to confirm the results. I purchased one, mainly to identify losses in the laser path from the emitting end of the tube through all the mirrors and lens. I also have HV probe (Heathkit VTVM) so I can check voltages. But I like to fiddle with this stuff… But the logic here eludes me.

Yep, watched this video on EEVBlog about an argon laser. Interesting, if you like this type of stuff.

It’s output is 10 watts, it’s power supply input is 10kw, not too efficient. They are used in visual displays…

It’s in this order, but can’t really get it formatted…

this will help in formatting tables: Create a table using markdown on your Discourse forum - tips & tricks - Discourse Meta

I also have HV probe (Heathkit VTVM) so I can check voltages.

Just be extremely careful. This LPS is NO JOKE LETHAL.
This power supply is capable of 30+ma at ridiculously high voltage and can easily jump 2" to ground and/or your body. You likely will not get a second chance if you get hit with it.

I do not get near the HV end of the LPS unless the supply is installed in my testing jig… one which has HV safety features.

I have long since stopped repairing and investigating this supply because it’s silently SCARY!
I only spend time finding ways to safely tell if they are bad because they are not economical to repair. 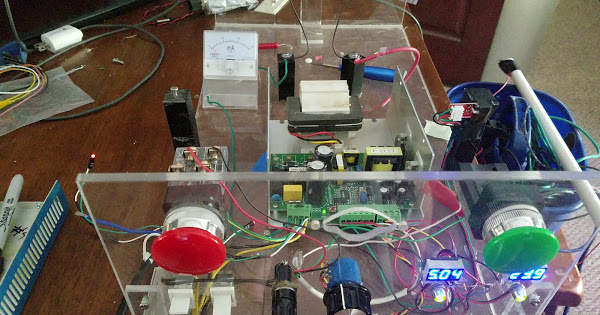 I was actually looking at Om Techs power supplies

I have had great luck using power supplies purchased from OMT. The best part is that they stand behind them when they fail. I have used a couple of them and the one that failed was replaced quickly without any hassles.