Prusa i3 clone direct extruder 1.75mm.
Anyone know how to troubleshoot problem A and B?
A happens on every start/end layer.
B have ripple look, i guess this is acceleration setting in marlin but there’s more than one setting called acceleration. 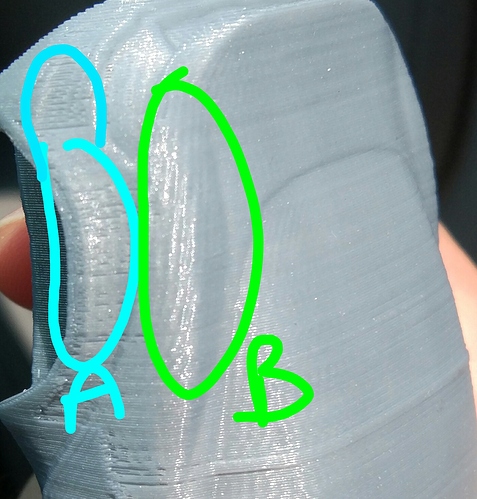 Looks to me link “A” is showing momentary underextrusion, and “B” appears to be “ringing” or “ghosting” around the edge. Both these can be a factor of printing too fast (among other things) So I’d try dropping the speed 10-15% and see if that helps first.

Ringing is caused by any backlash or flexibility in the motion system that shows up on direction changes. Reducing the print speed among other settings can reduce this. As can reducing the acceleration and jerk settings. I’d make sure the belts are taught and the frame is tightened down before making too many firmware changes though.

The underextrusion at “A” appears to be showing up at the perimeter seam. This could be an issue with your printer not pressurizing the nozzle quick enough after a retraction, or leaking too much plastic during travel moves. It could also be caused by the filament drive momentarily slipping. The rest of the perimeter seems pretty solid. Not always easy to tell whats going on from a single picture. Turning on/off the 'retract at layer change" in your slicer may have an effect, a “last resort” in my opinion is to add a tiny bit of “extra length on restart” if it is an option in your slicing settings.Maybe someone else will see something I missed or have some different input.

What slicer are you using?
Cura is generally the best free. Simplify3d is awesome for a few $.
A-Could also be moisture in filament.