During the cnc build of a Longsworth chuck

I ran into a cutting error that is baffling me.

I test cut this job some time ago and it worked fine. 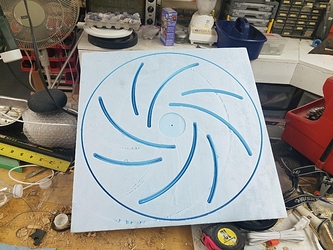 I got a face plate and a new bit for plywood, made some mods to the design to “optomiz” the CAM. I also changed to a larger and better bit (1/4") and best I can tell that is when this problem started. Then I proceeded to cut the final material.

The problem:
On the second arc it cuts the clockwise (G2) arc fine and then on the return (G3) it cuts a straight line vs returning on the same arcs path.

It cuts the center area (for face-plate) and the first arc fine. While cutting the second arc, on the first CCW arc it does not follow the arc, but rather a straight line back to its starting position. Subsequent arcs have similar albeit more complex forms of the same problem.

Its as if when cutting the second arc instead of a G3 move it just makes a linear move back to the start.

Answers to these questions would be helpful?

My album for this project is here

Im not very experienced with Arcs per se, but I do recall seeing a post or hearing a comment from John that the simulator does not simulate Arcs.

I am using a tiny g on my machine and would be happy to run the code on my set up to see if I can reproduce the issue.

Not sure the file is too large to post here if you want you can email it to me to give it a try this weekend.
grantlesueur@gmail.com

Grant,
I will definitely share the file with you to try it. I can share it on f360 if I had an email.address?
We can share the email by a PM.

This issues makes me think it’s the TinyG firmware. There were historical arc translation problems on TinyG. I thought those were all solved, but might you have an older firmware?

I will check the firmware but what puzzles me is that the test cut worked fine (see first picture).

Hmm. The arc issue I believe is the direction that it entered into or out of the arc. Was it the exact same Gcode? I, too, have found that even on my current firmware, there is very rarely some straight line move that ruins my work piece. I think it happens if I’ve paused the job via ~ and then resumed, but it is frustrating. Although, I may be on old firmware at this point because I haven’t upgraded it in a while.

It was not the exact gcode as I made some mods and then rebuilt.
I’m trying to go back to that version and look at differences.

I’ve run into this. Changed post processors fanuc, fadel, haas, no success. Down revved dxf autocad files to r12 before running cam software to break arcs into lines, no success. What finally works is shutting down your computer and doing a nice clean restart of the JSON server.

Huh, so you think this problem originates in ChilliPeper?

Not necessarily, seems like when it happens ive been running my computer without reset for awhile, or starting and stopping json server. I run ubuntu, sometimes even though i force stopped the server and close all the terminal windows json will tell me there’s already an instance of json running. Did restarting solve your issue?

haven’t tried it yet…