Problem is blowing the First pixel and subsequently losing control of the strip. I'm having

Problem is blowing the First pixel and subsequently losing control of the strip. I’m having this problem … hoping the community might be able to help.

I will attach a quick sketch I drew showing wiring but this is what I think is the crux of the problem. I posted a video of the system working earlier and it works great for awhile but twice now it has failed, both times blowing LED 1. The LEDs start front center and wrap around the car. The Mega is under the dash.

Power comes from the car batter @ 12V using a converter to step it down to 5V. I am injecting power in between Pixel 2 and 3, again somewhere around pixel 75 and again around pixel 130.

I am running the system from a Mega. The Mega is getting it’s power up the line, the closest point being pixel 3.

The Mega is installed under the dash with 1M connecting the 1st pixel. The 2nd pixel is also 1M from the 1st pixel. I am using these 2 pixels like repeaters to get to the main strip.

I do not have resistors or caps in the line anywhere. I am a little bit befuddled as to how to proceed.

As a secondary question… when I add power to the strip sometimes pixels 3,4,5 will light. usually in a blue hue. Sometimes they wont… not sure why this is happening either. 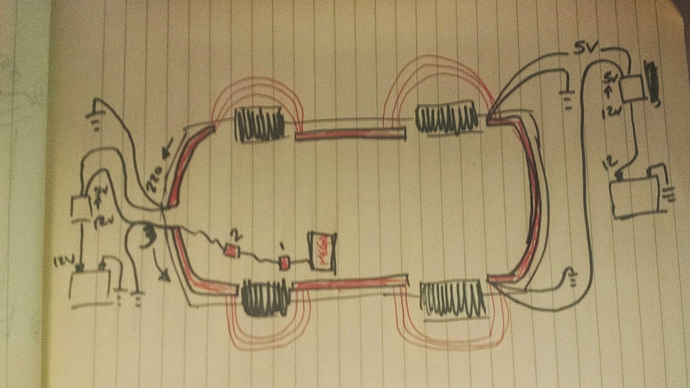 That would be my next try… I am curious if anyone has an idea on why pixel 1 would pop when power is coming past pixel 2 and it stays good.

also Caps at every power point … clear enough… where does the resistor go? between pixel 1 and the board? I guess I do not understand the purpose of the resistor.

Usually you put a resistor on the data pin — but that probably isn’t your problem.

Everything you need to know : https://learn.adafruit.com/adafruit-neopixel-uberguide/overview

Hi, I had the same problem some days ago - also with a Mega2560. It worked all fine for month and then the first LED died 5 times in 3 days. That protection circuit was reccomended here and seems to avoid more victims since I use it: http://www.corbinstreehouse.com/blog/2014/03/led-cyr-wheel-ws2811-ws2812-strip-first-pixel-dyingburning-out/ edit: I used already a cap and a resistor while the issue occurred.

The problem seems to be a too high voltage on the data line. Happens also, when the Mega is powered before the leds.

Stefan thanks for the link, I read the articles and it seems as though I am not the only one. For anyone else stumbling on to this is appears as though the power on the DI of px1 is very temperamental. I think it’s possible my problem might have occurred when starting the car while the system was on an running. This is something I want to be able to do but at least it’s a clue.

Never cut power to the LEDs while their being fed data, is what I’ve learned the hard way. I lack EE knowledge but I am thinking there has to be a way to easily cut data to the strips if the strips don’t have power.

Jon, really? I do that all the time—or does it make a difference if your controller stayed powered and the “bulk power” for the LEDs goes off?

I fried a WS2812b by leaving the arduino powered and pumping data, to a LED strip that had no power.
EDIT: there was no resistor on the data line.

Really!? I did not know that was even an issue, shit

Can anybody else confirm that sending data to LEDs with no power will fry them? I would expect it to happen more so because of voltage spikes when powering a power supply on or off…

I thought it was because the LED is trying to power itself from the data line. without a resistor you cannot control current .

For the record I was wired to the battery of the car through a stepdown. We lost the pixel when we started the car with an animation running. Maybe could have been a spike. Maybe it was because there was a meter of wire between the controller and px1. I am going to add caps, diode, and resistor as well as putting px1 close to the controller and try again.

Kevin what controller? I tried with 2 meters of cable and it failed. Ringing and lots of misfires. I added the 2 pixels as repeaters. Turns out they are acting like fuses!

Arduino nano. I also use 12V leds though so that helps with any voltage drop.
What gauge of wire are you using?