Powering fans (and other mods)

My electrical/electronics knowledge has a lot of gaps, so I hope you’ll bear with me

I’m in the UK, and I’ve got a K40 with a MYJG40W PSU. I replaced the 2-pin power cable that came with it (laser to wall plug) with a proper 3-pin kettle lead, and comparing what I see inside to a guide online it seems to be properly earthed through that power lead. It has two 2-pin power outlets on the back, one of which I run the pump off.

My question is: I’m adding an air assist unit with two 12 volt DC fans (and may in the future add another fan to create positive pressure, more lights etc) - am I best to power them off the 24v output of the PSU with a voltage converter, off their own 12v power supply out of the other power outlet on the back (do those effectively just act like a power splitter off the mains?) or keep them completely independent of the laser cutter and use another wall socket? I’ve gathered the basic PSU isn’t up to much and I’m sure I’ve seen somewhere that it’s a bad idea to add more load to it…thoughts?

Don’t use the 24V from the LPS it barely has enough to run the steppers.
I would wire in a separate 12V supply with mains wired through the main switch.
There are many uses for 12V accessories in a K40 so you will not be wasting a separate supply.

The K40 Intro linked to in the header is a summary article with lots of advice that links to other pages with more advice. Among them is this gem:

What else do I need besides my K40? Requirements and Recommendations Getting Started

The K40 is incomplete as shipped. You need a source of cooling water before you ever connect power, and you will typically need to replace the exhaust duct when you vent the exhaust outside, which you must do. Water temperature sensing may save your $100+ tube. It is a good idea to add a switched power strip to control the K40, water pump, and exhaust fan from a single switch. There are several other recommended upgrades that you are likely to also want to do. The most minimal cooling water res…

The K40’s stock power supply is adequate, just barely, for K40 operations. If you add stuff on (like LED strips for strips for viewing the lasing through the window while engraving, or for better visibility to set up stock to work on) it may cause issues because the power supply is just barely able to put out the power required without those additions.

A fan will draw substantially more power than a few LEDs, generally speaking.

It sounds like you are trying to use fans for air assist. That’s probably not the best route. That same article has a better suggestion for air assist, to use an aquarium pump. They come in different capacities, but even a tiny aquarium pump will be better than fans, which would be basically useless.

That’s what I suspected, thank you

Thank you for that - yep, that bit about the power supply not being adequate was the quote I was thinking of, forgot it had actually come from these forums

The air assist is this kit: https://www.ebay.co.uk/itm/K40-Laser-Cutter-Air-Assist-Nozzle-for-40-50W-CO2-12V-TWIN-FAN-KIT/254421536466 which directs the fans through a nozzle. You may be right about it not being effective, I haven’t done the maths to compare the flow/pressure to the aquarium pump method but it’s on the way already so I’ll give it a try at least. It’s not expensive so worst case scenario if it’s not up to the job I can still remove the fans and stick an aquarium pump pipe into the nozzle

If the fans run faster in the assembly than in free air, they won’t do anything useful for you. (If this doesn’t make sense as a test, have you ever blocked the nozzle of a vacuum cleaner?) Looking at the picture in that ebay listing, it really looks to me like it’s doing nothing for impedance matching. This is similar to part cooling fans on 3D printers, which even with a very short nozzle like this is done with a radial fan. 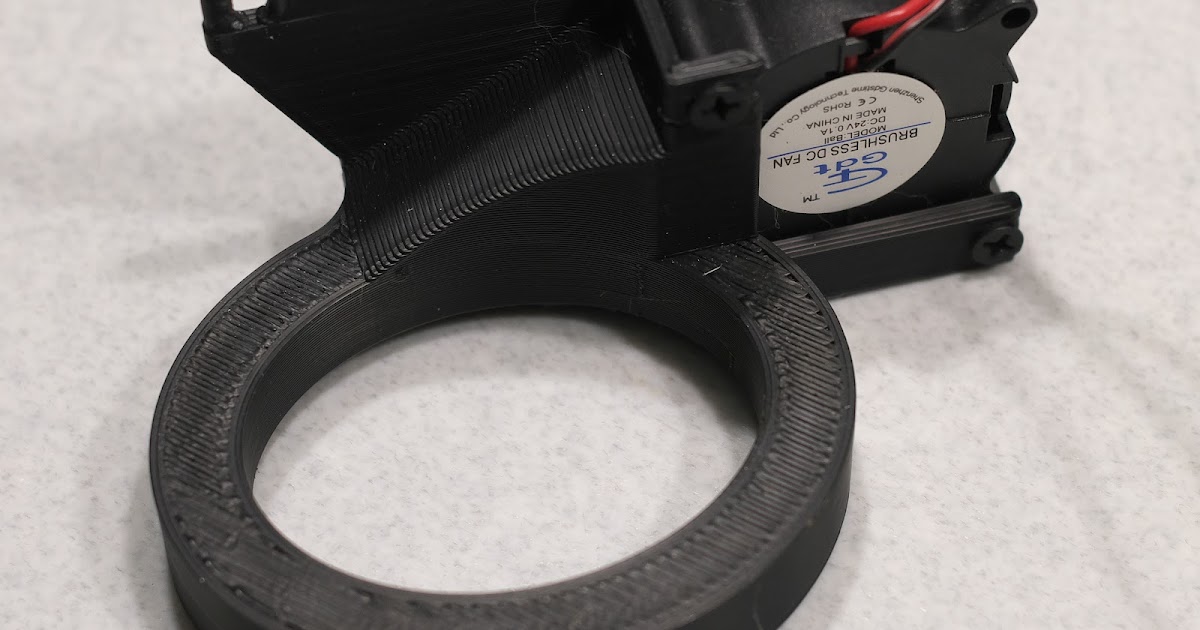 The Mother of All Print Cooling Fans

using a CPAP blower as a print cooling fan

Those videos and my suggestion that people test their print cooling fans to see if there’s any air actually coming out of them generated so much vitriol and animosity that I decided it was time to delete my reddit account.

The point of the videos is not that I designed a bad duct. The point is that predicting what a compressible fluid like air will do when you try to move it through a duct and out a nozzle is not intuitive. You can design the most aesthetically pleasing duct and nozzle in the world, but ordinary mortals can’t be sure that air is going to come out of it until they actually check it. Checking it is as simple as putting your finger, a flame, a piece of string, or trying to blow a ping pong ball across a table to see if there’s any air flow. Once you’ve established that there is air flow, you can try printing to see if there’s enough air flow and if it’s going in the right direction.

So before even bothering installing this in your laser cutter, I would suggest doing some tests to see if it actually moves air.

Regarding using this to hold an aquarium tube, there are many simpler ways to make a nozzle. An example is a short length of narrow copper tube cable-tied to the head, which can easily be bent until it points in exactly the right direction.

I mean run the 12V power to the switched side of the K40’s main power switch.
Certainly, you can wire its AC from any AC source including the wall or one of the K40 accessory switches. I suggested the K40 main switch so the fan will turn on and off with the machine.

If it were me I would wire its AC to the main K40 switch then add a separate switch on its output to the fan so that the fan can be turned on/off independent of other 12v accessories.

Mark, if you go ahead with that ebay air assist mod, please do feed back to us.

Absolutely, will do. As @mcdanlj says it may not do anything, I’m hoping the two fans focussed through the nozzle will give enough airflow but I realise they’re not really designed to create pressure against resistance, but I haven’t seen this approach tested anywhere so who knows, maybe the maker knows something

I would expect that putting a valve in place to regulate air flow, as well as narrow diameter tube, would provide the expected back pressure.

At least I hope so; I am using a larger version of a similar pump for my 100W build!

Well guys, you were quite right - that rig is completely ineffective

I almost had to have my finger over the end to feel the breeze coming out of it. Live and learn, it’s going back and I’ll go the pump route.