I did ohm out the POT, it’s 1k. Also, I used a new analog multimeter and the voltage is 5ish volts not the 1.8 like I was seeing with my old digital multimeter. So, ignore the 1.8v there is 5v across the Black and Orange wires.

Sorry for the confusion. I thought it was strange that a new power supply wouldn’t be showing the right voltage so that’s when I broke out the analog multimeter to double check myself.

So, what’s next since there are 5v?

I’ll pick this conversation up tomorrow. It’s getting late for me.

Thank you guys. I feel like I’m finally getting somewhere.

I can get it to peg by turning it up all the way but nothing comes out of the laser. The laser is still firing (tube is lighting up) but nothing burns above 8-10mA.

I was confused by this:

Do you have an analog ammeter that you are using to measure that current?

Oh, and I’m using a digital meter. It’s all I have available to me.

I thought you meant on the panel. But then I see this picture: 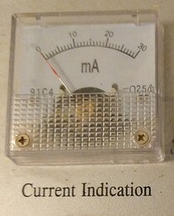 So every time you say “8-10mA” it is measured by this analog ammeter on your panel, correct?

But then it looks like my confusion was accidentally helpful…

Also, I used a new analog multimeter and the voltage is 5ish volts not the 1.8 like I was seeing with my old digital multimeter.

Just checking: Did you make sure you have good batteries in the digital multimeter? Good idea cross-checking though! I recently experienced an older digital multimeter, even with fresh batteries, measuring very wrong, cross-checked against a newer (and much higher quality) multimeter. Quis custodiet ipsos custodes?

Probably worth shifting attention to the tube.

Instructions for filling in the table(s) above:

Sorry for the confusion. I didn’t realize what you were referring to about the analog or digital ammeter until after I responded to your post. And yes, when I said 8-10mA I was referring to the analog ammeter.

To answer your two questions:

Those are the numbers I get, Don. I ran the tests three times with the new analog multimeter and those are the average of the three tests. Also, below is a link to the test Michael asked me to do for him. 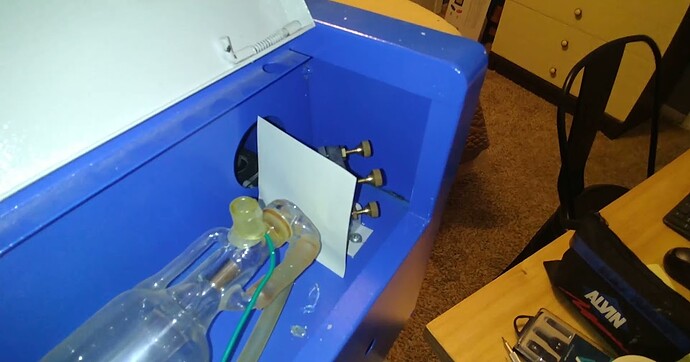 Ah, I was wondering about a close-up of the paper after a short firing, to see whether it looked like the tube had shifted mode. I can’t quite tell in the video. Do you know about TEM01* mode (“donut mode”)? It looks in the video like it might have shifted. Here’s our into page that has more on these modes:

Where can I find K40 replacement parts? Getting Started

Many parts of your new K40 may break or wear out, and it probably didn’t come with a catalog of replacement parts. Here’s where to start. Laser tube The laser tube in the K40 is what industry calls a “wear item”, and it will wear out in the normal and proper use of the machine. Glass CO2 lasers are often rated for a life of ~5000 power-on hours. When they are misused by running them with too much current (power) they wear out faster. When they are poorly cooled, they wear out faster. When they…

Those values for power control are correct.
Given you have good control voltage and you can reach max current I would now look at the tube and optics.

As @mcdanlj we need to see a clean burn on something at the lasers first mirror.
Hold the fire only long enough to make a mark but not burn…

Okay, I’ll do the mark test when I get home in about an hour.

So, if it looks like I need to replace the laser tube, I’ve checked out the links provided on this site but what about getting a more powerful laser? 50 or 60w unit? I know it’s not just a matter of swapping out laser tubes but what about the power supply? Even if I modify my case to accept a larger tube, would I need a larger PS?

Just some things I’m thinking about while you guys help me troubleshoot this problem.

Here is a picture of the test burns. The ammeter said it was about 10mA for each test. 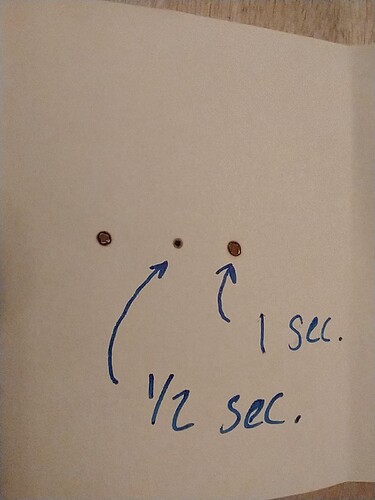 Yes you would need a more powerful supply if you want the added optical power.

… and if I remember correctly above 10ma you get no burn at all???

I don’t know what laser tube you had in your machine but a typical K40 is cheap because the laser tube is also low grade. It is the main reason for it often being said to limit your maximum current to less than 18mA so your tube lasts longer.

But, when you purchase a replacement tube, you can find 40W tubes which have been tested at 50W which means you can then drive the tube at a full 40W( 20ms-24mA ) of power instead of 18mA and I think the stock 40W LPS can handle that power level.

Some people have purchased 50W tubes(tested to 60W) and 50W LPS and installed in the K40 by cutting a hole for the tube to fit(sticks out one end) and put a box over the exposed tube end.

I’ve decided against the possible upgrade for now. But thanks for the information.

I don’t get any burn above 10mA, that is correct. The laser fires but nothing comes out at the end of the tube. Soooo. Replace the tube?

It’s tempting to go with “its the tube” because the LPS seems to test OK and that is all that is left. Normally in weird unresolved cases I recommend to first replace the LPS then the tube as they are both consumables anyway. In this case the LPS is already new … uggh!

I am unsettled as the symptoms do not correlate with my experience:

I reviewed this thread again. We clearly verified that the LPS’s control is working and the laser can be fired. We do not know that its output is good across its range of control. It high voltage output makes it impossible to measure it. The typical failure for these LPS is the HVT shorting and reducing or preventing output.

So now I wonder if the LPS high voltage drops at control levels >10ma.

A new hypothesis:
At higher voltages the HVT develops an internal short and parasitic current is drawn to ground rather than through the tube. There may be enough voltage for the tube to ionize but not properly laze at the right power level.

The control voltage “IN” changes at level >10ma.

If this hypothesis were the case:

What does not support this hypothesis.

… When I said the ammeter is pegged, I can get it to peg by turning it up all the way but nothing comes out of the laser.

I wonder:
We had meter problems with measurements early in this thread when we were measuring “IN” during firing. With an alternate meter we ended up measuring the correct voltages on “IN” when not firing. We never went back and measured with the alternate meter what “IN” does when firing at settings above 10ma?

A question in my mind now is;
What is the voltage on IN when;

Perhaps the above is one last stab in the dark before a new tube?

I’ve been really curious about the color of the laser light in the tube during this working then not-working transition too.

Doug, the color of the laser is always blueish purple and it appears to increase intensity as I turn up the power. It’s not a dramatic visual through the power spectrum but it’s definitely noticeable.

Some more back story information.

This isn’t the first time I’ve had this problem. The first time was about 2 years after buying the machine. Back then everything I read suggested replacing three parts, cheapest to most expensive. The POT, LPS, and finally the laser tube itself. I thought surely the laser tube and LPS couldn’t be the issue because they seemed like the most robust out of the three components. So, I replaced the POT with a recommended model. It worked, for about a month. Then, the same thing started happening. So, I bought a new power supply, recommended unit, and that fixed the problem. Fast forward a couple of years later and today I’m having the same issue. This time I skip the POT and buy a new LPS. After all, everything I read or saw on YouTube said these machines are notorious for having an LPS problem. The trouble with the flyback transformer in particular. Well, after replacing the LPS, again, the problem didn’t go away. So, a new POT was ordered, the same model as the last one and that didn’t fix the problem.

So, I’m wondering if it’s a problem with the laser tube. At least that’s what I keep wondering. Because it’s the only original part that has not been replaced.

I think I might just borrow a multimeter and run those tests. This way I know the readings I get will be accurate.

Don, so I ran the tests as you suggested. This time with a friends multimeter as well as with mine. In both instances, the numbers where the same.

During the test I discovered something a bit interesting I hadn’t noticed before. The longer I held down the Test fire button the less intense the burn became over time. Within 30 secs. or so, the laser would fire intermittently. The power levels never dropped at the “IN” but the laser beam would weaken and spit and sputter within a minute or less of holding down the Test fire button. It never completely stopped firing but it would sputter a lot. 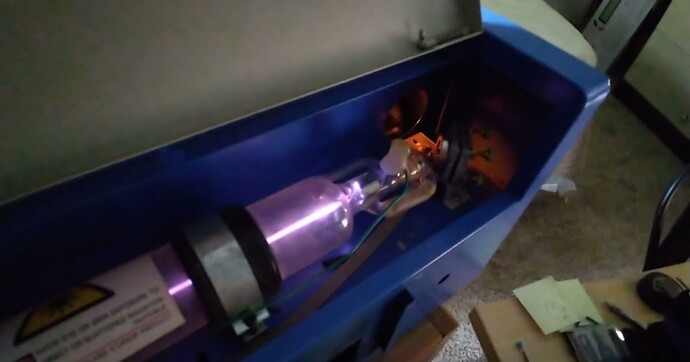 I could not hear any crackling noise but if you do hear a crackling noise I would look for where it is coming from. If it is along the high voltage wire to the tube then from the other end of the tube to the ampere meter and then back to the LPS. There should be no crackling sound and it could be the higher power( >10mA ) is seeing the laser power jumping to something else. Sometimes if you turn all the lights off you can see where the sparking is coming from.

It is not uncommon and it is why they shop the K40 with a tube of insulation silicon.

The crackling sound is coming from the burning end at the lens not near the laser tube itself. It makes this crackling sound at lower power settings. Almost like a high pitched soft buzzing. Kind of like a broken speaker makes as the coil rubs past the magnet. 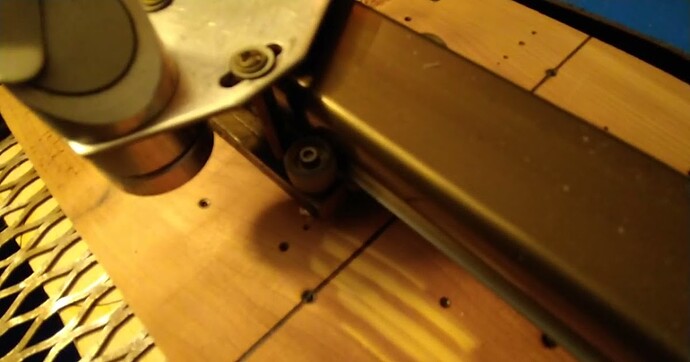