What’s “like no other” about it? That wasn’t clear to me at a glance…

I’m not big into the 3d printing world yet, but the articulation of the print head seems unique?

Hmm, they think that they make specious claims in their video about being the only simple 3D printer that mean I doubt the rest of their claims. SCARA printers have been around for a while though I think that kits or production versions are uncommon in practice. Here’s a HAD from 10 months ago: 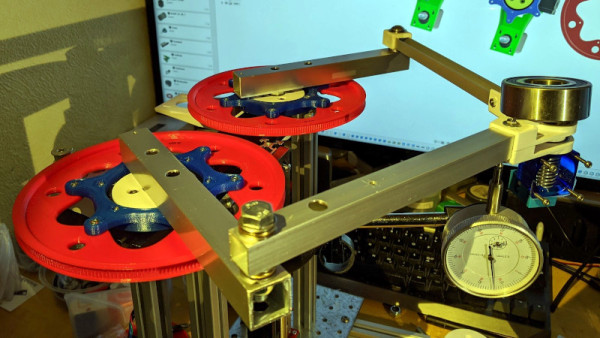 We see a lot of 3D printers here at Hackaday, but as over the years the 3D printer has moved from being an exciting item in its own right to being an everyday tool, it’s increasingly rare for…

SCARA does mean resolution isn’t the same across the print, so I’d think I’d reserve it for organic models. (And I don’t typically do organic models…)

I see Brook Drumm (founder of Printrbot) is part of the team! At the very least, that lends some credibility to it.

Yeah, saw that on twitter just now. Does make it more likely that it will at least function, even if the claims are a bit over the top IMHO.

I paid $300 for a Makibox that never arrived.

But I have had 2 Printrbots. I’d consider this if I didn’t already have a 3D printer.

I don’t expect any advantage from that kinematics. It’s not very efficient in using workspace. It needs a lot of space for a very limited printarea.
I belief that Brook was only involved for marketing / publicity reason (which I don’t understand as he had to shut down printrbot in 2018).

He said on twitter he was involved in design, and given the hot end in use that seems likely since AFAICT no one else uses that hot end on new designs.

But his printrbot metal simple was at least solid and reliable; I helped a friend some time ago to rescue one that had suffered an electrical incident and the mechanics were quite sound.

I think the main value in dual-arm SCARA kinematics is novelty. But sometimes novelty sells, so OK I guess…

I think the “secret sauce” here is their smartphone apps. But they say they won’t restrict you from using your own software. I assume this means it will work with traditional open source toolchains. Also, I noticed it uses piezoelectric sensors under the bed for automatic bed leveling (tramming), as I’ve often seen in delta-style 3d printers. I think this could be a pretty good printer for neophytes who just want one that works, and the price, while not anything special, is reasonable if it delivers on its goal of being a “one click print” that “just works”.