After my previous post about the basic considerations for a DIY resin printer I got a few questions about choosing projectors and LCDs, so I decided to provide additional insight from my experience because choosing the best light engine from the available options is about much more than just total light output.
https://bairdlabs.wordpress.com/2017/02/10/diy-resin-printer-more-specifics-on-light-engines/

great choice for a printing subject.

Not much build volume, but interesting nonetheless! 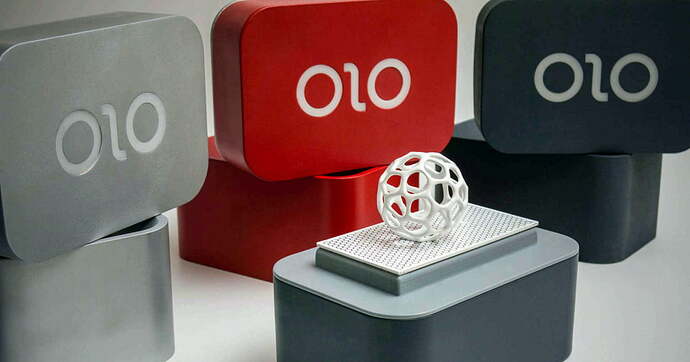 Unveiled at Maker Faire New York last week, OLO is designed to take any smartphone under the sun and transform it into a fully-functional 3D printer.

The OLO (or now the ONO after a dispute over the name) does seem interesting. It uses visible light curing resin, so is a little different than what I’m describing here, but the possibility of using a phone you already own does lower the barrier for entry.

I actually backed it at $1 so I could stay in the loop on it, but not any more because I didn’t really trust them to deliver.

They’re a bit late on delivery now, but they haven’t disappeared and at least seem to still be making progress, so we will see what comes of it.

focus/sharpness and brightness are key! Do you think it would be possible to use an ultrabrite uv light source which would be behind an high resolution monochrome LCD “pixel gate/shutter” and something else interesting to add intermediately to the screen and the resin tank would be a “privacy” film screen, which would limit diffusion of the light thus creating a more detailed print!..kind of like how a honeycomb grid works for photographic lighting!

Stephen this is very interesting. Thank you for sharing your experiment

@Fook_INGSOC This has already been actively experimented with with great results. The issue is that you have to replace the existing cathode backlighting of an LCD with an array of UV LED’s, but it’s easily doable. Not sure why people still use DLP projectors when this is possible though.

I know using high resolution monochrome displays was an area of interest for some people, but those panels are expensive new and not easy to source used. The supply can be pretty hit and miss.

The theory was they would work well for near-UV/405-420nm light, but I don’t know if anyone successfully tested one.

As for the privacy screen I don’t know if it would provide significant benefit. With the vat pressed directly up against the screen the only space for diffusion is the thickness of the FEP film itself, which is extremely thin. I don’t have any data or experience to back that up, but I don’t think diffusion is a big problem for LCD printers.

I would also be concerned that privacy screens usually have a smoked color and would likely absorb additional light.

@Stephen_Baird It’s cheaper to use a full colour LCD display and just output monochrome. You can pick up a good 2560xwhatever, 7" screen with the driver for somewhere around $100 on Ali Express. That plus an array of UV LED’s is well under the cost of a DLP projector that would work unmodified.

There is a physical construction difference between monochrome and color LCDs. In a monochrome LCD each pixel is just a pass-through for the light. In a color LCD the sub-pixels have red, green, and blue filters on them to allow each pixel to display a color based on which sub-pixel is energized (with white being all sub-pixels passing light at once).

A monochrome LCD should, in theory, allow more light to pass because there are no color filters. For a resin printer application a physically monochrome LCD would be preferred because you want the maximum amount of your backlight source passed, you don’t care about the color coming through because you only want to gate light not reproduce a color.

The downside to monochrome LCDs is the cost, to get them for anything approaching reasonable you’re going to have to buy a surplus medical imaging monitor and scrap it to get the panel and driver out. Those are going to be high resolution, but physically large, increasing the difficulty of constructing a backlight for it and reducing the maximum surface resolution you can get (while also increasing the build area).

The smaller, cheaper, 2k panels in use in things like the YHD-101 are just fine and represent the simplest and lowest cost solution at the moment.

DLP projectors are still a valid choice, though. The cost is higher, but they give greater flexibility by allowing you to produce larger objects at lower resolution or smaller objects at higher resolution depending on your needs and how you focus it, and they’re also not as physically fragile as an LCD. It’s a lot harder to break a DLP projector in a resin printer than an LCD.

If I were building a brand new printer at the moment I’d build it around that 2k LCD and a high power 405nm LED, but that’s partially because I’ve already experimented with a DLP based projector.

But even with the extra “shutters” the curing time would be a different of barely a few miliseconds per layer, which may add up to less than 10 extra seconds for an entire print depending on print volume. It’s such a negligible amount of extra time curing that the ~$500 - $800 price difference between it and a DLP, and even more between it and a monochrome display, is well worth it.
As for fragility, This is simply countered by building a good housing for your screen, something should already be done.