How about a Smoothieboard with the most silent drivers available? And as if this wasn’t enough, there are also 6 of them! @raykholo @Arthur_Wolf #multiextrusionproblems #cantgetenough #smoothieware 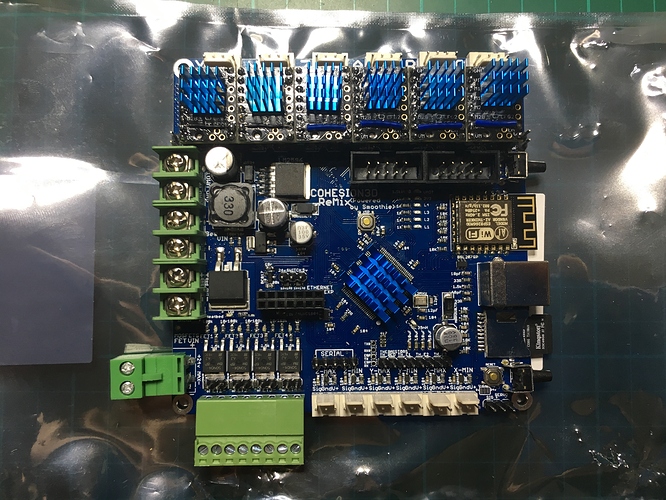 Nice, what are the blue and black bridges on the drivers?

@Nicolas_Arias needed to configure their behavior. These are TMC2100 “silent stepsticks” and with this bridge, they are running in “spreadcycle”-mode. There is also a even more silent “stealthchop”-mode, but it is too weak for most usecases in 3d-printers.

@Rene_Jurack ah, that would explain the low torque I have been hearing about, and good to know there is a way to overcome it while still remaining quiet.

Have the same config here with those fantastic TMC 2100. Take also a look at what’s coming with the TMC 2130. More info here:

Adjust the phase current, crank up the microstepping, and forget about it — that’s what most people want out of a stepper motor driver IC. Although they power most of our CNC machines a…

Adjust the phase current, crank up the microstepping, and forget about it — that’s what most people want out of a stepper motor driver IC. Although they power most of our CNC machines a…

The 2130 is going to be interesting. It needs SPI to set up, which means in addition to plugging it into the socket we’d need to run some wires to a SPI bus (which I have broken out to the GLCD connectors on that board). I might design some up.

Will using SPI introduce any lag?

would love to see it in action with those drivers.

@SirGeekALot hopefully what we end up doing in software is to just use SPI to initialize on boot. Then we’d still use the step/dir interface for motion going forward. We want to use the acceleration profiles generated by smoothie.

The Duet Wifi already uses TMC2660s with SPI setup, it’s an absolutely great driver. Basically the same featureset as the TMC2130 but with a MUCH higher current rating. The Duet Wifi uses them as permanent onboard drivers.

I don’t think the Pololu footprint really makes sense for SPI drivers – in my opinion it’s counterproductive to have the same physical socket if you don’t also have compatible pinout and configuration. When you have a really good next-gen driver paired with a 32bit controller, there just isn’t much value in a swappable daughter board.

Would a Melzi board from a Wanhao I3 be able to be replaced with the Smoothie board?

@Rene_Jurack any luck with those 2130’s on smoothieware? Trying to do similar

Yepp, standard TMC2100’s in the picture. I don’t see the need for 2130’s AND the amount of work to get them working and using their advantages above the normal 2100’s…