Originally shared by Michał Wilhelm Jany I was so disappointed with toshiba tb6560 chip,

I was so disappointed with toshiba tb6560 chip, so I build my own driver with half h-bridge and atmega 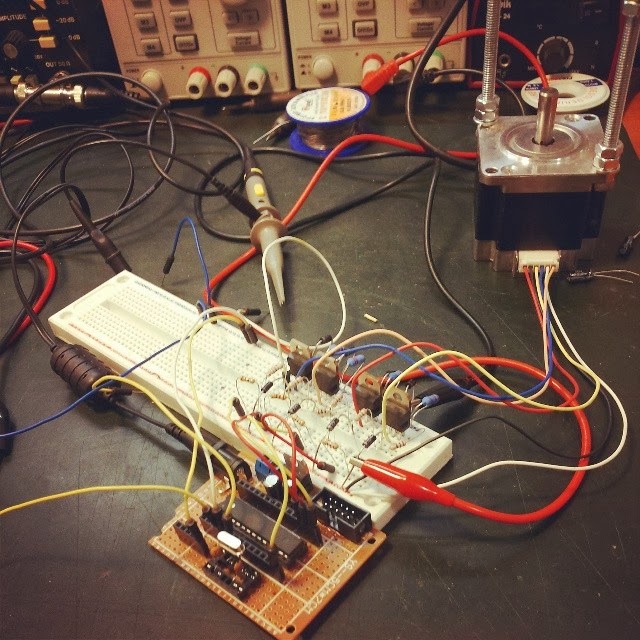 sure! In next week i will prepare article on my blog (http://www.leniwiec.org/en/)

Does your driver do current limiting? What voltage are you running at?
Here are a couple of videos of one of my TB6560 drivers I made

Yes, current is limited and voltage ? It powers up stepper in constant current mode, so voltage on coils changed… Main power supply is around 12V but can be up to somewhere around 30-40 Volts, depends on components used.

Is that a unipolar motor? I’ve made drivers for those too, but I did not use a TB6560 for that. I used an SLA7026 No videos of that but they run well too.

Yes, it is unpolar motor. And it is powered unipolar way (each unpolar motor can be also driven bipolar). TB6560 in my opinion is realy crap… event toshiba realize that and produce tb6600 in replacment. I don’t really get it, why tons of people make driver with this or other chips, they are expensive, can;t be fixed and they can be really easy damage.

@Paul_Frederick are you happy with this tb6560 ? was there any problems during assembly ? Do you test it already in real world with many hours work ? For me, the biggest problem with this chip, was lack of any protection

@Michal_Wilhelm_Jany
For the price I can’t really complain. I think I paid about $3.50 for each for the ones I bought. It is easy to make a driver with one too. Although it is not simple to use TB6560s right. My biggest complaint is the low voltage handling capacity of them. Toshiba claims 32V but that is pushing it. At 24VDC input I get useful torque up to 720 RPM, which is reasonable considering the cost.

@Michal_Wilhelm_Jany
I use integrated driver ICs because they handle the PWM current limiting for me. Something that is not exactly trivial to implement. Plus deadband is nice, and the TB6560 has a nice sequencer built in too.

@Michal_Wilhelm_Jany how are you controlling the current??

@Bijil_Baji right now, I’m using current source based on transistor, which can be set up to 9 different current by MCU. I thinking also about fast PWM , I will try it this weekend I think

I also have also few other ideas, so I will test it all in next few days and choose best

@Michal_Wilhelm_Jany
You can save yourself the testing and just do it how everyone else does it today with current feedback.

I have it done this way right now… But it is good to know, and practice all other ways we can do it