Originally shared by David Clunie So this is my version of an ant farm.

So this is my version of an ant farm. It took 34 hrs to print finally after a few false starts. Even though it had a raft it warped enough soon on that even cliping down the raft didn’t help and because of it a few cracks show up here and there. I printed at 235 print head, and 115 heated bed with a #makerbot replicator 2x. There are passages ways to each side and each side has tunnels and chambers. Will seal with plexiglass and silicone and a port to their outworld. 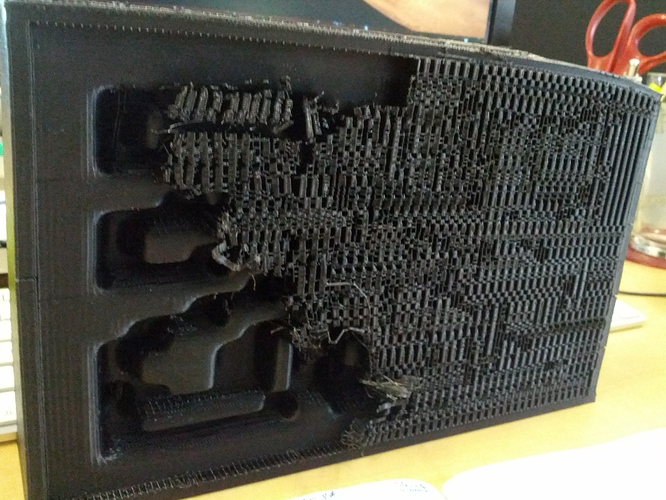 I have a replicator 2x and when i’m using the PLA i’m getting issues where the nozzle clogs on long prints and essentially ‘air prints’ at that point. I’ve tried using the clear maker bot filament, as well as a blue filament that i picked up at the makerfaire. I tried doing what people have suggested placing a fan in the box using a raft, etc for PLA but when i attempted this build I first did it in PLA and it only made it to the raft section before it clogged the nozzle and air printed. I’ve tried 180 degrees print head and even went up to 250 degrees print head. 250 seemed to be a bit better, but each time the nozzle became clogged and the filament would feed through. (this was both before and after swapping out the default extruder with the wpthomas upgrade for the 2x) If you’ve got tips on how to get pla to work that be great. On smaller prints I’ve not had any issue with abs per se, but i seem to fight at times both pla and abs but for different things.

PLA - biodegradable - I wonder if ants (or anything) eats it?

the work still left on this is to use s thin coating of plaster/joint compound and some art sand and pebbles for the interior of the tunnels there is a 1/8 in indent which you can see, all around for placing into a 1/8 piece of glass or plexiglass. I’ll have a hole in the side for an “out port” to the outworld. Also there is a hidden trough that goes down one of the sides and almost all the way through the middle portion which i’ll drill into before i plaster/joint compound so when the joint compound goes over the holes i can fill up with water and then hydrate the nest from the outside. Once i get it all cleaned up i’ll put some more pics here and eventually put up the design on thingiverse or my website. http://www.dbclunie.com

I 've seen up on thingiverse the 5 gal bucket drying “machine” for PLA but I’ve not taken that step yet. I do keep the PLA in zip lock bags when i’m not using them along with the desicant packs that came with them and that came with the abs. The abs i just leave out on my spool holder. I suppose i could dry the packets as they might be max’d out, but i’m in Northern CA so its usually pretty dry here.

Clean your filament, use a damp sponge zip-tied with your filament passing through it as its feeding in to the extruder. I had read elsewhere where people had similar problems and this seemed to fix it oddly enough ABS always seems to be “dirtier” than PLA in these cases.