Oh well… Broke it trying to turn it… 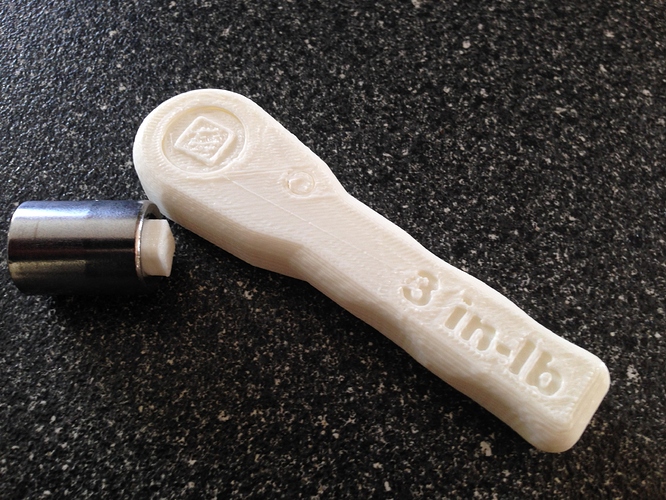 I wonder which material was it designed for?

I’ve printed two in and, can’t quite get the extrusion right yet.

To be fair I did not give it it’s full chance. Printed with PLA at 0.3mm layers but only 25% infill.

As for printing it on it’s side not sure it would work because of the inner gaps.

A better design would be multi parts but would require assembly.

NASA prints with ABS. They used this as experiment in space on ISS not for us on earth.

I figured they’d use PLA from an odor standpoint.

Infill won’t help as much as boosting the wall thickness. I’d want to go at least twice that thick.﻿ It’s probably worth checking your build temperatures too.

I had exactly the same result. I assumed they’d have used ABS (can’t imagine them using PLA, and besides PLA wouldn’t have worked as well with the internal spring mechanism) so that’s what I used and I printed it with 0.1mm layers, but 30% infill because I wasn’t really planning to use it for anything serious. It looked like it was designed to be printed without support (which worked well). The print came out perfect looking, but broke when I tried to free the mechanism. I hammered a very large screwdriver through the back and was able to free the mechanism. I tried to reprint it with 100% infill, but aborted the print when the small spring mechanism came off the bed. Since my extrusion is probably not perfectly dialed in I’ll probably drop down to 80% to give a little excess a place to go. If ABS doesn’t work and I get determined I’ll try it with either Taulman Bridge Nylon or another brand PETG filament.

I printed mine with PLA, .2 layer with 25% infill. It worked perfectly. I printed a second one at 1.5x size and it also worked flawlessly.

@William_Steele could you give us other key slicer settings and temperature. What printer are you using? What was your post print processing procedure? Thank you.

It was printed at 75mm/s with a temperature of 210C on unheated glass (with Aquanet.) My printer is my own design, based on polar coordinates.

Oh, and there was no post processing… it worked right off the printer.

Glued the knob back on with Gorilla glue, let it cure a full day then knocked the back a few times and was able to turn it. It works !

Selector does not work, but still amazing.

Knob seems stronger after gluing it back.