I love taking curb finds and upscaling them. Found this stainless steel flask a few months ago left after a house in the neighborhood had a yard sale. Gently scrapped off the current engraving with a hobby knife and buffed after to remove any scratches. 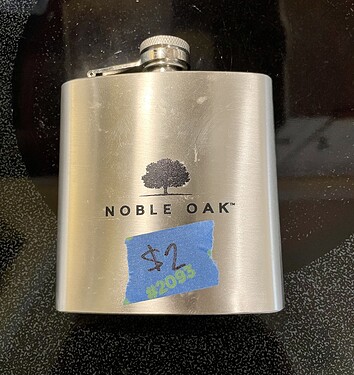 Cut an alignment jig from 2 layers of cardboard. Masked the whole flask to minimize clean up from over spray. Used the laser to cut a window in the masking a little bigger then the engraving area and then coated with Dry Moly Lube. 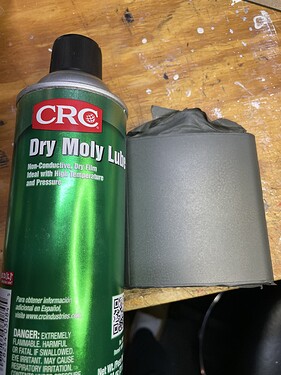 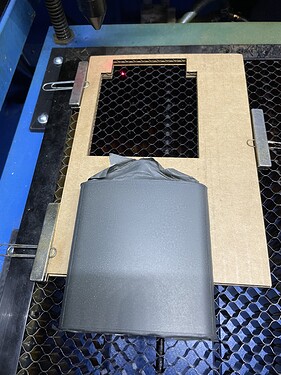 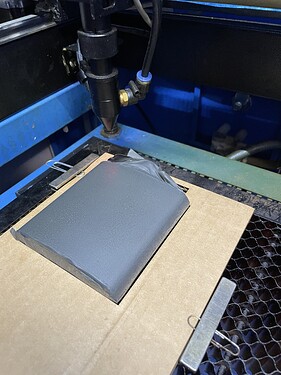 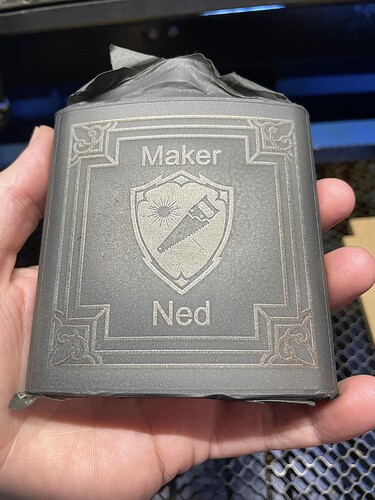 Removed the masking and gently scrubed with a cleaning pad and some paint thinner to remove the excess moly lube. Colored the red of the laser with a fine tip maker and coated the whole thing with a clear coat of gloss spray. 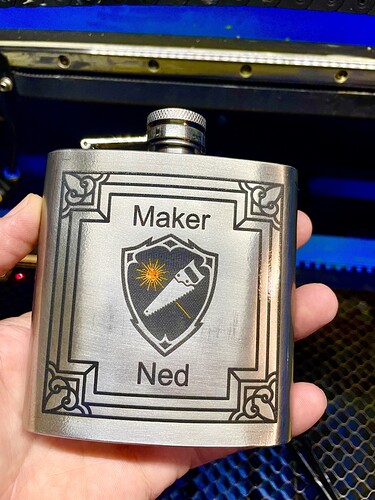 I’ll drink to that!

Pouring it on…Turned out pretty awesome!

You’ll be the toast of the town with that fine work.

Looking at the flask again today, I’ve noticed that the metal has distorted some. In that the engraved portions are now slightly lower then that of the unengraved areas. I can feel it running my finger across the surface and in the distorted light reflections.
This is mainly prominent on the horizontal sides of the frame and the central area where longer durations of laser energy where applied. This probably due to the very poor heat conductivity of stainless steel not letting the heat dissipate easily. First time using moly lube so I guess I used too much power or not enough speed.

I wonder if engraving with Offset-Fill would help limit that kind of heat buildup?

I’ve never used moly lube, but I believe it’s also the basis of Laser bond 100 that I use. It appears to be critical in terms of thickness and power applied… Seems easy to ‘blast’ it off… I run minimum air pressure. 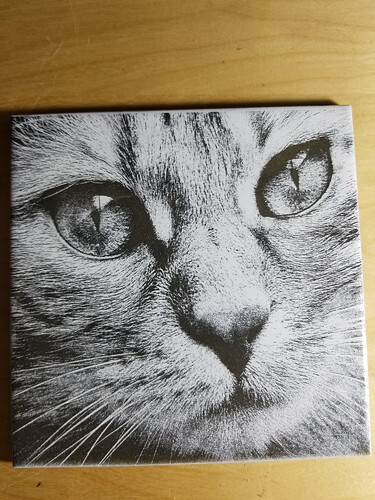 Same stuff, seems to have the same problems no matter what the material is…

I’ve only used the lbt100 with stainless, porcelain tile and glass. Here’s their recommended settings for co2 and glavo lasers…

What other items have you tried moly lube with?

This is actually the first time using Moly lube. Products like lbt100 contain MoS2 but it’s there just as a pigment. Where as with Moly lube you are getting the MoS2 to bond directly with the metal which as I understand it take more energy. I just guessed on the settings to be honest.

I wonder if next time you fill the flask with water to help with absorbing the heat would help.

I thought he wanted more heat…

The problems with lasing metal is, beside reflectivity, is you have a major heat sink.

I would think cooling it would be more problematic as it would help ‘suck’ the heat away.

Well in this case we are breaking chemical bonds to bind the MoS2 to the metal surface. It’s a brief surface interaction with the high intensity of the laser, so as long as the water is about room temp I don’t think it would matter much for the bonding. The water would likely help prevent the build of heat locally which is distorting the metal. I could also try less energy, I was probably using too much any way.

Do you really thing there is enough heat to deform the metal?

If that’s the case, water may help. I grab my stainless mugs off the rotary and they are hardly warmer than room temperature…

with standard Fill engraving there’s lots of heat at the shield center since that’s the area with the most fill. With Offset-Fill the laser traces the outline and works its way inward but that also means the heat is spread about the circumference of the design instead of at the center. And you might be able to break up the engraving into segments which could then be optimized to spread the heat out.

But water might just be the easiest if the heat makes it the the back and into the water fast enough.

Do you really thing there is enough heat to deform the metal?

It did deform with the engraved area becoming lower then the unengraved area. It was actually a bit surprising to me, which is why I mentioned it.
I’m guessing that the metal may have been under some tension and the heat relaxed it.