Anyone know what is it’s optical output is? 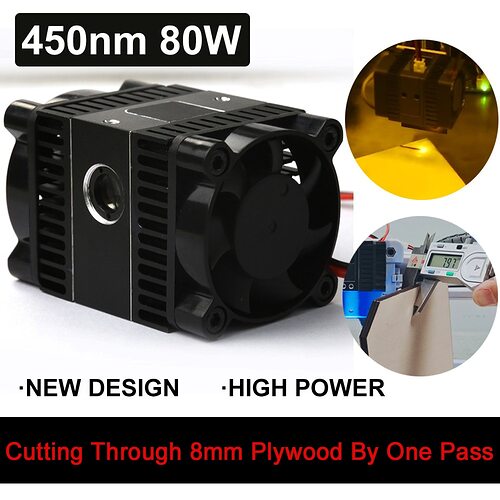 it is listed right on the Specifications section of the link you provided…
Optical Output Power: 80W

believing it is another story. 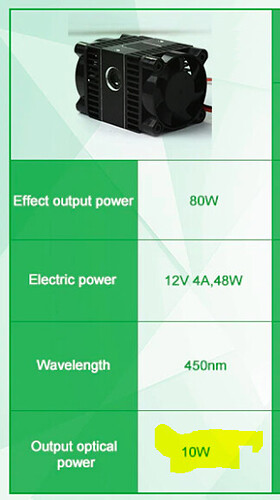 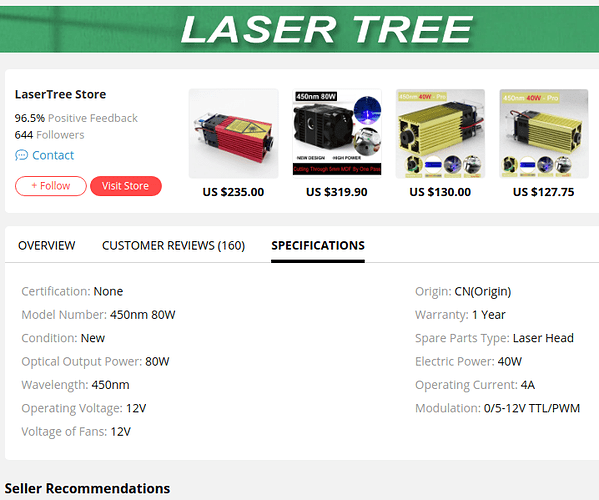 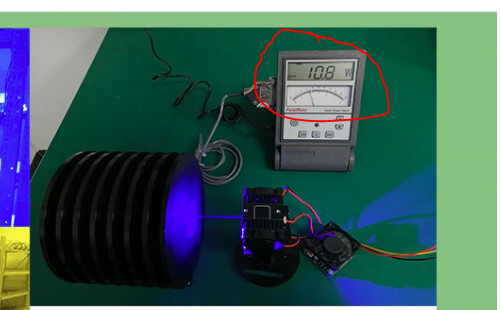 Heh and they provide a power measurement. 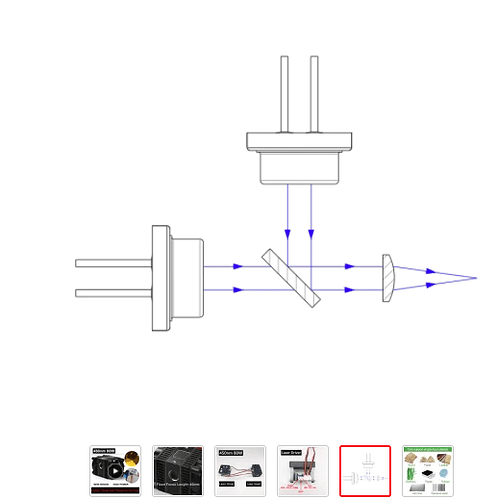 I’d missed the power measuring pic but say that diagram of how they attain the high power output.
If they use good optics it’s a nice setup if they also have the thermals taken care of too.

I wonder if they rotated the diodes 90 deg to each other or try to align the oval diode output. I’m not a fan of how the diodes etch or cut tighter lines along one axis than the other axis. Better for rastering when you plan for it but vectors can look funny because of the oval ‘dot’.

They have a graphic claimiung a square dot and that it is due to “FAC” but I didn’t see where they spelled that out.

Thx, I see that they spec’ed it having a balanced dot shape. I’m guessing the FAC is the combiner lens. Looking to be an impressive laser diode package.

In the text “Effect output power”, I think they are trying to say it has the same impact on materials as an 80 watt laser. Boy who are they trying to con with that statement?

Maybe because theirs is “focused to 0.08mm rather than 0.3mm” or some other nonsense.

It’s in the small print, but they claim 40W equivalent intensity, not total power. The whole point is that the optics in these modules are very good, they claim a beam intensity at the focus that matches a 40W CO2 module. I believe them.

I have the 40W pro (FAC optics) blue light module from the same folks (laserTree), it cost 95 Euros total, and arrived in 6 days to the Netherlands… It is mounted in a 5040 elksmaker clone rig and It cut the following in less than an hour, it also cut the 3mm ply backplate (another hour…) 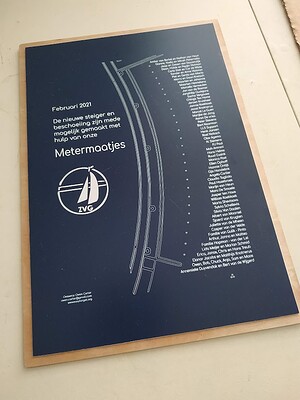 My comparison is that I have used a 5W blue light module for several years but I upgraded a few months ago. The 40W module is considerably more effective. This is obvious to me when working with the same materials on the new module, the improvement is stark.

So; While I hanker for a proper 100W CO2 IR laser (it’s in my bucket list) I’m still able to do excellent work with a system that, frankly, cost less than many people pay just for shipping their CO2 units.

With decent air assist it will cut plywood, I’ve done 5mm ply in extremis, I regularly do 2mm model ply cuts in 2 passes with minimal scoring. By ‘decent air assist’ I mean a high-pressure/flow pond airpump and a small nozzle right above the focus. I don’t have a good photo of this so here is the render of the part I designed and printed: 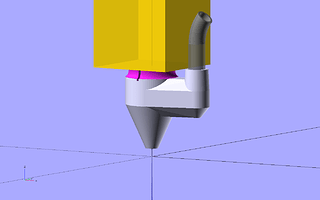 Having, and using z axis adjustment is a must, the module it cuts very well at the focus but is hopeless if it is off by even a few mm., so you need to get it keyed perfectly, and lower it between passes when cutting. Conversely; moving out of the focus a bit makes for better engraving (the focus is too tight, it’s impossible to avoid scan lines if you engrave at it).

For reference, my 4 year old K40 CO2 laser with all stock parts and max output set at 18mA, I cut 3mm plywood in one pass at 12mm/s 65% power. Do the math as to how long it would take to cut out that frame by measuring the perimeter in mm and divide by 12 and that’s how many seconds it would take.

The lengths these diode laser vendors are going to fool the public is amazing.

Well, I am not being fooled; I have a degree in cybernetics and have, on a very tight budget, built a machine that matches my hobby needs perfectly and produces truly excellent results; speed is not my only metric for success.

The manufacturers headline claims are outrageous, of course, but that’s something called ‘Advertising’; to see further examples of people exaggerating outrageously about their products just turn on your TV and wait five minutes.

Diode lasers have valid uses, but everyone but Easytarget should be aware of too many of the diode laser vendors exaggerating their specs.

@clolsonus were you ever able to get your diode laser cutting balsa well enough? Looks like this might be an interesting intermediate option between the weak performance you were seeing and moving to CO2!

everyone but Easytarget should be aware of too many of the diode laser vendors exaggerating their specs.

Immediately after I wrote:

The manufacturers headline claims are outrageous, of course,

Once I’d finished giggling It got me thinking about lots of stuff, This response is tediously long, but I thank you at least, for getting me to think about this

Personally I’m going for ‘good’ and ‘cheap’. Other people will choose differently, of course, depending on their skills and priorities.

Given these similar values I don’t think that claiming 40W beam intensity equivalence is particularly deceptive, and the so-called spec sheet they post seems pretty accurate regarding the electrical characteristics. As for the rest of the advert, yes they are exaggerating a lot, but so was the beer commercial I just saw (apparently it’s guaranteed to get me laid…) and the toothpaste advert before that (same promise). I can ignore it.

Some Practical experience with a 40W equivalent diode laser module: 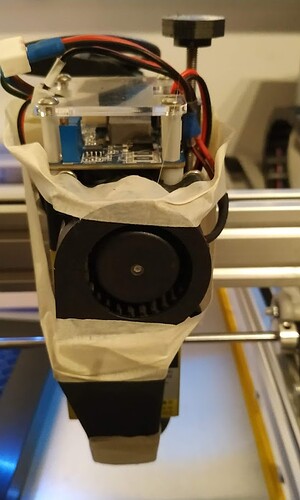 The main engraving was done with 4 raster passes (X, Y then the 2 diagonals) at 35mm/s, using 80% power, 0.1mm pass width and fast travel in whitespace. It took just under an hr to run that as a single job, the results are shockingly detailed and good. The material is from the Rowmark Duets range.

It then took me ~40 passes at 30mm/s to cut the 3mm backplate from some spare marine ply, lowering 1mm every 10 passes, I guess that job took an hour or so of my time in total. I remember making several cups of tea in between passes, and deciding that I needed to get serious about the air assist 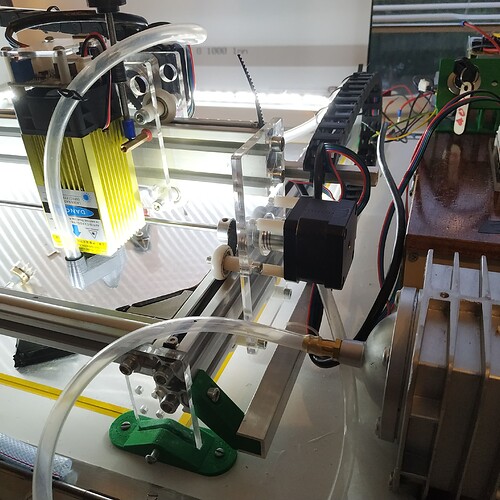 With this set-up and focussed it cuts 2mm ply in 2 passes at 12.5mm/s. The only reason it needs 2 passes is so that the focus can be moved down for the second pass. The first pass does most of the heavy work, the second pass clears and separates the cut.

I haven’t really tried any other materials with this setup because my 2nd hand ATX PSU went south. A new PSU is being sourced.

Once it is running again I’ll endeavour to do some proper tests and post results in a new thread here.
In the meantime I hope that some of the info above is useful to people stumbling across this thread.

(*) I believe there is a 6W diode in my unit; it draws 0.14A when powered up with beam off (mostly the fan), and draws 1.32A when the beam is full on. Supply is 12V so that’s approx 14W of additional power being consumed for the laser. I’m happy to assume that half of that is getting lost in the driver. So a 6W diode seems like a good assumption, with an option on 7W.
The beam is actually perfectly square (not oblong, like the 5W module it replaced), I didn’t try to account for this in the maths above.

(**) IR lasers cut the translucent glue in cheap plywood much better than blue light ones do. If all you want to do is cut plywood boxes, cuckoo clocks and marble machines than this might be a killer argument.