I use JScut to make the Gcode and send it through chilipeppr. Quite a lot of times my head just stops and sits in the middle of a cut. I start from the center of the design so I can’t restart it as far as I know either. Someone did mention picking a spot in the path before it stopped and start it there to finish the design but I don’t know how. I’m thinking maybe my design is too many “lines” and that’s why it stops? Any help will be very much appreciated, I have a large investment in carbon fiber and I can’t afford not to turn it in to products or waste it with partial cuts. Thank you.

Hmm. Historically JSCut would generate very large Gcode files, which did create problems for folks sending them to their CNC board (tinyg or grbl) where the tiny little gcode movements barely moved the spindle head and things would just run dog slow. The general suggestion was to use Fusion360 instead to generate all of your Gcode paths. Fusion360 is still free to hobbyists despite them making it kinda hard to choose that option on their website.

I have no idea what your machine is, I assume it’s a type of CNC machine. Anyway I did have a problem a while ago with my machine stopping as if it had run out of steam. I always start my machine at a homed position X0 Y0 so that if it does get stuck, I can go back to a home position and start again. What my problem was my controlling computer was running out of memory and once it had got to that stage, it couldn’t recover. I fitted a larger SSD disc and added extra RAM and that seemed to work for me. I also got rid of all the dross that was running in the background. I use Mach3 but I have no idea what the advantages would be over chilipeppr, not one I have come across.

The OX is a general CNC router family of designs based on OpenBuilds hardware.

@Brandon_Satterfield used to run a business that among other things included selling kits for building the OX, and before he closed up shop he sold controllers that embedded a raspberry pi for running the sender, and a MKS DLC 2.0 controller running grbl for hardware control, so at least some people have that specific combination.

Beyond that, it’s pretty common to be running an OX from a board running some flavor of grbl on an 8-bit controller (same type of CPU as the original Arduino).

For folks who don’t want to use Fusion360 for any reason, there are other options. For example, FreeCAD is open source and toolpathing is one of its strengths. Linux Weekly News ran an article that highlighted open source options in CNC recently. It was by no means complete; more of a sampling, but might be useful to you here. I wrote a comment there:

The Arduino control boards are getting “long in the tooth” — there are limitations inherent in limited memory and 8-bit processing, which for most people become evident when attempting to cut smooth arcs. 32-bit boards are now available at roughly equivalent cost.

This might be relevant to the problem of handling lots of small movements. To make minimal changes to a machine setup, @cprezzi’s grbl-LPC would let you use the same $$ configuration but give you a faster processor with more memory and higher resolution in math and maybe less likely to stall; might be easier than converting to a completely different firmware and starting over on configuration. I don’t know whether grblHAL enables additional boards (those with pin mappings incompatible with grbl-LPC) or not. It has a fairly impressive set of hardware support so far.

I have the same problem with my OX machine. It just stops for no reason. I start from the middle of the design so if it stops I’m screwed and time and material is wasted. How do I start from a home position like you said? Someone mentioned telling it go to a point in the path in the software so the head will go there and start from that point and continue. I don’t know if that’s possible. Please help! I’ve thought maybe my G codes are too big so I recently thought I might cut some of the design and let it home to the center, move it down to the surface again and cut the next part and then do it’s again to cut the outside. I look forward to any response.

Don’t forget the grbl_ESP32 boards and firmware from Bart Dring

A port of Grbl CNC Firmware for ESP32. Contribute to bdring/Grbl_Esp32 development by creating an account on GitHub. 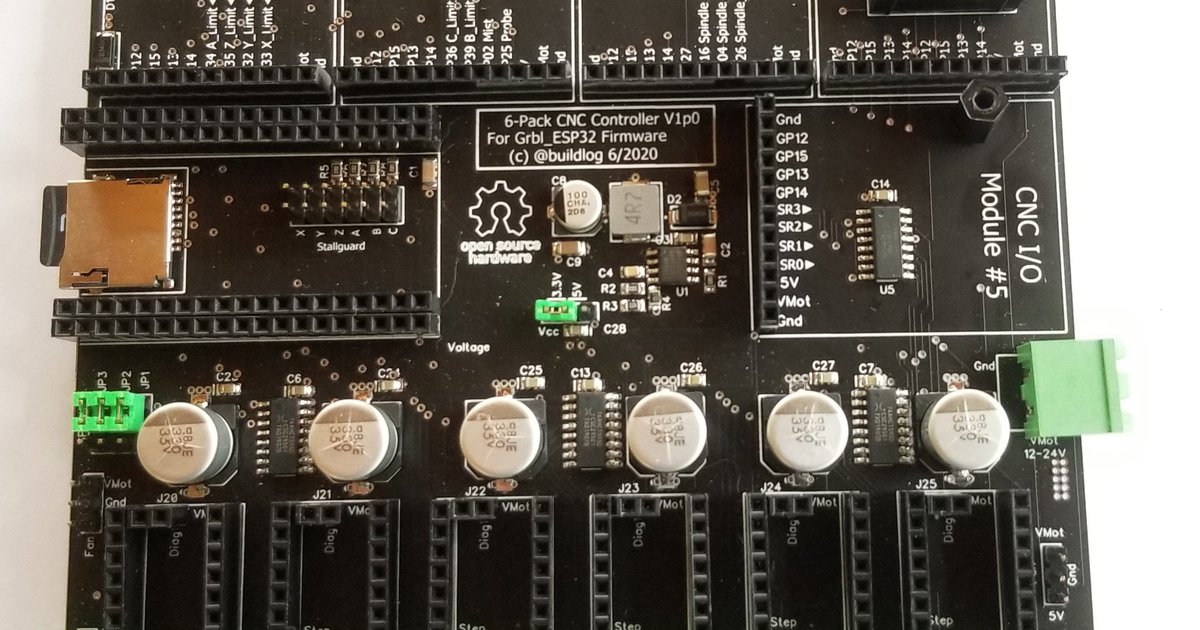 @cprezzi Good thought! I actually own some of his earlier boards but haven’t swapped them back in for the MKS DLC 2 I currently have in the OX.

(When I first assembled my OX, Bart was on vacation and not shipping, and I hacked something together on perfboard to try to get up and running quickly, and my stepper drivers missed steps on my horrible hack. I swapped “temporarily” to the MKS DLC 2 to get cutting, and with the 5V MKS DLC 2 it quit skipping steps. I keep meaning to go back and try his board, and then I keep prioritizing something else…)

@BantamEngineering have you set up limit switches?