More reliefs. This is about as large I as I can get in one

More reliefs. This is about as large I as I can get in one cut with Chilipeppr.

I would love to do this at least twice this size so I can flip it and mill the other side to make it 3d. 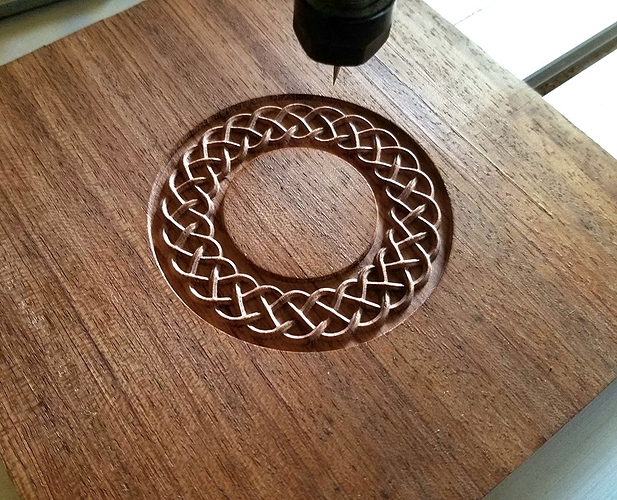 Steve, your work looks great! What end mills are you using?

Is the size limit a problem with memory? In which case is the position improved with turning off the 3d viewer?

Yes, memory, fails to load. Turning of the viewer does not help. It’s very easy to reproduce if you do any relief work because the the files grow by the square of the size. I seem to be the only person using Chilipeppr for 2.5D and my plan was to move to 3D after I got to where my control of reliefs was less error prone. I love it but cannot do the larger work because of the very significant limitation on an otherwise amazing tool for artists.

Found a workaround that is not bad at all. Since I am using gray scale bitmaps in ArtCAM it can mill 2.5d within any vector so I can simple divide it into separate files and run them successively. This is much easier than importing a 3d file and cutting a part of it to get a relief. YEAH! I can use Chilipeppr for a bigger piece. It’s running a test of this right now and looks great, so far. I’m scaling on up…

Yes - Goode file size limit is my main problem with chilipeppr. I have run into this many times when I attempt trochodial milling.

Thank you Matt. What are you using to create the trochodial tool paths? This was new to me but it makes so much sense.

@Steve_Anken impressive work. What version of Artcam are you using?

I use EstlCam for the trochodial G-code.

Stephan I am just using the express version from 2015, dongle version.