Thought I would update the forum on the MOBeam build I worked on most of last week and this weekend. I have not completed detailed blog posts because there are still some details open loop.

I have completed implementing a few concepts that I had in mind.
Caution I have not completed testing these implementations.

MObeam is intended to be a shop tool like a router or jigsaw. To that end, I focused on its mobility with the ability to engrave on finished woodworks of various types and sizes including vessels turned on my wood lathe. I traded off automation for simplicity and at the expense of more manual adjustments.

A fundamental concept was to leave the laser diode module at a fixed focus and instead move the entire assembly up-down as needed to get the target in focus. Sound crazy?
The laser focus is set at 30mm [G8 lens] up from the bottom surface of the base plate. The entire assy or alternately just the movable bed is then adjusted up/down based on the thickness of the target. In a way setting up MObeam is similar to setting the bit depth on a wood router. 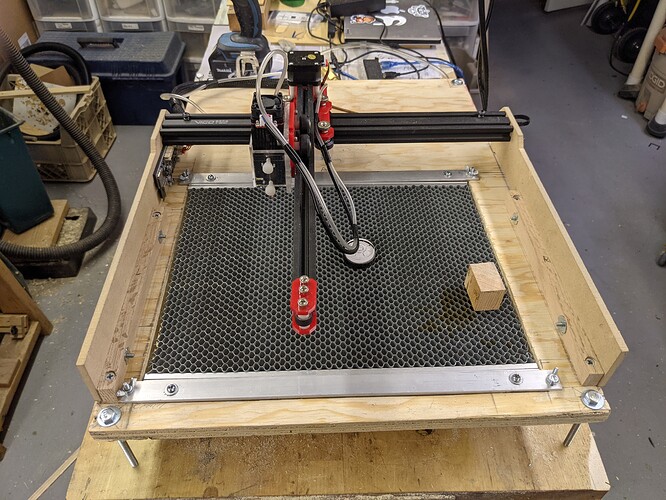 The laser module gantry assembly is mounted on a piece of 3/4" plywood into which an opening is cut. This opening is left open or alternately accommodates a moveable cutting bed [one I bought for my K40 and never used]. The entire assemblies distance the surface is adjustable with 4 1/4-20 bolts

Very thick or odd shaped targets:
When left open the target is placed on the bench under MObeam and the entire assy is adjusted up/down with 4 legs until the target is parallel to the bottom of the base plate. 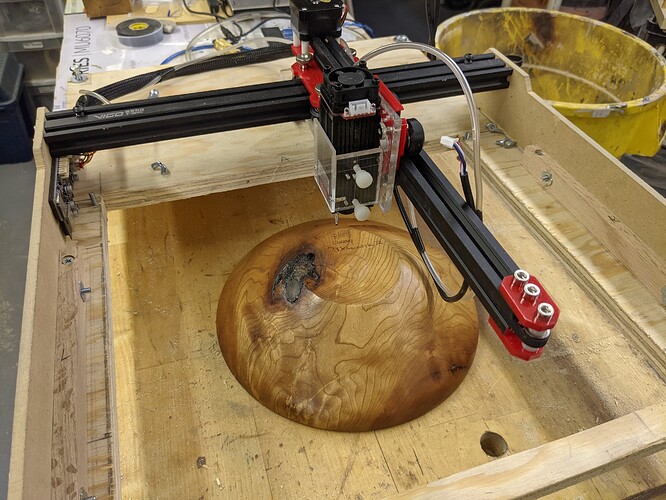 Small Flat Targets That Fit on the Cutting Bed
When the cutting bed is used it is mounted in the opening and 4 screws allow it to be adjusted until the target’s [laying on the bed] surface is parallel with the bottom of the base. The assy is mounted into the base plate with 4 thumbscrews. Adjustments are made with a 30mm gauge block. 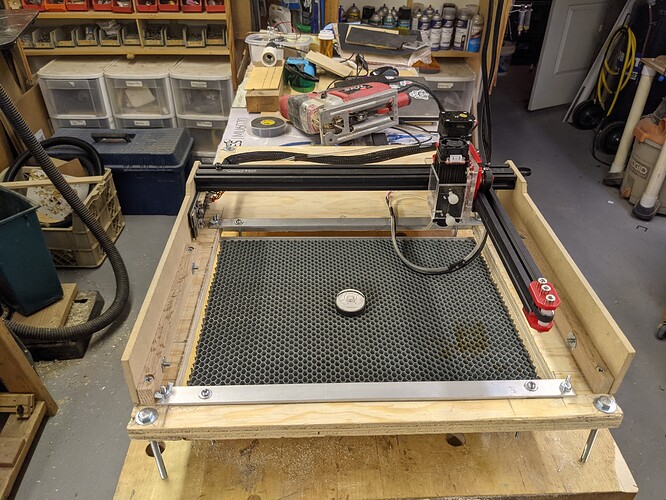 Large Flat Work
If a larger flat material needs to be engraved [front of a chest] the gantry assy can be dismounted from the baseplate with 4 [thumb] screws removed from the side plates. 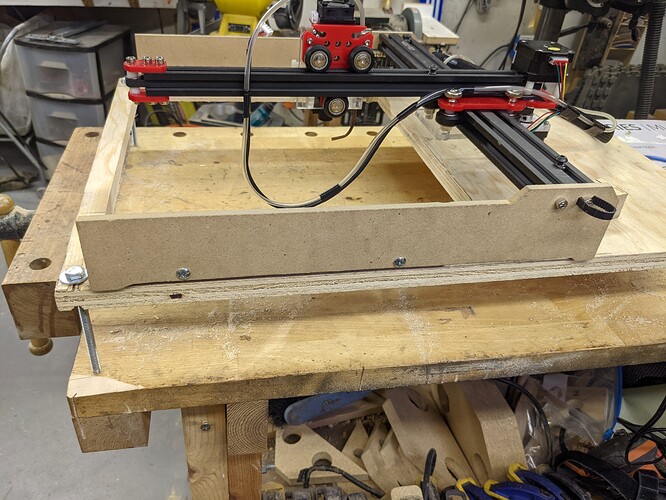 The gantry assy is placed flat on top of the target and no additional adjustment is needed. 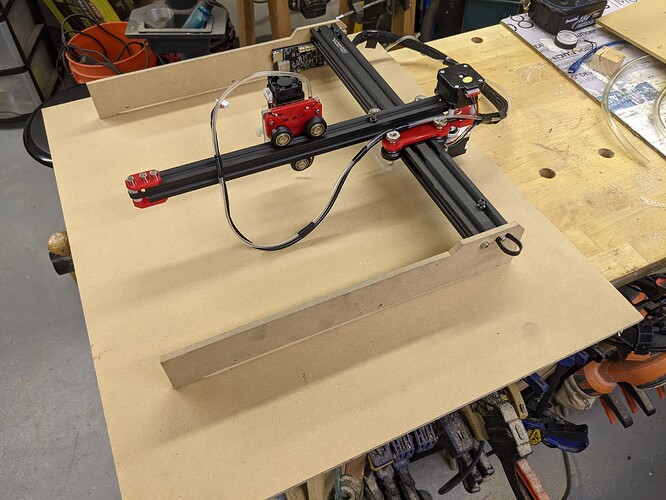 Cheap Height Adjustments
Depth adjustments are done with a battery-powered drill and a gauge [not shown] that is the thickness of the base plate.

Laser Module Adjustments
The only time the module needs adjusting is if the lens is changed and then it is simply aligned to the bottom of the base plate. 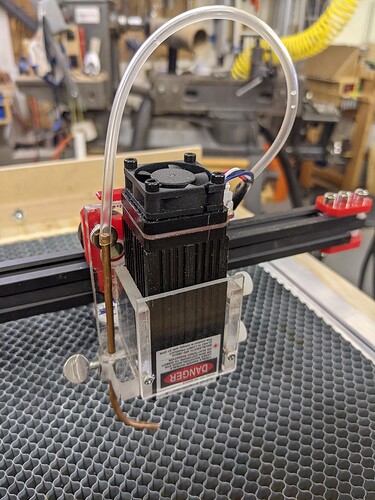 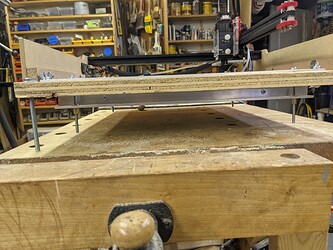 Detailed views of the bed adjustment mechanism.
Yes I know, I cringed when I started this design …
However this assy worked better than I expected. Then again I took a lot of care to ensure the holding bracket and the bed mounts were perfectly aligned. The adjustments [one screw at a time] were not as clunky and painstaking as I thought and it did not bind until I adjusted only one screw a ridiculous amount relative to the others. 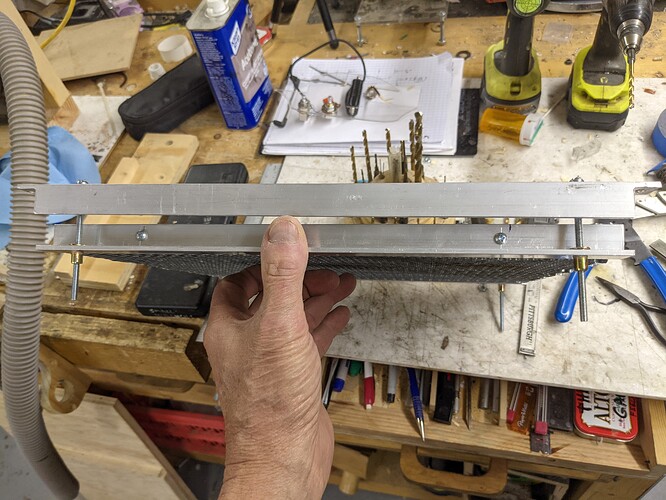 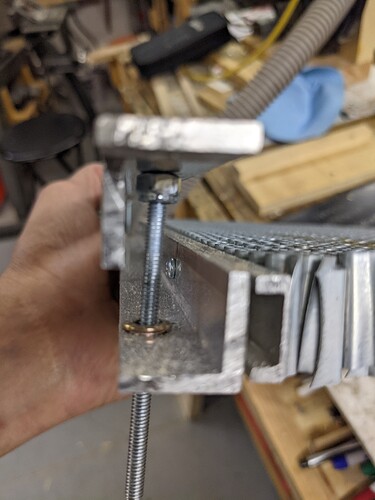 Known Improvements/Adds & Before You Ask

Overall pretty nice. Personally I would have made a thumb screw adjustment for the laser head height for minor adjustments instead of having to adjust legs or shim the item to be lasered.

This is a project I have on the back burner but still have not done. I have some ideas to make the gantry. I want it to be simple and easy. I would only have probably a 24" x 24" laser area.

Personally, I would have made a thumb screw adjustment for the laser head height for minor adjustments instead of having to adjust legs or shim the item to be lasered.

that said I am thinking of simplifying the mount with this bracket.

I do not anticipate any head adjustment nor the need for shimming given the multiple ways the target can placed and its depth adjusted. In fact, eliminating shimming was one of my goals

Also, the DOF on the G8 lens is relatively long [havent finished an empirical measurement] and this will help render small deviations in-depth immaterial