MKS MINI12864 panel on my smoothieware compatible board.

MKS MINI12864 panel on my smoothieware compatible board. LCD on panel is viki2 compatible but pinout on ext1 and ext2 is strange.

Both connectors are mirrored according to “standard” GLCD, LCD and SD shares SPI pins. But it works… 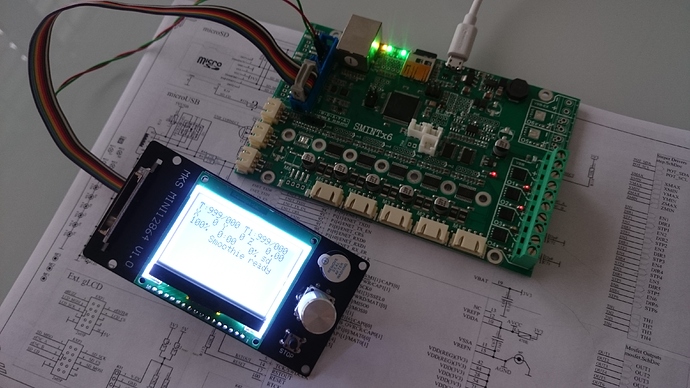 Is that board open-source ?

Is the source somewhere ?

http://in-lights.com/SMINTx6/
Site is still “under construction”

But everything about board will be there.

And what will the license be ?

But for sure this is a thing to discus.
I can provide schematics, PCB layout, even gerbers,…
http://unlicense.org/

Well Smoothieboard is CERN OHL so I think it’d make sense if this were too.

Are you running the MCP4451 digipots like on the smoothieboard?

Yes, you can set current in config file.

Any eta when the source files will be up? Looks like a great little board!

@Bray_pp I have been trying to get the MKS MINI12864 to work with a smoothie board for a while. Could you share the pin configuration and how you set up your config,txt file? That would be supper awesome.