Melted my battery pack, but unsure how

Hi All,
I managed to melt my battery pack and not totally sure how, so was wondering if anyone could point me in the direction of what I might have done to cause it. I’m pretty new to the hardware side of things, so I’ll explain the path I took to get to the pack melting, and you may spot other issues I created.

I have an L298n hooked up to a couple of TT DC motors, a pico powered from a 5v usb, and 4 AA duracell batteries powering the motor controller from a separate battery pack (The one that melted).
I had been playing around with this setup for a while with no problem so decided to add a couple of photo-interrupter sensors to try controlling the speeds of the motors based on some error correcting after following this guide - https://projects.raspberrypi.org/en/projects/robotPID/7

At this point I had tested the motors could spin both directions etc, and controlling the speed through the pwm pins was working so I’m pretty sure all of the wiring there was working out. I had even tested that the photo interrupter sensors were working manually without being attached to the motor and values were being passed through pretty well. So I hooked up the code to control the speed of the motor based on the error correction code from that guide, and let it run.

So this next part is what I’m guessing caused the pack to melt, but I’m not sure if how I went about it was just dumb, or if something else caused it, or both.
This is where I realised I had forgotten to put the batteries into the pack, so while the pico was powered and the program running, i started putting the batteries one by one into the battery pack (I had done this many times before with no issue, was this just lucky?), and where usually there was a light on the motor controller after putting in the 4th, there was none this time.
So I pick up the battery pack again to check the batteries are all in properly, and felt a fair amount of heat coming off the pack, and then noticed the springs starting to melt through the plastic, fairly quickly too.

This is where I quickly unplugged everything to try and find out what happened, but cant really tell what I messed up here haha.

Is it possible for me to tell the motors to draw too much power from batteries based on the program running or anything like that and managed to do this while trying to control the speed? Or is this a case that I’ve crossed some wires somehwere and sent a load of power back into the battery pack or something?

After looking over the driver a little more, I spotted a wire that had melted into the plastic between the VCC and GND terminals -

Could this have caused the problem?

I"m guessing you also didn’t see or hear any motor movement as you inserted the 4th battery.
Yes, shorting out the battery pack leads will melt things. So now you learned to ALWAYS look very closely when inserting Pos and Neg leads into wire terminals when they are side-by-side. It is one reason why, when using power supplies with 3 pos term and 3 neg terminals I will always use the ones away from the 2 opposite terminals which are side-by-side.

Yup, that’s a short circuit! Those batteries have the ability to provide a lot of current. You might want to add a fuse of some sort to your battery pack!

Here’s the kit that I bought:

Those metal ferrules go around the stranded wire, and there’s colored plastic insulation at the end that helps a little with strain relief. Then the ferrule is crimped to a square shape that’s easy for those terminals to get a good connection with, and which avoids stray wires touching from one terminal to the next.

Aye no movement at all, just a lot of heat from the pack all of a sudden aha. Cheers for the tip too, I’ll keep that in mind when I come across terminals like that!

I’m pretty sure most of us have been caught by this type of thing at some point in time.

Ahhh perfect! Once I saw it was just a stray wire that caused it I was wondering if something like that existed to add onto these bare wire ends.

They look very similar to the ends of breadboard wires and the like, is that essentially what these ferrules do to the end of the wire?

On the topic of fuses too, I’m fairly new to putting this kind of stuff together and kind of winging it as I go lol, is there anything you could point me towards for adding something like that to a battery pack, even just the name of a particular fuse to use would likely be enough to get me going in the right direction

. I didn’t expect things to melt so rapidly, so I was going to look for some battery holder that have some of those kinds of things already fitted too or something, but would love to put one together myself too.

Breadboard wires are made a little different. Once you squish a ferrule it is no longer round, and they are larger than the wires going into breadboards.

You can get inline fuses. I bought a few dozen some years ago for very cheap.

For higher current limits only, you can get use blade fuses, here’s something similar:

There are lots of kits like this at varying costs with varying current fuses and varying counts, and you don’t have to get them from Amazon.

Legend, cheers for all the help! 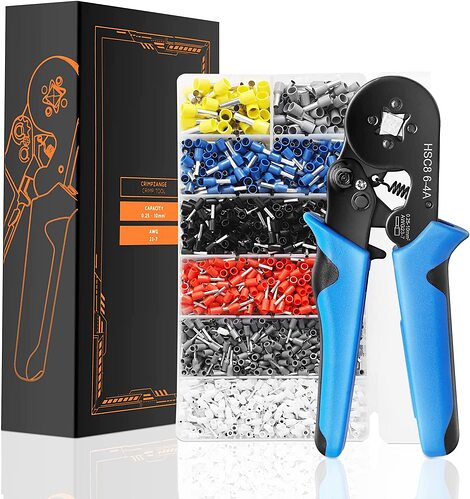