Hi folks. I’m working on a project in which it would be nice to be able to print on some stainless steel with my diode laser. There is a spray available which I know works - called Cermark - but it is INSANELY expensive - £70 for a small spray can. Many seem to think (and state, authorititively) that a major active ingredient is Molybdenum DiSulphate/Disulphide, but my own readings lead me to think this is actually Molybdenum TriOxide (M03).
Are there any chemists or industrial espionage practitioners out there who can contribute? The best lead I have is that MO3 (2 parts) + ZnO (one part), in solution with denatured alcohol or Isopropanol is close to the magic formula…but Chemistry was always my worst subject and I’d make a terrible spy…

PS - the company who make Cermark are in business to make money (although there is quite a backstory involved, involving the original inventor) and I have no wish to criticise or interfere. No doubt that their liquid does the job and, in environments where time is lots of money, the price is probably justifiable. I’m a hobbyist, though, like many millions of others, and it is out of sensible reach for such as us, so using what info I can muster to attempt a cheap alternative causes me no moral qualms

PS - Dry ‘Moly’ spray DOES work on stainless reasonably and it is my fallback. It is useless on other metals, though - I tried many - with a diode laser.

You may want to check out this thread:

Yes you can use powder coating in a laser! Laser Engravers/Cutters

[Powder Coating With Lasers..Kinda | A New Way To Fill Your Engraving With Vibrant Color]

Looks good but I don’t like having to remove the workpiece halfway through to apply the powder - much opportunity to screw up methinks.
Plus he does say it won’t work with metal at all…oops

Yes, possibly not the best example. But if you can get powder coating to stay on the material then a low power diode laser works well since it heats the powder instead of vaporising it… Check out this article

The technique there still requires playing around with an electrostatic powder coat and then baking off, but it looks like the results are really good. It’s something I vaguely want to try, maybe by mixing the powder with oil or some other medium to get a consistent surface without needing the electrostatic kit.

More broadly, I agree with you that It would be great if there was a reliable and affordable alternative to the current marking products. I’ve had some success directly marking stainless and anodised aluminium with my tightly focused diode laser, but something more universal that can work on ordinary steel would be nice to find.

has me wondering if acid etching first using a laser cut design on some thick tape would provide the surface for the powdercoat(or laser printer fill) to adhere to. And you only need the electro static aspects if you are looking to hang pieces vertically in an oven. For flat laser work you don’t need anything but the powder and a very shallow surface to hold the powder(usually the depth of the engraved wood is enough). On metal, a few layers of tape, then laser cut and the design peeled out to leave a shallow cavity for the powder might be enough.

what info I can muster

Maybe you could muster some mustard!? 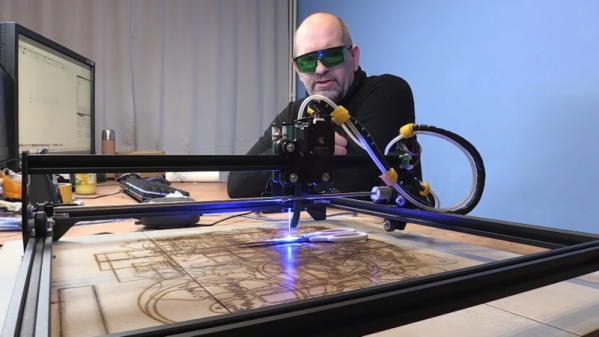 I’ve seen this article referenced in this forum and others with success.

Are there any chemists or industrial espionage practitioners out there who can contribute?

Not sure if this works with a diode laser or not.

Now, it turns out that you can also get Molybdenum Disulphide to bind directly to metal with high heat, which is why the dry moly spray works. It’s not going to have as high of a pigment density so it’s usually not as dark as Cermark.

With the mustard it’s likely the isothiocyanates in mustard are forming a metal sulfide on the surface with the high heat of the laser.

Post this in the believe it or not category! You can etch stainless steel External Links

Interesting. He’s using a 5W blue laser so I’m not sure how well it would work with a higher power CO2 laser since they have different wavelengths. If it is the isothiocyanates, as he speculates, you could always try mustard oil which is distilled allyl isothiocyanate from mustard seed. May need to add some vinegar to acidify it some. Probably forming a metal sulphide on the surface.

Edit: Note, using straight mustard oil may not be advisable for respiratory reasons.

I can’t hit the LIKE button enough on that great explanation of what Cermark is and how it works. Thanks!

I’ve used my K40 for a multitude of projects, wood, perspex, rubber stamps, paper and cardboard. I stumbled across a YouTube article about using mustard to etch onto stainless steel. I tried it an thought I’d been caught out with an April fool joke. However further research seemed to indicate it was possible with something called dry moly lube. As the article was American I thought I had no hope of getting it in the UK. However RS components sell it for around £15 a can - (CRC Lubricant Molybden…

I use molylube from RS components (UK). Works well and is quite long lasting.

Just got a diode laser and not tried it with that yet, but I did try a black marker pen to cover the ss then use the diode to etch. That worked ok. A bit faint but quite permanent…

Also there is a guy called the Louisiana hobby guy on YouTube. Check out his vids. Lots of good info.

I recall a similar product to cermark that I used almost 20 years ago with CO2 on stainless housings after deep-drawing.
The marks were very durable, and bonded with the metal beyond just the surface.
I talked a bit with the manufacturer, and it was a glass and glass-flux mix, along with some metallic oxides. I seem to remember something about iron and others. Water rinse for the un-marked residue. There could have been MoS2 in it.
Color was almost black, and I remember being able to sharpen blades on the marks, so there likely was a ceramic or carbide as constituents. SiC would make sense as it is a good broad-band absorber.
Under the microscope after marking, it appeared to be just that, glass particles partly wetting the metal surface and the dark particles.

Thought I’d try it out with my diode laser this morning. I gave on old bbq spatula 2 coats of dry moly. Allow to dry in between. I have a sculpfun S9 diode laser and I have light burn. I set the fill for 90% power at 500mm/min.
As you can see it seems to work OK. I clean off with methylated spirits. Its dark enough, more of a dark gray than black. Ignore the other marks they are old marks. 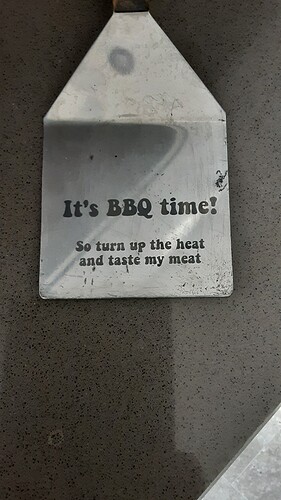