As promised, I’ve written a summary of my experiences building a budget laser engraving machine for the benefit of members.

I decided a while back to add to my maker device collection. I already have a CR-10 3D printer and a few other toys, but I was interested in either a CNC router or a laser cutter/engraver.

I did a spot of research and found that laser cutters are basically either CO2 or Fibre and require too much space for my small workroom. I settled on a diode laser engraving machine, with the idea that I might use the knowledge gained to build a CNC router using the same or similar kit at a later date.

My first purchase was a frame/chassis for the engraver. I searched eBay, Amazon etc and came across something promising. Amazon had an LG-3 frame, with no laser or controller, for about £40. This was cheap enough for me to take the risk and buy it, so I did. It came from China and was here within 10 days. The instructions were pretty terrible, but assembling the unit was not a particularly difficult task and, after studying the parts for a while it was pretty obvious how to proceed. This I did and within 30mins I had the thing assembled. I couldn’t do anything with it, of course, having no end-tool. The frame looked (and looks) pretty reasonable. It is built from extruded aluminium rails – like many or most similar units. It has 3 Nema 17 steppers and a basic timing-belt drive system for the X and Y axes (two Y drives and one X drive). It also came with an unexpected bonus – a controller card, capable of driving a laser or router. The advert specifically said that no card was included, so this was unexpected bounty. 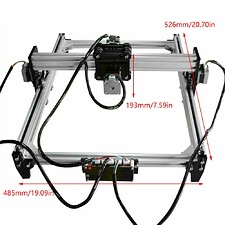 Next I needed to get a suitable diode laser head. After consulting here and checking sources, I finally decided on a ‘40W’ laser from China (via AliExpress). Members will know that the headline figure is NOT the actual laser power with diode lasers. Informed sources tell me that diodes can generate about 7-10 W max. This unit claims 10W ‘optical power’ which is probably about right. The unit arrived in 8 days, and I quickly set about installing it. This was simple – the unit came with an adjustable carrier which simply bolted to the plate on the X-axis carrier. It was then plugged into the bonus controller card, and the setup was done. 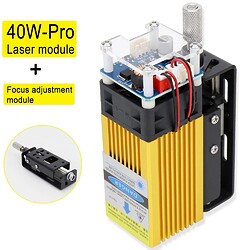 I fired up the unit, using software described in the documentation and downloaded from the manufacturer’s website (a product called VigoWorks). The unit sprang into life and behaved as I expected, apart from needing to have the direction of the Y-axis motors changed (a simple check-box in the software). The supplied card was basically an Arduino Nano with 2 A1988 stepper driver chips. I quickly loaded an image and tried to engrave it on some spare plywood I had. It worked pretty well first time. I then tried to cut the same plywood (3mm) and found that it did it with 3 passes at low speed (200mm/m). 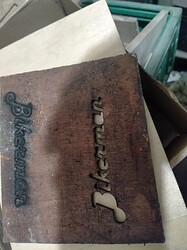 Now that I knew it worked it was time to step back and consider the next move. It was immediately clear to me that air assist was needed, and fortunately I had a suitable pump available. I then used the needle from the syringe of a printer ink-refill kit, and a length of 8mm PVC tubing to improvise something which could be cable-tied to the laser unit.

I also needed a power supply (to this point it was simply connected my bench supply) – but here again I have a box full of PSUs from various kit, so no major problem. After more consultation on these forums, I decided not to connect the air-assist to the controller, deciding instead to have a simple toggle-switch, with the pump connected directly to the chosen 12V PSU powering the unit (I settled on a 20A 12V supply from an old desktop computer).

At this point I had my first setback – the controller card just stopped working. Fortunately, the Nano and 2 driver chips are socketed, so I quickly stuck a new Nano into the board, uploaded the firmware (using the supplied VigoWorks which makes this simple) and was back in business…. for a while. 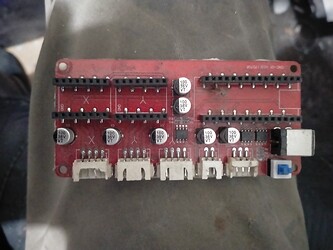 A couple of days later the card failed again. This time there was clear scorching on the PCB and it seemed to me that one of the A1988s had received a nasty jolt in a place it didn’t want it. It could have been careless handling, bad design or an act of God…no use wasting time on autopsies. Fortunately, again I had a spare controller for my CR-10. (The original Creality card failed about a month after I got the printer – the printer would get to temperature and simply keep heating until powered off, so I got a replacement card).

Also, fortunately I had spent a spare hour examining the duff card and found that one of the big caps on the board had simply become detached on one pin. A quick dab with the iron and the card was restored to health. I therefore determined to use this to drive the engraver. This was easier than I anticipated. The procedure was basically as follows: 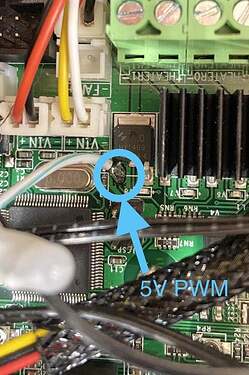 This all went without a hitch, but the card would not work with either VigoWorks or LightBurn (I downloaded the trial version and liked it). Another search of the web revealed that a couple of lined were needed in the Marlin config files. Once added, recompiled and re-uploaded the problem was solved.

I build a rough and ready box from bits of ply and put the PSU, controller card and air pump into it. I then 3D printed a plastic rail to sit above the X-axis gantry to hold the box. This was/is a temporary measure to keep things manageable. My next alteration will be a home-built acrylic box to house the engraver and provide air venting – at this point I’ll house the ancillaries in a more permanent manner. 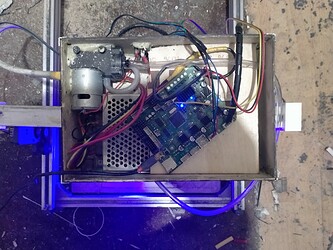 So, I am waiting for some sheets of acrylic to arrive, at which point I will construct a box to hold the unit and figure out a way of exhausting the box through the workroom window (I have a glass hole-cutter, but I need to feel brave before trying this, so I’m just going to have a drop of 20yr old single malt before I make the attempt – purely medicinal of course

Another search of the web revealed that a couple of lined were needed in the Marlin config files. Once added, recompiled and re-uploaded the problem was solved.

Want to share what changes were required to use marlin to drive the laser?

Oops - sorry, forgot to include… 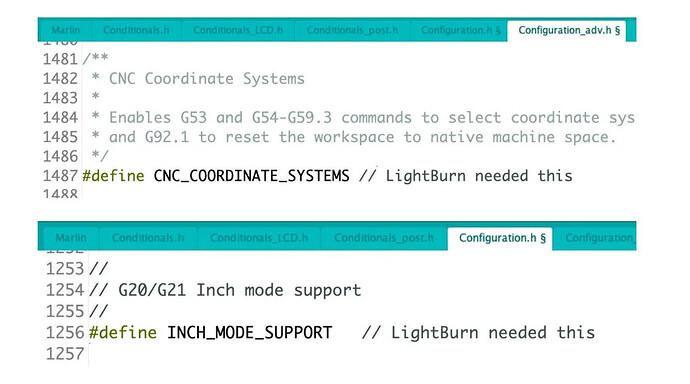 Please share the link of the gantry. I have been trying to find something like that too.

I just 3D printed rectangular box sections, and assembled a basic structure from them using the existing bolts to secure the sides. Below you can see one side (I later ran the stepper cable up the hollow plastic section). It is very crude - a quick and nasty fix - because it is only temporary, until I get an enclosure built. 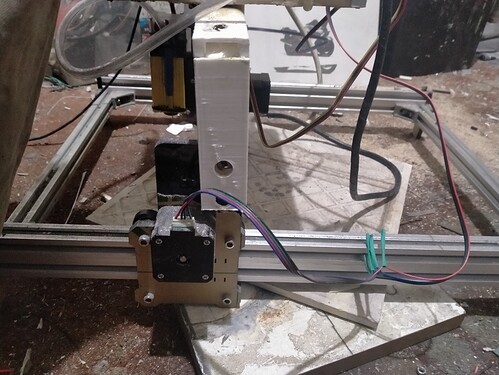 Thanks for the write-up, very useful info.

Can you add purchase links to the parts you used?
What did your final FL end up being from the end of the lens to surface?
Do you know what lens came in your laser module?

Hi Don,
Unfortunately I can’t find a similar frame on amazon or ebay, so perhaps the one I bought was a one-off…All I can suggest is to keep searching for similar products.
The Laser-head was purchased via AliExpress and the link is below. 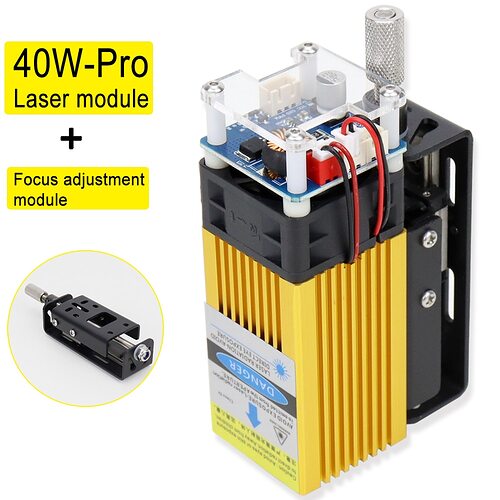 The laser came with a leaflet that stated the optimum focal length for cutting and for engraving. It wasn’t entirely clear, because the lens screws in and the 2 pictures were different - the cutting picture had the lens screwed entirely in but the engraving picture had it screwed a long way out. The settings were from the bottom of the lens to the workpiece. For cutting it stated 40mm. For engraving 20mm.
PS - this info is also on the product description at the above link.

I have a USB microscope with a damaged USB socket which I am currently fixing. When fixed I will use it to obtain exact distances and see if I can work out how/how far the lens should be tightened. I have examined the lens with my eyeglass and can find no markings of any kind, so I suspect it is a cheap chinese job - maybe this should be the next upgrade? 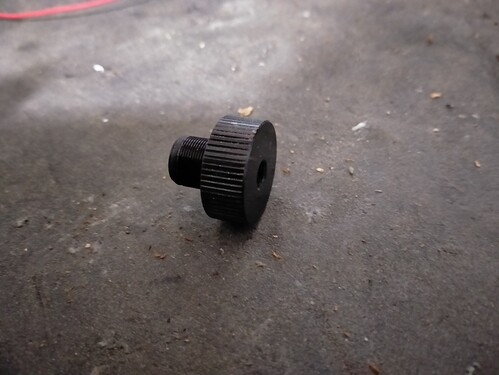 The original Ortur laser engravers used a similar adjustable lens setup. I even made a replacement knob for fat fingers and different lenses. They later, and myself, went to adjustable Z so no longer does the lens need adjusting. Ortur LaserMaster lens holder by DOugL - Thingiverse

This laser came with an adjustable carriage which works pretty well. I have to admit that I don’t really understand why the lens is unscrewed for one use and screwed tight for the other.

You can get desirable effects for engraving with slightly unfocused beam. Maybe that was what they were going for? It’s a common trick.

@Bikerman thanks for the info;

I wonder if they are suggesting that with the lens in or out the FL and depth of focus (DOF) changes?
Or is the lens position and beam waist-length in the pictures just incidental?

Not an optics geru but I thought DOF is a function of the lens and its aperture so I do not know if moving the lens away from the laser source changes the DOF?

This photo is for engraving and shows a shorter DOF. 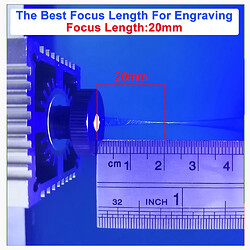 This photo is for cutting and seems to show a longer DOF which would be better for cutting. 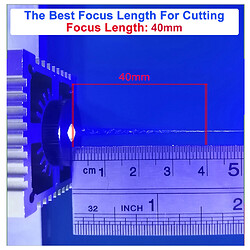 To verify one would have to measure both FL and DOF.