@Tatarize I saw your K40 Whisperer not compatible with M3-Nano post — but what is the status for Meerk40t? I didn’t see mentions one way or another here, on the wiki, in github issues, in git log, or in git grep — and I’d like to update the list in New to K40: Start Here with details.

It’s somewhat compatible out of the gate. It has a weird button thing hooked to an opto, and a pwm control. Both of which my hardware guy says trace to the CPU. That means these things should be configured or processed with some different internal code. But, I’ve checked and all the codes that were previously unused are still unused. We’re fine with the movement and signals for job finish. You can use the M3 as for things and it works as well as the M2. But, I still do not know how to trigger the PWM or whatever GPIO stuff the button there does. Which is mostly what matters. It doesn’t break currently so it’s compatible but you should be able to set a PWM and I don’t know how to do that.

The hardware guys are hooking multimeters to the pins and throwing a bunch of stuff at it. But, we might actually need new chinese software to tell us what those codes are, or somebody who speaks Chinese to ask Li Huiyu what the protocol there might be.

The PWM has an important little chip with 6 legs now next to it. The 214g it’s about the half the size of a grain of rice. 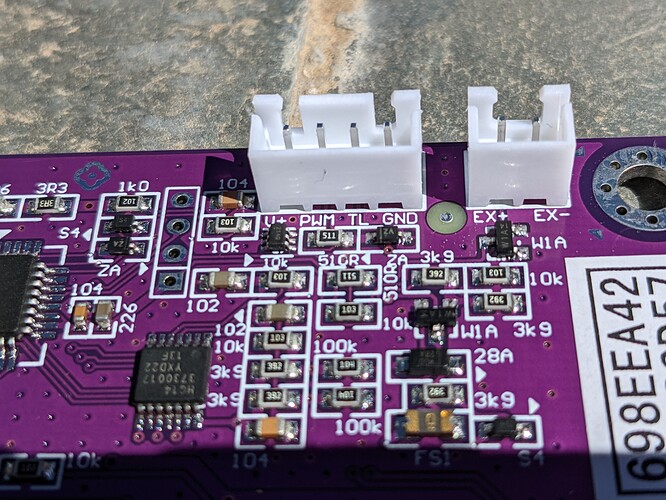 The GPIO button thing has a JC3H7 attached with is an opto connection. It isolates the circuit. so the right side stuff gets connected only if the left side stuff has power without the power connecting. The hardware guy tracked the connection from both of these directly to the CPU. There was an earlier strong suspect that it would have hooked something directly the the CH341B there. The utility of that is that it would be fairly easily to connect that to a pin and change the signal. The USB controller chip totally allows you to detect there’s a controller pin grounded and a couple you could do that with, but apparently it goes to the CPU (Data Bus).

So it’s not broken (which apparently Whisperer is because it can’t quit the wait_for_finished_signal routine) but it has some killer features with no understanding and thus isn’t properly supported. I was going to write to Scorch when I understood the rest of the stuff. As it wouldn’t be too hard to have a power set next to his other things, but somebody said they got one of these cards during general buying which means we the incompatibility there is an issue. 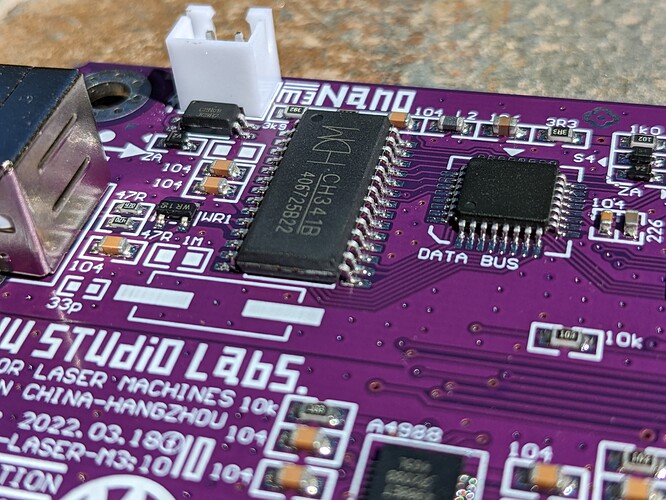 Thank you! Hopefully my summary status in Getting Started is correct.

I might need to check some other stuff, I did get it paused in a 238 state with the new board which is an issue since it doesn’t send resume without room to send the resume, and considered 238 the busy state, wherein it would ignore packets. It probably still lets you force resume in busy, and I might not be coded for that.

I did figure out the button for the most part. It only works in compact and compact-paused mode. And flickers between 204/200 and 232/236 when pressed.

There is some info on Cloudray’s M3 Nano listing (expand the “description” panel): 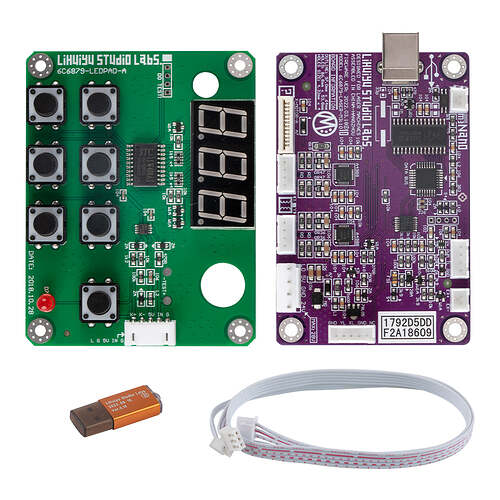 There is a “plus” flavor which uses Trinamic drivers.

The button pauses/resumes when a job is running and can be used to rerun a job when its done. That’s actually really useful.

There is also some info about how the PWM header is supposed to be connected to the PSU.

The new software doesn’t seem to be included and there also is no link.

@CloudrayLaser since you sell it, is there any chance that you can provide information here for the M3 Nano?

Your help getting Meerk40t and K40 Whisperer support for the new functions of M3 Nano would be much appreciated. If you can provide @Tatarize and @Scorch with links to the software for the boards, it will help these two popular laser control packages support the hardware.

Thanks for any help you can provide here!

Yeah, the plus flavor should be fairly plug and play. In fact one of the more hardware savvy devs totally did replace his board with those drivers since they have the same form-factor. The frankenboard was actually really quiet, and moved like a charm.

The description there if the button is the reason why we more or less figured out some of the secrets of the multiplexing button. I’m still not sure exactly how it does the repeat. It seems like if we start the job and hold it, we can do polling. But, you can’t actually just launch a nothing job directly into a paused state that I know about. Though in paused mode, we can easily poll the button state. I would have expected the button poll to be universal but it doesn’t work like that.

Yeah, it mentions new software which is important, that there’s no link at all isn’t great but if there is some new software somewhere (even currently in process of being written) it greatly increases our ability to get an answer.