I have a sherline cnc mill. I’d like something with more travel and a LOT more rigidity. The Sherline lacks in two areas: the Z axis is just a single unsupported steel beam that serves as both the dovetail way and the motor support, and the headstock is cantilevered off it on a fairly short dovetailed slide.
I’m looking at some way to massively increase the stiffness of both of these.
One thing I’m considering is an integrated linear actuator, that has two linear ways with a ball screw between them, giving way better side to side stiffness and some increase in bending stiffness (that I’ll increase a bunch more by bolting it to a steel tube.) 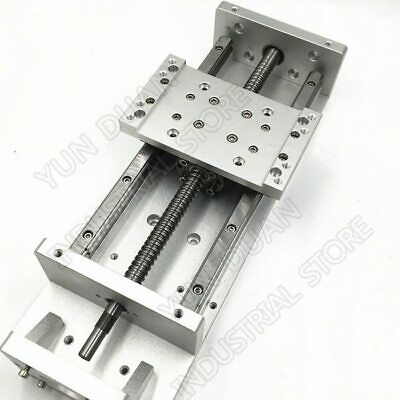 
is the kind of thing I’m looking at.
Has anyone ever used one of these? Do you have any thoughts about how it would stand up to the kind of shock loading you get from milling?
mcdanlj (Michael K Johnson) February 4, 2020, 11:58am #2

It’s made of aluminum, which rings; you’ll see terrible surface finish even if the bearings aren’t chewed to bits. This was why machinists were dismissive of the cool-looking aluminum-frame SwissMak. (Also, it hasn’t delivered, with contradictory explanations, but that’s another story…)

That’s going to use “chiwin” not HIWIN HG15, so tolerance on the bearings is likely to be loose. I’ve seen people building epoxy granite mills with larger linear rail (HG15 seems on the small side to me?) but I don’t know how well it has worked. Several build logs; haven’t run across as many reports of how well it’s worked over years though.

From time to time, it’s been possible to get new cast iron bench mill frames without screws or motors to use as the skeleton for CNC mill builds. I don’t know what the current political situation has done to that supply, though.

Just the plates are made of aluminium and the surface looks sandblasted and anodized, which is just fine (in my opinion). The rails might not be genuine HIWIN, but any profile rail is better than a unsupported steel beam in respect of flex.

Sure, you don’t know what you get, until you have it in hand.

For me, this axis is looking pretty decent. Problems could be, that the slides are not clean enough and therefore not glide smooth or that they have some play (but probably less that round rails anyway).

If you need a really stiff rail, you sould normaly get slides with slightly oversized balls, which makes the system stiffer. I usualy use CPC rails for that.

I have a big box full of HSR20 linear ways, and they’re pretty amazing. I like this because the alignment between the two ways is done for me at the factory, as is the ball screw to ways alignment. My thought is to take some 4" square steel tubing I have, weld up a right angle, then take some 1/4" thick 4" wide precision ground steel stock and epoxy bond that to the tubing so I won’t distort it and can ensure they’re well aligned to each other, then bolt these slides to those surfaces.
I could do much the same but use the precision ground steel as box ways, as Dave Gingery did in his homebuilt lathe/mill, but I’d like the reduction in sliding friction that ball bearing ways would give me on a cnc mill.

Just the plates are made of aluminium

The whole frame is aluminum. I guess you are saying that the frame is built of aluminum plate?

Yes, that’s what I meant (just the rails and spindle are steel).

I just realized: instead of bonding precision ground steel onto an underlying steel frame, I could go all Dan Gelbart on this and make a 90 degree angle with two chunks of granite surface plate, and bond these ways right to the surface plate. Then I’d have all the damping, precision, and stiffness I could ever want.
As long as I never need to move it. And I reinforce the floor.