My new 50W laser really starts shaking when I do engraving. The problem is that the table I made was originally for my much smaller K40 and rests on swivel casters so I could move the table to get behind the machine when I needed to. The swivel casters have some play in the swivel joint by default. This was fine for the K40, but the 50W has a much higher mass head which sits much higher above the table, giving it a greater moment arm to induce oscillations. 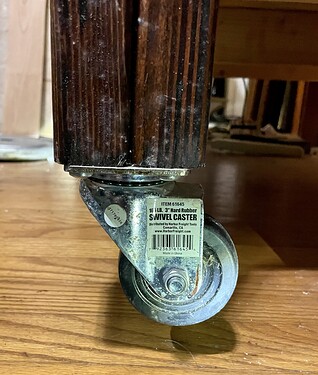 After some contemplation I remembered that they make retractable lifting casters for work benches. 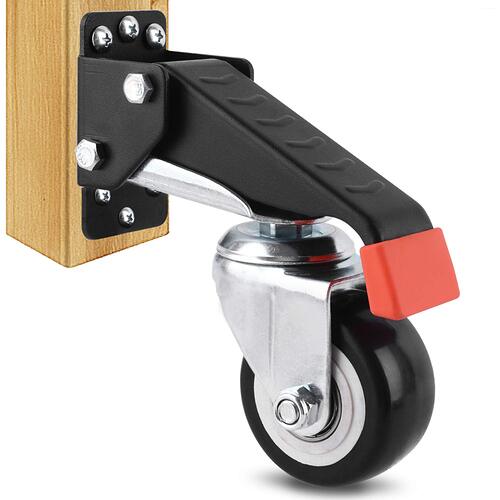 The bottom of the work bench legs had to be reworked to keep everything the same height because my cooling bucket rests in a cut-out in the bottom shelf, so it floats above the floor when the table moves. 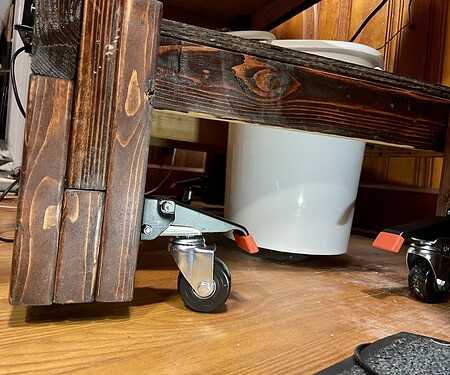 Because of the way the table is made I was able to put the new casters on the inside of the legs so they are out of the way. Work like a charm and very little shaking when engraving now. May add some cross bracing to the back of the table to stiffen it up a bit. 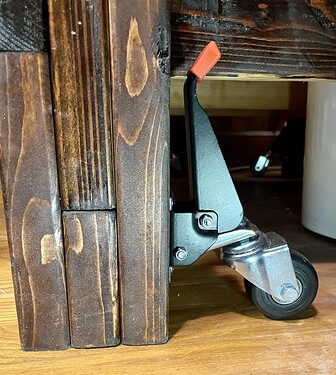 That’s a great price they are normally 2x that!

Yeah I was pleasantly surprised to find these as I was expecting to pay a lot more. Construction seems solid. They also included 2 wrenches to tighten everything together (Important for the wheel attachment) and a mounting template. The instructions were kind of of crap, but it’s not hard to figure out.

You locked in on that one!

Nice mod! Did you do all 4 legs or just the two we see on one narrow side of the table?

I’ve bookmarked the kit and noticed there were 4 but most of the time I see only 2 on a workbench. This is mostly because it can be impossible to get to the back legs and pulling out from a wall or just moving around can all be done from one side. But, given the vibrations from a moving mass doing rastering/etc I was wondering if 2 solid legs were enough to dampen it.

Regarding the Russ Sadler light weight laser head, if you go that route let me know as I might be able to hook you up with a manufacturer here in the US. I’m trying them out now and hope to get parts this week.

Did it solve the ‘walking’ problem…?

I was wondering if 2 solid legs were enough to dampen it.

With 2 up on the short side and the other 2 down it’s actually fairly stable. Not as good as all 4 down, but not bad.
I’ve got about a 6in gap on either side of the bench, and with the casters on the inside edge, so it’s just enough room to get to and engage the casters.

Since you wouldn’t be moving it that often you could always get a small jack to raise each end then then engage the casters by hand.

Did it solve the ‘walking’ problem…?

Maybe I should have phrased it ‘oscillations’.

Yeah, it fixed >95% of the oscillation movement. Can’t decided if the remainder is due to the bench needing to be stiffened or if it’s just the rubber feet on bottom of the laser deforming laterally, or some combination of the two.

Since you wouldn’t be moving it that often you could always get a small jack to raise each end then then engage the casters by hand.

When I was reworking the bottom of the feet on the table I just used my car’s scissor jack to lift the ends up to work on them. Like this one. 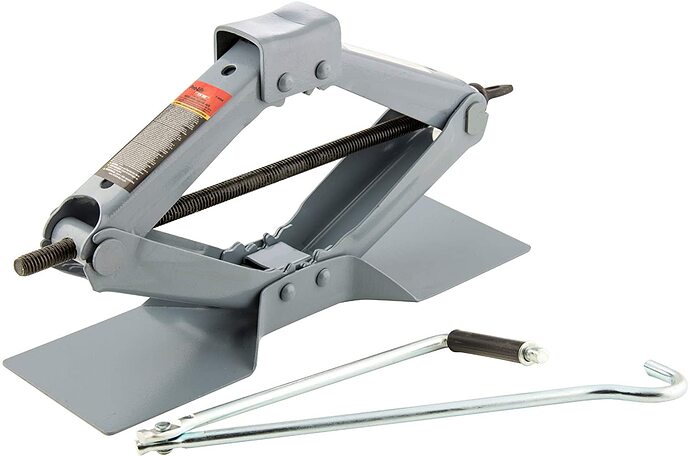 Compact, Light Weight to Carry in Your AutomotivePro-Lift T-9456 Grey Scissor Jack is the 3000 pound capacity scissor jack. It is a great light weight jack for the garage or to carry in your automobile.The compact size and the light weight make it...

That’s a low profile option or, if you have enough room, you could use a small bottle jack. Been thinking about getting this one as it would fit under my bottom shelf. While getting the table up isn’t an issue getting it down gently is another story. 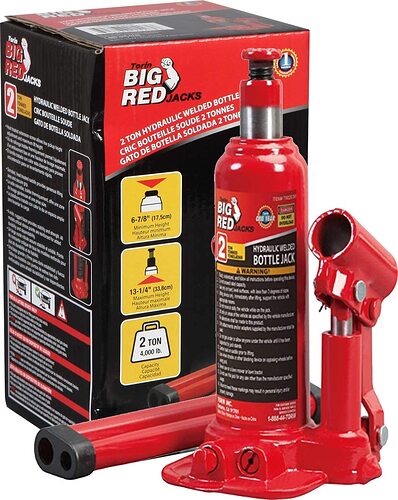 The Torin BIG RED TAM90203B hydraulic bottle jack is designed for residential and commercial use. It is industrial welded and engineered using a drop forged alloyed steel construction that is ideal for quality and durability. The inner/outer welded...

Good point, they probably unlatch quite abruptly and drop hard and while you can probably hold up the table on one end to ease it dropping some it’s still heavy and unlikely you can get behind the other end too.

Maybe a foam block between the side of the leg and the wheel release handle can slow the drop.

if you have enough room, you could use a small bottle jack

If you need low-profile lifting and haven’t experienced them before, check out toe jacks. I first saw one when I bought my big lathe and the seller had one which helped us get it mounted for transport.

I had seen toe jacks before on some YouTube machining channel and, when I was looking up jacks, it took me forever to remember what they were called.

Toe jacks do tend to be a bit pricey, $85 and up, but they are ideal if you need to lift a heavy piece of machinery up enough to get something underneath.

they probably unlatch quite abruptly and drop hard

Yeah, the first time I unlatched one it slammed down hard and my wife was like “WHAT the Hell what that?!”

Turns out you can leverage the table some for all but the last. So I found if I drop the back first I can kind of ease them down by keep pressure on the front, grabbing the top back edge of the laser works best. Then for the front I can lift up on the front edge to keep it from dropping too hard.