Last one for the night. Drastically different results than the beetle raster from earlier.

This image was also much darker on average. I’ll have to pay attention to the average brightness of each image when guessing at power and travel speeds. 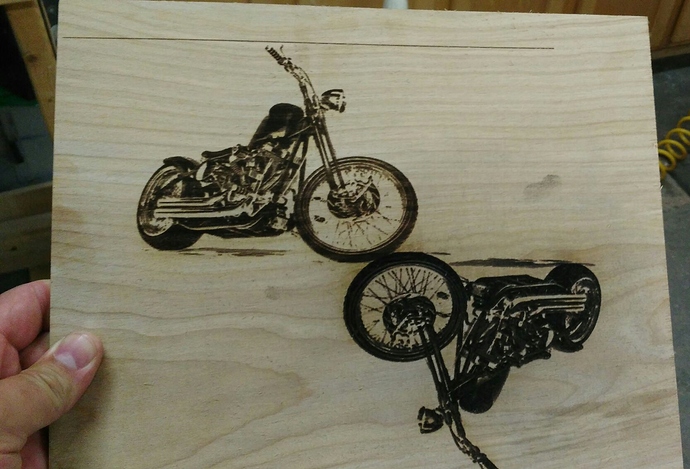 Yeah, due to your scan lines being closer the image will be darker for sure. Still looks nice. I am using 0.1 spot size myself. Are you focusing the engrave on the top of the material or into the material? I’ve been lazy to move my bed up or down & thus wondering how everyone else is achieving their nice results.

I just had a thought based off your comment “I will have to pay attention to average brightness of each image when guessing at power and travel speeds”. I wonder whether the software could analyse the bright/dark ratio in the raster image to “suggest” settings? Any idea if that would be possible in future +Peter van der Walt?

Roughly at the top for focus. I still need to find my exact focal point. I’ve been using 50mm as a default but I’m probably a bit off

That must be also a very hard wood based on you speed and power. Unless you are capping the pot very low?

The pot isn’t in the mix, this is completely PWM. So 100% would trigger about 4.7v trigger. The wood is just birch ply from home depot. You think 40% should have burned darker?

now that i think of it, its comparable to what i get by doing 100% power capped at 15mA. I see lots of detail

I’m just guessing at settings right now. I really don’t have any benchmarks to base it so it’s all trial and error right now. Trying to figure out high power and high speed vs lower power and low speed.