I am trying to use the laserweb4 with a grbl ERS Timsav foamboard needlecutter and also a laser. This unit uses a rc servo for the z axis lift. Those parts I have working but I need to add a pause (P1) for the servo movement after the M3 Sx commands in the gcode. The servo is run off the D11 laser pwm pin when running in non laser mode in grbl. I really like the gcode generator used, its much better than the one in inkscape. I just need to solve this one piece and I should be good to go

Welcome to the forum Dudley.

Have you considered making a script to add the gcode commands you require, or are you sending directly from LaserWeb?

Yes I was wanting to use laserweb as the grbl control software as well as the gcode generator. I had been using grbl controller but it has issues with grbl1,1 and much like laserweb the developer has moved on to other things. I was trying to add to the tool start gcode but then I could only assign 1 laser intensity/servo angle followed by the delay. I would like a couple different values of intensity. We are using an extension in inkscape to do the gcode but its terrible with toolpaths jumping all over the place.This gcode generator is far more friendly.

Without casting any shade on LaserWeb, but also recognizing that development has been sparse lately, it might be worth comparing to kiri:moto which has similar goals and features but is under active development throughout. The primary author, Stewart Allen, has actively sought feature suggestions and might be interested in your use case. 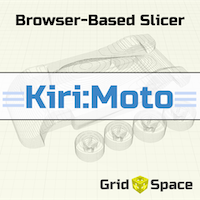 Kiri:Moto is a unique 3D slicer that runs entirely in browser and creates output for your favorite maker tools: 3D Printers, CNC Mills and Laser Cutters.

You could try to change the “Laser Intesity” setting to “P1 S” instead of only “S”. This will add the P1 in front of the S param of G1 commands. Though I’m not sure this is working with grbl.

You could also try to set Laser Intesity to “G4 P1 S” which should work, but causes the power and feed to be executed after the G1 move. The result would look like this:

There is the gcode setting “Intensity Separate Line” which moves the intensity to a separate line, but unfortunatly this is not implemented for raster operations.