Hi All,
My K40 was starting to reduce its cutting performance the last 2 days. I decided to do a beam alignment just in case things were a bit out of wack. I didn’t adjust anything yet, but instead of getting a nice fine pinhole when I press test I got what looks like 2 lips about 4mm wide. 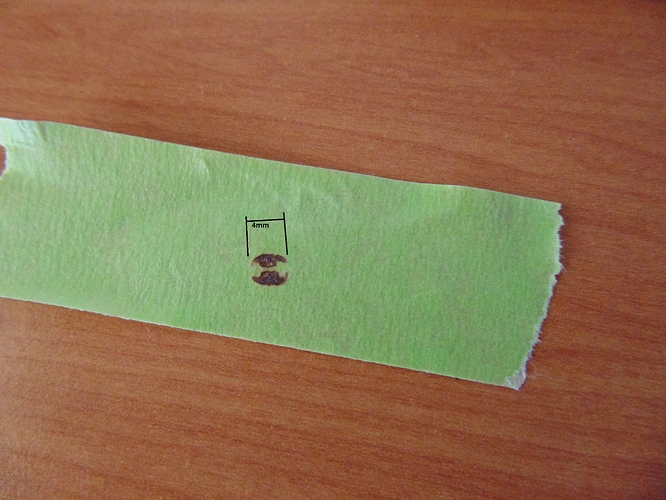 The is even from tape on the first mirror next to the laser so the issue is before the mirrors (i.e. the laser tube).

Any ideas? Does the laser tube have an internal lens that may have gone astray or is it on the way out?

Thanks in advance.
Mitch

Looks to me like the tube is on its way out.

This is typical of a tube that has shifted to a higher-order transverse mode. TEM01 is the most common mode to shift to; it’s sometimes called the “donut mode” and in theory is donut-shaped but in practice seems commonly to look like the two dots you see here. [Edit: TEM₀₁* (donut) is different from TEM₀₁, which looks like two dots.]

Poor cooling control can lead to this happening earlier, but as far as I can tell it’s a common failure mode for even well-cared-for tubes that are just used up.

Thanks for the reply.
Not the answer I was after but spidey senses were saying this to be the result. Its not an old K40, having done less than 50 hours but they are made to a cost not quality I guess. The water temp has never exceeded 25 deg Celcius when cutting, but I might lower the water temp more with some freezer bricks in the water container.
Regards,
Mitch

25⁰ is probably too hot, even if you got a high-quality tube. Once the tube shifts mode, it doesn’t shift back; the damage has been done.

Cooling the laser tube is critical to not burning it out. The recommended temperature range is narrow. Getting this right is hard or expensive; getting it wrong is repetitively expensive. TL;DR This article is too long to read. What can I do to stop worrying about it? Buy a refrigerated cooler such as a CW-5200 or LO-600W / Q600W with a cooling capacity at least 5 times the max power of your laser and at least 6 times the maximum continuous power you will use, hook up all the alarms including …

How much cooling is enough?

Enough cooling to keep your cooling water bucket under 20C/68F and enough pumping to keep about one liter of water per minute flowing through your laser tube.

The laser tube makers recommend water at 18-20C (64-68F) and about 1 liter per minute. Actually, the laser tube designers for the K40 laser tube didn’t say a word about it, because no one knows who exactly they are. The 18-20C temp is a common recommendation from other laser tube makers, and the 1 L/m is based on commercially available 80-100W tubes. But they’re really good guesses.

Doing this flirts with causing thermal expansion/contraction cracks in the glass.

The innermost glass tube contains the lasing material at a power density twice (or more) the density of the actual external beam and also contains the 10,000V electrical arc that excites the gas to lase. It’s really hot inside that tube. The next tube out contains the reserve gas, where the tired (Lase-y? ) gas from the inner tube goes to rest. The outermost tube contains the cooling water. It’s job is to keep the middle reserve gas tube cool enough for the CO and O2 wastes from the lasing gases to recombine into CO2 to live to lase again. With very hot gasses and glass on the inside, and cold water on the outside, all meeting at the ends which make the tube supports, the temperature differences get critical.

There’s a lot of good information in the K40 Laser: Getting Started category, worth reading even if you’ve already gotten started.

If the tube have the strongest possibility of failure, You should also have a look to the lens (& mirrors) for a possible crack, that happen to me as I reported many years ago.

You should also have a look to the lens (& mirrors)

Looks like that’s one of the first things @Mitch looked for!