Just uploaded a smaller version of the clock I made recently.

Just uploaded a smaller version of the clock I made recently. This version only has 2 leds per segment and can be built with way more printers now as the biggest part has been reduced to 118mm x 141mm (max. Z height required is only 15mm). Also it’s only using two led strips and is very easy to build 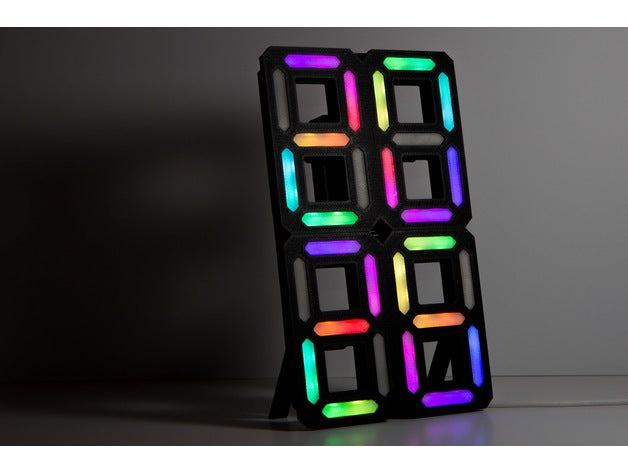 This is a smaller edition (hence "SE") of my Retro 7 Segment Clock: https://www.thingiverse.com/thing:3014572 19.12.2020 - Replacement / Alternative Before building this you might want to have a look at this one, it's some kind of replacement for...

The only thing I would do differently is to use an ESP8266 and ditch the RTC. Connect to the net and set the time by atomic clock!

@Mike_Thornbury I wouldn’t ditch the RTC then. If ESPs have a similar drift to cheap arduinos you’d need to sync every 30-60 minutes… ^^
Apart from that I didn’t want do add components like a logic shifter (esp8266 -> 3.3v logic level)… after all it’s just a clock.

Edit: But now I remember having two or three DCF77 receivers somewhere … ^^

No, their drift is minimal over 24 hours. About 300 seconds a year on a WeMos D1 mini. I never use logic shifters with LEDs, and the 3.3v logic only matters between the data pin and the first LED chip - after that it’s repeated at the base voltage of the strip. Never been an issue for me.

I set my NTP sync to 4 hours, but I’m sure that’s overkill. The packet overhead is a few tens of bytes 6x a day.

I guess I just prefer to turn it on and have it set to the correct local time, wherever I am in the world. And I like making things as basic as possible - no buttons, no additional circuits - you know your clock is always right.