well im about to jump into the world of co2 lasers, namely a ridgeway k40 purchased via ebay, decided as lots of moidifcation is going to happen to go for the “run of the mill” k40 after looking at so many k40 adverts my head began to spin, worryingly lots of the photos on the adverts seem to show machines with a 110v input on the rear? should I be concerned or is it just them using generic photos in the listngs, hard to judge as so many of the ebay adverts seen to have the identical text in chinglish on the listings,
anyways my name is Nick and thanks for welcoming me into the forum

Welcome! 110-120V input is standard US power. Do you live outside the US or do you have another reason for concern?

Gotcha, most of times there will be a switch on the side of the laser power supply for using either 115 or 230. 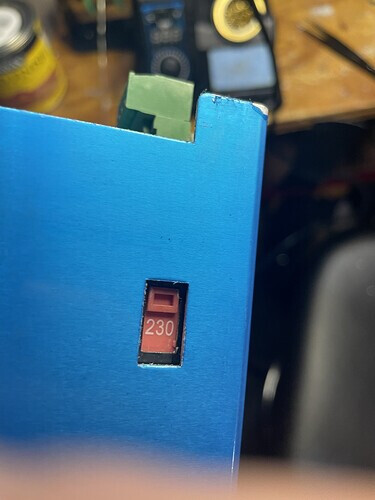 Just FYI, in your profile settings you can set a flag for your country of origin which can help people quickly determine things like your likely power requirements or time zone.

had a look on the photos but can’t see the switch, have messaged the seller to see they say, if you are looking at the machine front on where was that on your machine, thank you

The switch is on the side of the laser power supply which is inside of the machine. So it’s not something easily visible.

ah that puts my mind at ease, machine ordered, also ordered some switches to create interlocks and an analogue voltage meter

thanks for that, will post up my findings and clear photos when machine arrives incase anyone else every comes here looking for the same answer