Just got this awesome "Deal" from makerbot.

Just got this awesome “Deal” from makerbot. Spend $125 to replace a worn out ‘smart’ extruder.

I just fail to understand how something wearing out in under a year is acceptable let alone something you should have to pay for. Though these days it’s all too easy to attack makerbot. 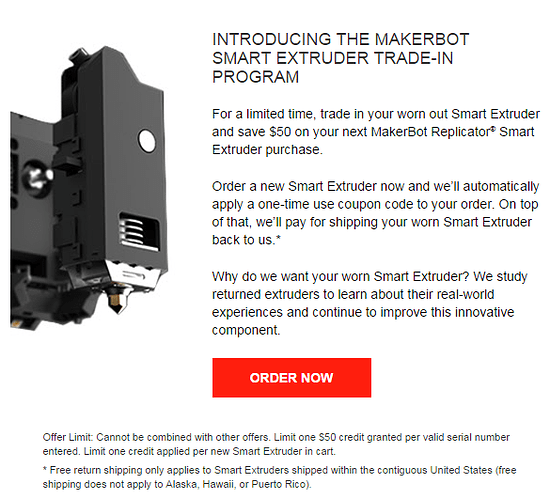 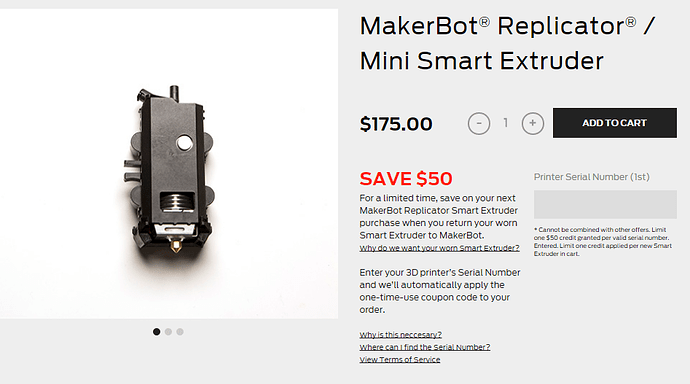 “We study extruders to learn about their real world experiences” - that has got to be a classic “We don’t test our stuff, you do, and you pay us for the privilege too!” Clearly extruder tech is one of the ‘tricky’ bits of 3D printing, but I agree that they should be more willing to replace the broken ones. Look at Tesla’s response to their drive train issues. (Granted you didn’t pay nearly $100K for your printer but it is a very different customer experience)

I’ve only seen the MB extruder in tear-down photos, but it looks cheap. I give them credit for the movement encoder and filament-out detector switch, but that doesn’t make up for the rest of the device.

Wow… I’ve updated my harsh but popular post with your picture, hope it’s OK with you (with credit as usual: http://www.tridimake.com/2014/06/do-not-buy-makerbot-3d-printers.html ). I really feel sorry for makerbot customers that fell in the marketing trap of their old-style business.

@Ashley_Webster you forget, the makerbots are actually open source based printers. They just figured no one’s going to stop them so patent it. Also I suspect the clever bits like the encoder and filament detection comes from stratasys

I think it would have been up to the contributors to object through a legal process. Assuming the open source wasn’t a BSD license, then there might be no recourse as long as credit is given.

I know the 3D Systems CubeX has a filament out detection switch. I don’t think that’s a big deal in itself.