to buy at Hobbyking: http://www.hobbyking.com/hobbyking/store/uh_viewitem.asp?idproduct=80709&aff=1304674

"Mini Fabrikator by Tiny Boy, 3D printing for everybody.

Features:
• Large Print area for its overall size
• Open Source designed and supported
• Compatible with many popular applications and software
• Portable and easy to set up
• Future proof with easy community driven DIY modifications
• Marlin based hardware with ability for expansion
• Fun for all ages 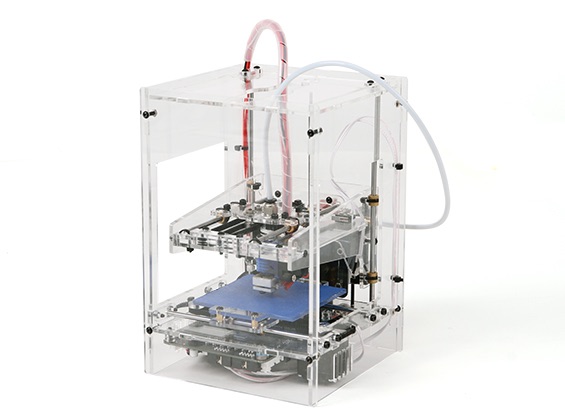 One could buy this thing for parts, build a bigger printer with it. All the expensive parts you need for a very low price.

The problem is that hobbyking charges a ton for shipping and it’s all by the gram. To ship that I would think that you would easily be in the low 200’s all together and in all honesty at that price you coukd build a cheap reprap.

And yeah @Brook_Drumm ​ lots of things on hobbyking take a similar look to other products. That being said their parts are so cheap I still buy everything from them for quads and planes and such.

Is that a knock off E3d? What board is that?

This is tiny boy: http://tinyboy.net/tinyboy-bom-list

The board is not a ramps though, if you look at the pictures.

@Joe_Spanier It’s a chinese board that puts the RAMPS circuit, the Atmega1280/2560, and the stepper driver chips all on the same board. Despite being a single board, it’s probably closer in layout to a RAMPS than it is to any of the comparable single-board designs like RAMBo, RUMBA, Megatronics, etc. They just made it RAMPS-compatible and didn’t bother giving it a distinct name.

That board seems to have a disturbing lack of fuses. Acrylic structural frames give me a queasy feeling.

You should be fusing before the board and not relying on the boards fuse anyway really. But I doubt they are.

@Rien_Stouten it use nema11 for XYZ, not very useful for bigger build.

They usually have SMD fuse. Good excuse to learn soldering if one blown.

@Joe_Spanier There’s no mention of E3D anywhere in the product page.

So this is a cheap printer rather than a kit. No bed tramming needed, may be small size helps. Will this broaden the reach of 3D printing, or created another batch of frustrated customer?

@hon_po It appears to be a chinese E3D clone (the kind with a PTFE liner), though the fan shroud on it looks surprisingly authentic.

@Whosa_whatsis Saw the injection moulded fanduct before:
http://www.aliexpress.com/item/3D-Printer-Parts-DIY-Reprap-E3D-V6-Injection-Moulded-Fan-Duct-Fan-Housing-Guard-With-Cooling/32366473357.html
Being a PLA machine, having PTFE liner may be a plus. Not all E3D clone has the liner. I think all depends on HobbyKing’s manufacturer.

For those who interested, the author of tinyboy said in a HK forum he use genuine E3d for the school project. So his print quality picture may not represent the HobbyKing unit.

He also said that his design team and HobbyKing operation is independent. Don’t know what that mean. I do hope they pull this off.

the fan shroud is what threw me off too

this would probably be a decent starter that once I get familiar with, can use to print myself a rep. My nieces want one also, so I could just pass this on