I seem to have some jerkiness in motion using GRBL-LPC

So I have GRBL-LPC and Smoothieware running on two separate Sbase boards I have. Using external steppers to move my custom machine and with all the equivalent settings being the same, the movement seems to stutter a bit with GRBL-LPC. This most apparent when doing engraving at 45 degrees where both the A and X are utilized simultaneously…

Any idea where to start looking?

That sounds odd. Usually grbl-LPC is much faster than Smoothieware on plaing gcode. Did you set grbl to laser mode with $32=1?

Which software do you use for sending the gcode?

To be clear I am testing Smoothieware with Coheshion 3D’s smoothie cluster update. Laserweb does not recognize this board. On Lightburn though it runs smooth regardless if I turn on smoothie cluster in the software.

I am not sure if this is a issue with speed in sending data to the controller as I am not moving very fast.

I have made some great progress with our custom rotary laser. Some videos below 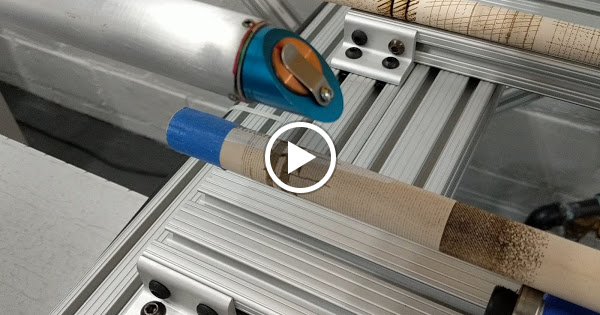 We had some custom CAM software which etches in a continuous rotary like a lathe. As you can see we are achieving pretty decent speed especially when we do not have to constantly decelerate. We send the code using Laserweb.

The rotary in the video is a chuck directly driven by an external integrated stepper. GRBL is sending 35ish pulses per degree $103 through the MKS Sbase signal pins. This value is adjustable by the integrated steppers. We have since updated our rotary to a larger belt driven unit with a 5:1 reduction. By adjusting the settings on the microstepping input on the driver we reduced GRBL $103=22.22.

We seem to be having a couple issues with the laser significantly slowing down now once it fires and I am wondering if there is some wrong with the way we are exporting our Gcode, now that we have more dots to put down per revolution. I copied a small section of our Gcode at the bottom.

Is processing A axis moves anymore intensive than X or Y
Does having moves or laser power with higher decimal points bog things down?
Is there a table or resource that I could theoretically calculate what my speeds can be?
Does increasing steps per mm or degree slow things down?
Would a faster computer for sending help?

Any help in troubleshooting is greatly appreciated.

Gcode sample. etching only 0.25mm length of rod. We have run code that extends to 1200mm with the A values extending into the hundred thousands.

Can you post your $$ settings. Specifically looking for $32=1 to put it in laser mode.

I don’t have access to the machine for a while but yes I am 99% sure laser mode is still on and was not changed.

If lLserWeb does not recognize the board with smoothie cluster firmware then maybe this firmware is sending a different version string, which is not recognized by LW. If I know what they send, I can add it to the accepted firmwares.

Hint: The M4 line in your sample is a potential problem. You should set the Z0 on a separate line with a G mode in front (i.e. G0 Z0).

Thank, I suspected there was a lot of room in optimizing our code. I’ll try some if your suggestions and report back when I get back from vacation!

Thank you for these thorough suggestions. I tried optimizing my code with each of these items but without much improvement sadly. There are two areas I intend to review further.

I put together the below spreadsheet.

I wonder if anyone can comment what would my max theoretical speeds could be. Is it limited on the lines of gcode per second (the last column)?