I’ve been wanting to print this 3D printable glider I found on Thingiverse ( http://www.thingiverse.com/thing:56147 ) but the wing cores are thin wall and my several attemps in ABS have warped and layer split, so I was determined to print them in PLA instead.

I’ve heard the Budaschnozzle (the version I have, 1.2) wasn’t too great for PLA, so I got busy and built an X-Carriage for my printer to fit my QU-BD DD extruder so I could run some PLA stuff. Before I swapped the carriage off I decided to try running some Ultimachine PLA samples, which I got free with my last order, through the schnozzle.

I put a small 40mm fan on the schnozzles brass/copper heatsink cup at set it for 30%, retuned my PID settings in reptier/repetier firmware with the fan set for 30% and “M303 P0 S185” as gcode and put those values into the EEPROM.

The prints have been working out great so far! The yellow pic is how my thin walls often in ABS tend to go (although this is an extreme example and while I was testing the effects of skirts on prints) the red and the green are in PLA. 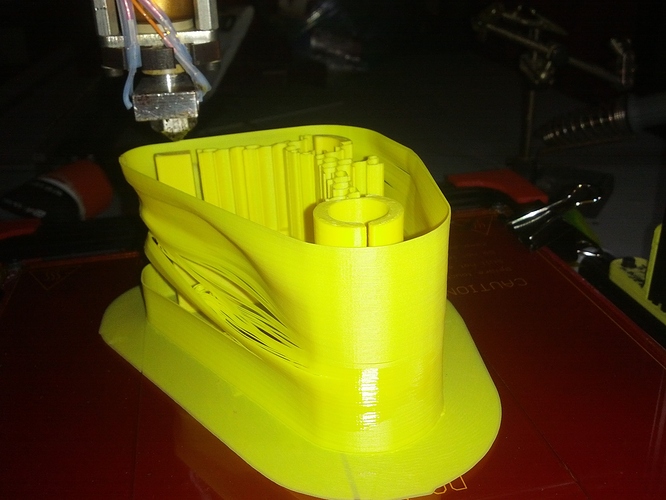 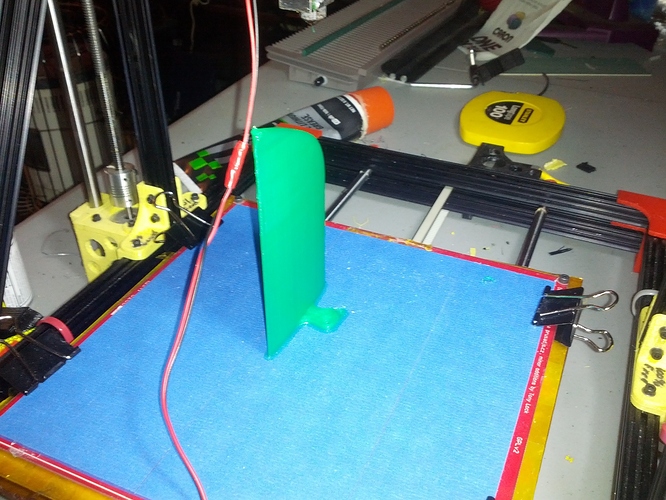 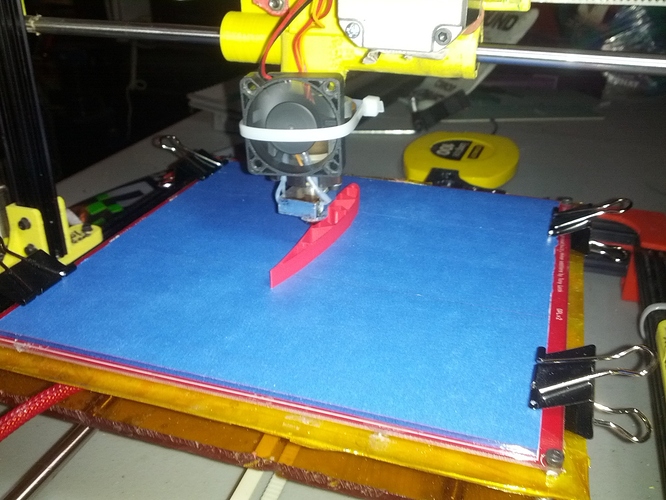 What sort of problems were/are you having and what sort of results are you getting from the higher temps. The yellow seen above (MBI ABS yellow) was at 225C The print itself turned out fine, but the thin wall of the skirt obviously had problems.

Edit: Although it’s not entirely unexpected to see that result with the skirt. The inside temps are warm and the outside are cooler which would cause the outside to contract faster and result in those inward curves.

Generally, splitting and delamination. You might double check filament dia by measuring the filament you’re printing. The yellow PLA looks like you may have been under extruding. Or just going way too fast.

I measure my filament religiously on X and Y cross sections. The yellow ABS extrusion speed for the skirt was about 25mm/sec.

guess I’m not much help…
I’ve found some MBI filament to be quite nice and others that just won’t print well. I’ve also found that enclosing or bagging the machine helps with consistency.

Any info exchange is good, thanks for the responses

I want to try an enclosure for my printer but most of my printer parts are PLA at the moment. Need to print more parts in ABS but I keep getting sidetracked!