Iterating on the XY motor mount and brace.

Iterating on the XY motor mount and brace. Given my FDM/CAD skills are quite recent, and this is the largest and most complex object I have designed and printed, if this works I will be overly impressed with myself.

One in a series of iterations… 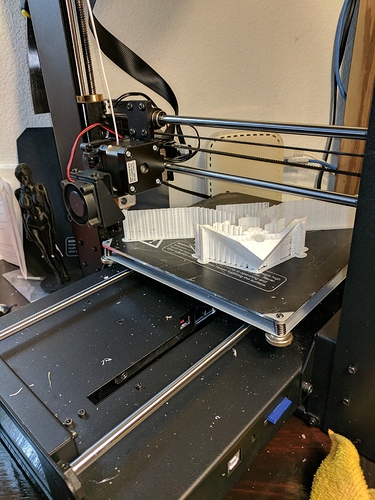 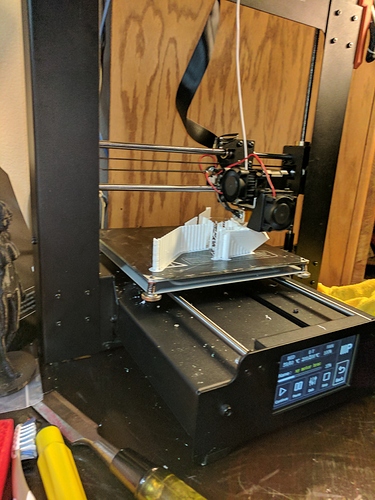 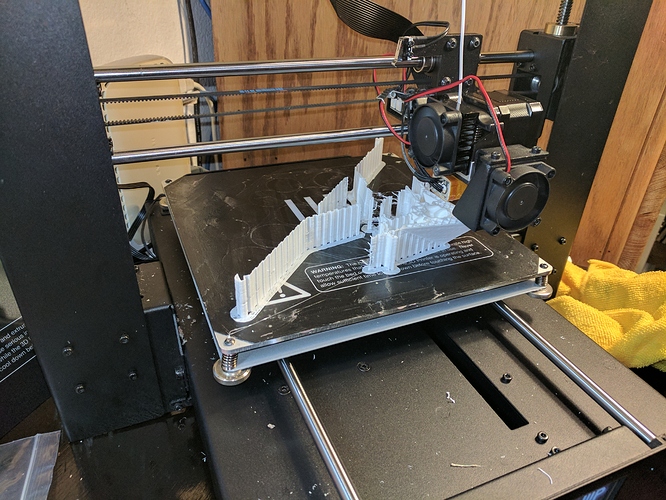 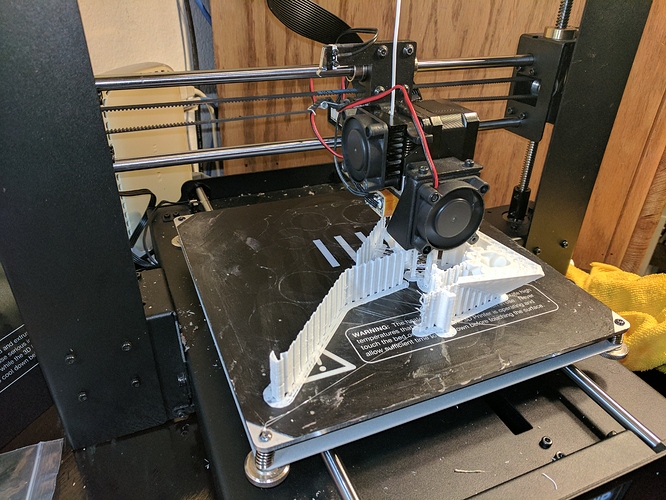 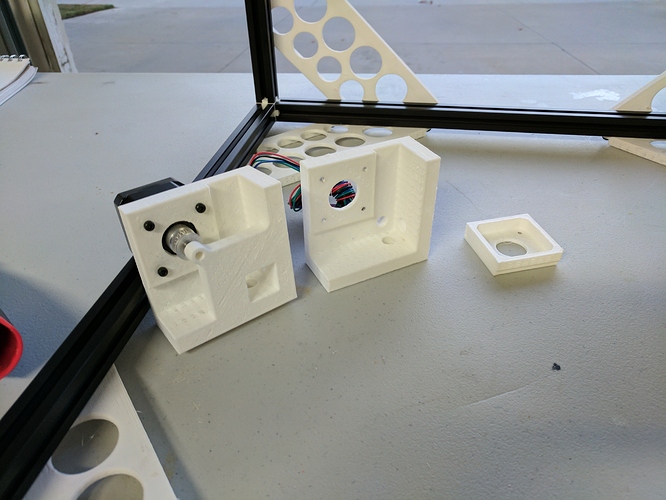 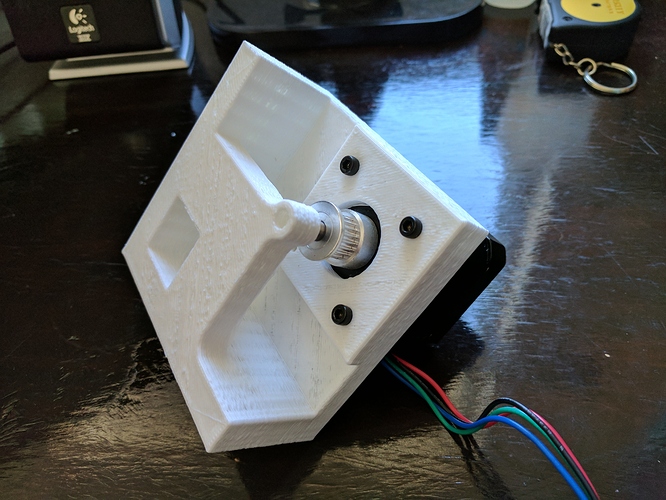 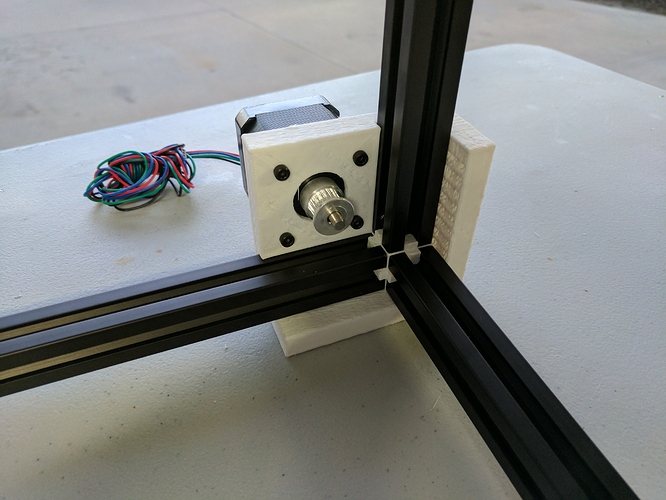 Curious why you’re printing up on a corner during design iteration? I can see it for “final” parts to get the layer lines in a good orientation, but it’s an awful lot of supports for a prototype

Even if it would be the final part, the layers are oriented in the completely wrong direction if I understand the design correctly.

I would have printed it flat on the bed. But I would also redesign the part a bit. There is probably no functional need for the motor recess. So you could just add some big chamfers and remove the counter “bearing”. Which is, without a ball bearing and with this layer orientation ,pretty much useless anyways.

Maybe it’s also a good idea to consider the Aluminium extrusion as a contact area for the next extrusion instead of a plastic part. This will always lead to a stiffer connection.

I really like to see if people try new ways. Even if it’s maybe not the final solution, it leads to new ideas. But sometimes it simply doesn’t make sense to reinvent the wheel

First the corner cubes really need to be printed in this orientation. Cleaning out support structure from the complicated side of that structure would not be fun. Any leftover bits would mess with fit.

Second, tilting up allows a larger brace to be printed on my printer. It might be excessive, but I like a larger diagonal brace. As it is, this just barely fits.

Third, in one of the earlier iterations I had a bridge that wrapped around the extrusion to support the end of the motor shaft. In this orientation I can (and did) print that bridge without supports. Left off that bridge in this iteration. Might be excessive. Might add it back later.

Well, that was a short ego trip.

The print completed, and the part works, but I did miss a few things, as might be clear from the picture. Corrected, and printing the next iteration. 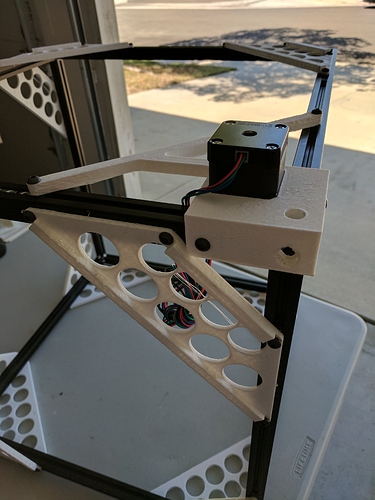 You have some serious underextrusion problem.

@Pjotr_Lengkeek Yes. For quicker iterations, printing at 150mm/s (and 20% infill). This is the maximum rated speed of the printer … and perhaps a bit optimistic. For now, the prints only need to be sufficient, not pretty.

I expect to slow down the printer (and use higher infill) for the final prints, once the design is settled.

If you print with settings that hit the maximum flow rate for your extruder, you’ll minimize time-per-part regardless of the feedrate. Big, fat extrusion strands at 30mm/s can out-print little strands at 150mm/s.

You’ll need to experiment or compare notes with other people using the same hot end to find the flow rate limit for your printer. For example, an E3Dv6 with a 0.4mm nozzle can print perhaps 8-10 mm^3/sec of PLA with a good extruder drive. Whereas a Lite6 with a PTFE liner might only be able to do half that before having extrusion problems, because it can’t melt plastic as fast. Different filament types have different limits – for example ABS can print >50% faster than PLA with the same hardware because it’s easier to melt.

@Ryan_Carlyle Well, yes. You are describing the experiment I have up in Cura on the other screen.

My luck of last night was throughly balanced by today’s attempts with lots of failed prints. Starting to suspect that the common thread through many/most of my failed prints is the printer losing it’s Z-placement relative to the bed between prints. Seems to happen a lot.

Currently have a print about a third of the way in, but I am expecting a failure. The supports have broken from the rafts in a few places, and the spool is down to the last winds of filament. Have not as yet tried adding another spool of filament in the middle of a print. Inclined to let this print fail, and start over.

I am using a Monoprice Maker Select Plus (rebranded Wanhao Duplicator i3 Plus) with whatever cloned hot-end and extruder they shipped at the time my unit was manufactured (likely this April, or just prior). What sort of flow rates work through it’s 0.4mm nozzle? Dunno.

Been printing at 150mm/s with a 0.3mm layer height. Can the printer do 100mm/s at a 0.4mm layer height? Certainly reduces the print time - if it works. Going to find out.

Current print I am inclined to let fail. Nearest supports are broken loose from that raft, and the spool is down to the last winds of filament. 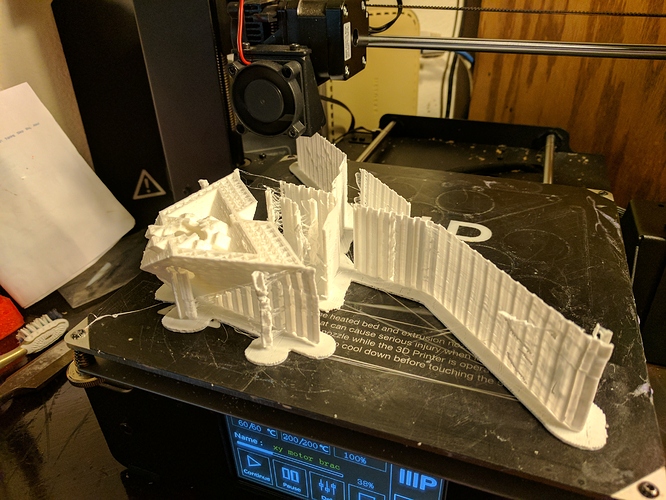