Issue with alignment when cutting and engraving

First I am quite new to most all of this so bear with me.

I created a template in Inkscape that was rows of circles with a little text inside that I plan to use to engrave small coated metal tags. The thought was to burn in the circles on cardboard and lightly engrave the text to ensure alignment. Then I would lay the tags inside each circle and engrave each.

When I lightly cut the circles onto cardboard one in the top right overlapped another, although my image file does not have them overlapping…

Next I lightly engraved the text and the alignment is off. I double checked the imported image and it’s not off, so why is the laser not aligning the elements of my project?

Thanks for any suggestions!

Would be useful to know some history of the problem:
New?
Did this or something like it ever work before.

He had probably belt issue before.

My laser went rogue...! Is this unusual? K40 Laser

New K40 user here, still trying to learn this thing and Inkscape as well. I had done a simple job with a small box that had some text engraved and then cut it out. I made an adjustment to the file to change the text and reloaded the file and repeated the job. But the second time when the job was completed the laser made a sound like the belt was slipping on the gears and then the laser started cutting a new random line. Once I aborted the job (shoulda just hit the laser off button on the control…

Thanks for the replies guys. The belt seems pretty tight but I will research checking them properly and adjusting if needed. I have attached a picture that shows 3 things. First in the upper right you can see the two circles that overlapped, although my original file has all circled spaced evenly. Next you can see the text is off center although again in the imported file it’s all centered. Lastly I just noticed that in one circle it didn’t mark the year 2020. All this is very odd to me.

The laser is basically brand new, I have done a few small jobs just trying to learn it. I am using the newest version of Inkscape and K40 Whisperer to run my laser.

Thanks again for any advice! Dan 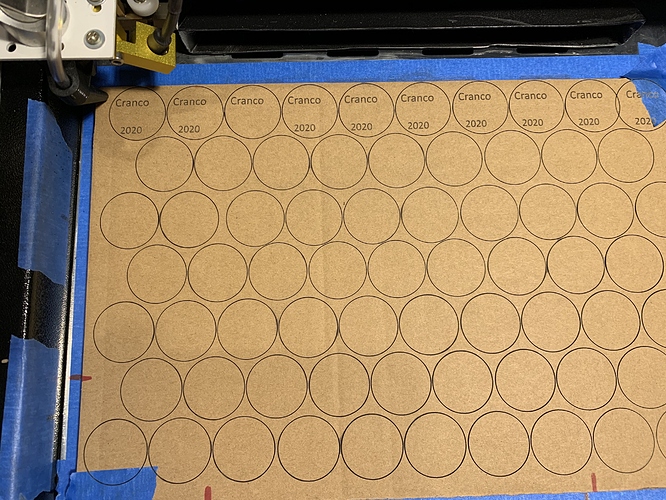 Don the laser is pretty new, and I am new to using Inkscape and K40 Whisperer, and it’s likely I am doing something wrong!

In addition to what you noticed is:
Mechanical/electrical:
Does the circle get more elliptical as it approaches the bottom?

Software:
The text is consistently off-center so that does not seem mechanical?
Does the missign text happen every time you run the job or is it intermittent? If it repeats it may point to the software.

Software:
*Try simpler and different jobs like squares with internal text and see if anything works correctly or provides more clues.
*Run the same job characteristics with the stock software.

Also make sure the circles on the end at the right are within the work area that the head can reach. There are no endstops on the right so if the head tries to move to far to the right it will hit the rail and the belt will skip teeth. This would cause all subsequent actions (where there is no rehome) to be shifted.

Don, I will look into all of your suggestions. Quick answer, the circles are not elliptical, it was the angle of the photo. I agree that all text is evenly off center so this does not seem to be from loose mechanical parts like the belt or gantry, etc.

Thanks for the ideas of things to check, will update when I learn more.

So I did another test run for this project on cardboard to see if the alignment issue was still there. This time it’s all aligned properly. I don’t know what happened last time, as I recall I had the work piece taped down from the start so I don’t think it moved during the job. Who knows, if I see this again I will dig in further. Thanks for the responses everyone! 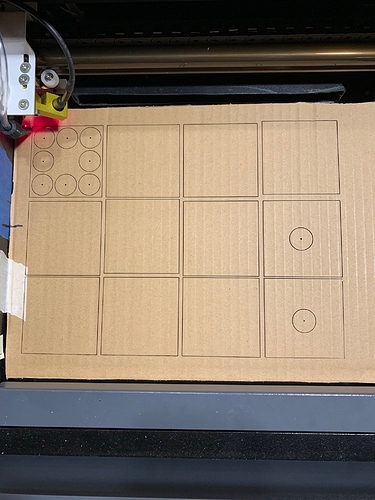 Grid alignment issue1512×2016 719 KB
OK Ned I understand now what you said if the object is out of the work area. I was about to post a new topic with this image since there is an alignment issue here as well. (all boxes in the source file are aligned perfectly) I did hear the belt skip once during this job so probably that is what happened. I think I will retry this job with less boxes and make sure all are well within the work area and hopefully it corrects the issue. Just an update I guess.
StephaneBUISSON (Stephane BUISSON) May 9, 2020, 7:37am #12

Also seen in the past :

Belt are tight (maybe too much), then the cog wheel spin loose on the axle…